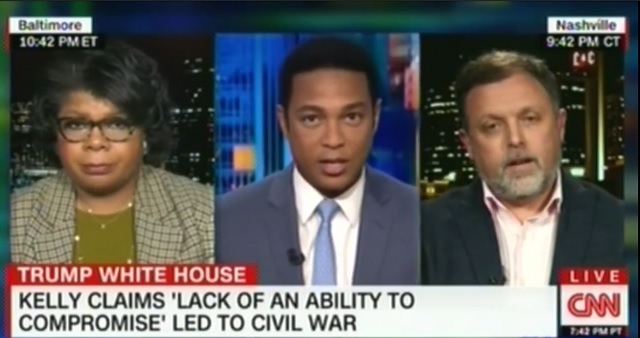 Asking the White House and President Donald Trump whether they believe “slavery was wrong” is a “legitimate question,” according to CNN’s Don Lemon.

“The question is, does this administration believe, does the president believe slavery was wrong? And before you answer, Mary Frances Berry, a historian, said in 1860 there was a compromise. The compromise was to have Southern states keep slavery but the Confederacy fired on Fort Sumter that caused the Civil War. And because of the Civil War, what happened? The North won,” Ryan said.

Sanders blew off the question, saying, “I think it is disgusting and absurd to suggest that anyone inside of this building would support slavery.”

Don Lemon had Ryan on his show Wednesday night to back her up.

“Of course it’s a legitimate question, and it’s a very simple answer,” Lemon said. “She could have said, yes absolutely we believe that slavery is wrong, but she can’t because she’s in a tough spot because she has to defend someone [Gen. Kelly] who says that Robert E. Lee put the state over the country at that time, I think that’s the definition of treason there, compromise on what?”

He went on to speak with far-left extremist Tim Wise who said Gen. Kelly is “unbelievably pathetic” and “pandering” to “racists.”

In the run-up to the 2016 election, Tim Wise, who CNN and others present as an “anti-racist,” told all Trump supporters, “you are my enemy” and said “I will not seek to coexist with you” after they lose the election. Wise said if the US falls into a civil war after the election because Hillary Clinton won, “I have no problem — and I mean NONE — with making sure they are done as a political force in this country. Interpret that however you wish.” This is who CNN presents as an “anti-racist” and “moderate” voice.