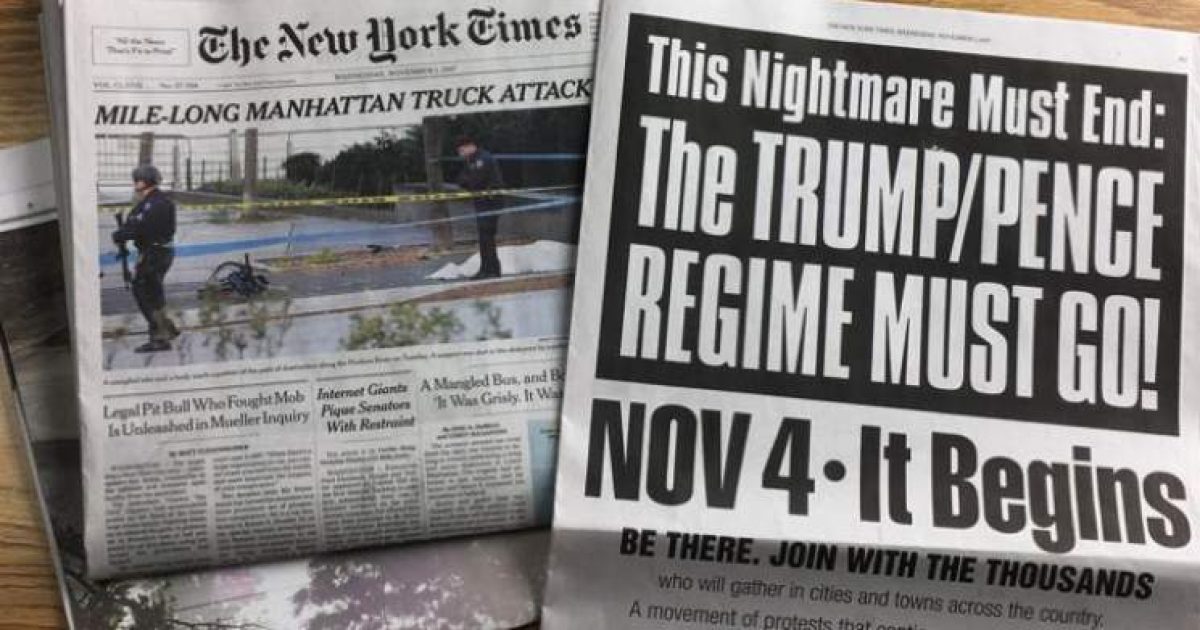 A full-page advertisement in the New York Times promoting insurrection this Saturday, November 4 states “This Nightmare Must End: THE TRUMP/PENCE REGIME MUST GO!”

“Nov. 4 It Begins,” the ad continues. “Join with the thousands who will gather in cities and towns across the country. A movement of protests that continue every day and night, growing until we become millions… determined now to stop until this regime is driven from power.”

RefuseFascism.org is where the advertisement directs fellow Communists and Fascists “To Find a Protest Near You.”

As we have pointed out before, the website promotes planned riots and insurrection disguised as “protests” in Boston, Chicago, Atlanta, Cincinnati, Austin, Seattle, Portland, Los Angeles, New York City, Omaha, and other cities.

Notice they are not showing up in the South except in Atlanta because they know they will get zero support, and probably a ton of opposition. That’s because they are cowards and their cowardice is expressed in the fact that they won’t show their faces in most cases.

We’ve previously reported on the November 4 insurrections planned around the country. In September, I warned you that this was coming.

According to RefuseFascism.org, the Soros and Hillary Clinton-funded Communists will be taking “To The Streets And Public Squares in cities and towns across the country continuing day after day and night after night—not stopping—until our DEMAND is met.”

Though they claim “in the name of humanity” to “refuse to accept a fascist America,” they are all to eager to impose a Marxist one.

They refer to the “Trump/Pence regime” as a “nightmare” that “must end” and “must go.”

They believe they are a nightmare for the following reasons:

Here’s the ad ran in NYT. 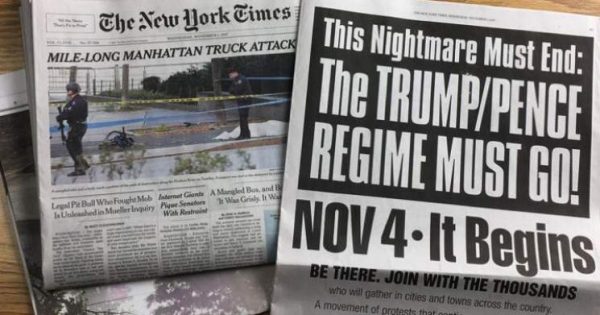 Can you imagine the outrage if a Christian organization wanted to promote a rally to abolish abortion in the NYT? I’m sure they would be promptly turned down.

Yet, here is a media rag that is state-controlled, and we know they are state controlled, offering advertisement for a group that has ties to known Communists, Fascists and Islamists.

NYT is about as anti-American as you can get!

“In the name of humanity”? The Revolutionary Communist Party/Refuse Fascism fanatics still believe that Mao was fully justified in murdering tens of millions of Chinese and torturing, imprisoning, and enslaving hundreds of millions more. The RCP/Refuse Fascism cadres form a major component of the masked, black-clad Antifa thugs who have been rioting and causing mayhem throughout America for the past year.

It’s no secret that the New York Times has been pro-communist for over a century. From covering up Stalin’s genocide of millions of Ukrainians to helping make Fidel Castro the dictator of Cuba, to glorifying Mao Zedong, to romanticizing communist Weather Underground terrorist Bill Ayers — and much, much more, the Times has been foremost among media organizations promoting communism worldwide. In fact, this year, in celebration of the hundredth anniversary of the Bolshevik Revolution, the Times has run an appalling series of articles under the heading “Red Century” that wistfully pine for the romantic era of the gulag and the Lubyanka.

This is not the first time that the Times has aided the RCP/Refuse Fascism communists by running an ad for their subversive operations. As we reported in January, the Times ran a similar full-page ad for RCP/Refuse Fascism to gin up support for the mayhem that was unleashed on President Donald Trump’s inauguration.

These people are not set to engage in peaceful demonstrations or redressing their government for grievances. They are out for blood.

As we reported earlier today:

According to Politico, their increasingly violent tactics have caused the Department of Homeland Security to officially classify their activities as “domestic terrorist violence”…

Antifa is not about free speech nor is it about being anti-fascist. It’s about totalitarianism and Communism. It knows nothing of freedom, but rather slavery. It must be opposed.