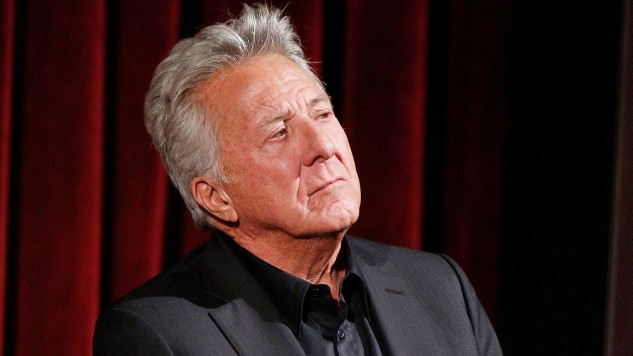 Hellywood is being fumigated.

In the ongoing Sexgate that began after the New York Times — having known about it for years — outed now-disgraced Hollywood mogul Harvey Weinstein as a sexual abuser and rapist, more actors are now accused.

In an essay for The Hollywood Reporter published yesterday (Nov. 1, 2017), former production assistant Anna Graham Hunter describes how she was repeatedly groped and harassed by Oscar winner Dustin Hoffman while working as an intern on the 1985 TV movie adaption of “Death of a Salesman”. Hoffman also harassed another production assistant named Elizabeth, saying he wanted her “right breast” for lunch. At the time, Hunter was only 17, a senior in high school, while Hoffman was 48 years old.

According to Hunter, who had described what Hoffman did in a series of letters to her sister during her internship, Hoffman’s sexual harassment persisted over the course of days:

“He [Hoffman] was openly flirtatious, he grabbed my ass, he talked about sex to me and in front of me. One morning I went to his dressing room to take his breakfast order; he looked at me and grinned, taking his time. Then he said, ‘I’ll have a hard-boiled egg … and a soft-boiled clitoris.’”

“When I was walking Dustin to his limo, he felt my ass four times. I hit him each time, hard, and told him he was a dirty old man. He took off his hat and pointed to his head (shaved for the part) and said, ‘No, I’m a dirty young man, I have a full head of hair.’”

“This morning when I asked Dustin what he wanted for breakfast, he said something that beat even his lows. It was worse than anything anyone has ever said to me on the street. It was so gross I couldn’t say anything. I just turned around and walked out.”

One day, when infamous womanizer Warren Beatty was visiting the movie set, Hoffman told Hunter: “So Anna, I get Warren tonight, you get him Tuesday?” followed by, the next day, “You might as well have undressed yourself. You were saying, ‘F—k me, f—k me, Warren.’”

Hoffman, now 80 years old, responded to Hunter’s accusations: “I have the utmost respect for women and feel terrible that anything I might have done could have put her in an uncomfortable situation. I am sorry. It is not reflective of who I am.”

On Oct. 30, 2017, actress Ariane Bellmar tweeted that Jeremy Piven had groped her both on the set of the HBO TV show Entourage, as well as at the Playboy Mansion, which put the incidents sometime between 2004 and 2011.

According to Bellmar, Piven cornered her in his trailer on the set of Entourage and groped her breasts. When she tried to leave, he grabbed her butt. Bellmar said Piven also sent “abusive, explicit” texts to her phone.

In a statement to Deadline Hollywood, Piven, 52, denies everything:

“I unequivocally deny the appalling allegations being peddled about me. It did not happen. It takes a great deal of courage for victims to come forward with their histories, and my hope is that the allegations about me that didn’t happen, do not detract from stories that should be heard.”

“Today, via the press reports, is the first we are hearing about Ariane Bellamar’s allegations concerning Jeremy Piven. Everyone at HBO and our productions is aware that zero tolerance for sexual harassment is our policy. Anyone experiencing an unsafe working environment has several avenues for making complaints that we take very seriously.”

Piven is currently starring on CBS’s Wisdom of the Crowd. CBS also issued a statement to Deadline Hollywood:

“We are aware of the media reports and are looking into the matter.”

I’ve never liked Jeremy Piven, finding him to be a terrible actor. He was the weakest actor on the British TV series Mr. Selfridge, which was co-produced and broadcasted by PBS. I would cringe every time he opened his mouth.

The Hollywood Reporter reports, October 31, 2017, that actor and unfunny “comic” Andy Dick, 51, who has a history of exposing his genitals in public and on stage, was fired from the independent feature film Raising Buchanan following accusations of sexual harassment and misconduct on set.