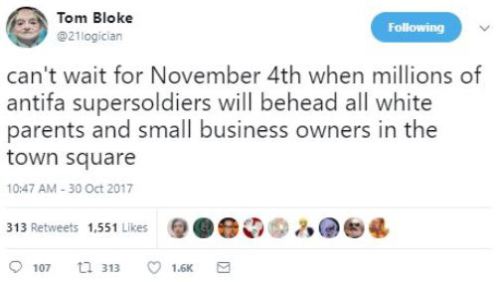 Antifa, the communist group identified by the Obama administration in April 2016 as “domestic terrorists,” has declared today, November 4, to be a day of “revolution” in the United States.

They even took out a full-page ad in the New York Times to that effect.

According to InfoWars, the ad was written by Refuse Fascism, a communist group funded by George Soros which took responsibility for shutting down a conservative event hosting journalist Milo Yiannopoulos at U.C. Berkeley last February.

On October 30, 2017, an individual identified by Gateway Pundit as a leader of Antifa, Tom Bloke @21logician, tweeted a menacing threat, that on November 4, millions of Antifa “supersoldiers” will decapitate white parents and small business owners:

Bloke took down that tweet, but not before other Progressives responded to the threat with enthusiasm. As an example:

It turns out Tom Bloke’s tweet is actually a retweet of an earlier tweet by Krang Nelson @KrangTNelson:

Tom Bloke @21logician told Chris Caesar of Mic that he has no affiliations with Antifa. (Bloke’s Twitter page says he’s in New Zealand.) He said he published the tweet to protest Twitter’s (temporary) suspension of Krang, and that “Tom Bloke” isn’t even his real name. Bloke said in a direct message to Mic:

“It’s baffling to me that such an obvious joke — stolen from another guy, as a joke — turns into an article where I’m suddenly cited as an antifa leader. “he right-wing fake-news machine is on another level of stupid that is hard for me to understand. I don’t even like antifa that much.”

As for Antifa’s revolution today, Mic claims it, too, is not true, and blames the hysteria on InfoWars:

The Nov. 4 conspiracy centers on alleged antifa documents that call for violence aimed at fomenting a ‘civil war’ between Trump supporters and antifa on Nov. 4. Much of this wild speculation seems derived from a deeply dubious and widely shared report on right-wing conspiracy hub InfoWars by YouTuber and blogger Paul Joseph Watson.