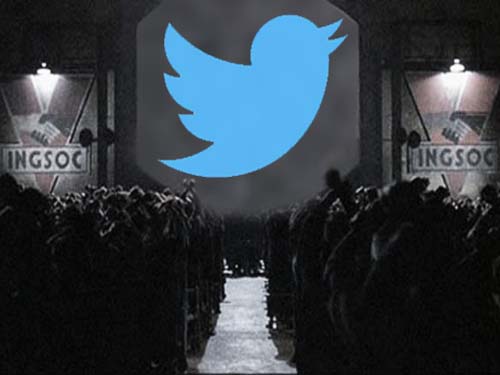 During a recent hearing of the Senate Judiciary Committee Subcommittee on Crime and Terrorism, a lawyer for the social media giant Twitter openly admitted that the company had deployed “election algorithms” that specifically censored hashtags that exposed the corruption of both candidate Hillary Clinton and the DNC as a whole.

The testimony, given by Sean Edgett, Acting General Counsel for Twitter, seemingly proves that the tech giant used the discredited idea of “Russian manipulation” to actually censor legitimate content that exposed their preferred candidate, Hillary Clinton.

“Before the election, we also detected and took action on activity relating to hashtags that have since been reported as manifestations of efforts to interfere with the 2016 election” Edgett said, in a clear indication that the company is justifying censoring content that reflected badly on Clinton by using the reporting of the very establishment news outlets that have openly worked against Donald Trump from the beginning.

“For example, our automated spam detection systems helped mitigate the impact of automated Tweets promoting the #PodestaEmails hashtag, which originated with Wikileaks’ publication of thousands of emails from the Clinton campaign chairman John Podesta’s Gmail account.”

Keep in mind, Twitter hasn’t actually provided any evidence that the censored content was automated and we already know the company itself is strongly anti-Trump.

Edgett continued, “The core of the hashtag was propagated by Wikileaks, whose account sent out a series of 118 original Tweets containing variants on the hashtag #PodestaEmails referencing the daily installments of the emails released on the Wikileaks website.”

“In the two months preceding the election, around 57,000 users posted approximately 426,000 unique Tweets containing variations of the #PodestaEmails hashtag. Approximately one quarter (25%) of those Tweets received internal tags from our automation detection systems that hid them from searches.”

So roughly one fourth of all tweets containing information about the incredibly important Podesta emails were straight up censored by the platforms search engine, again explained away as some valiant effort to stop automation from the evil Russians. (Who the Clinton campaign themselves actually indirectly worked with to spread disinformation about Trump.)

The lawyer went on to then stunningly say (as if it were a good thing) that the company had censored almost HALF of the Tweets that had anything to do with the leaked emails from the DNC which revealed that the entire Democratic primary was a complete sham that was rigged in favor of then candidate Clinton and eventually resulted in the resignation of corrupt DNC chair Debbie Wasserman Schultz shortly before the convention.

“As described in greater detail below, our systems detected and hid just under half (48%) of the Tweets relating to variants of another notable hashtag, #DNCLeak, which concerned the disclosure of leaked emails from the Democratic National Committee.”

The company also neglected to even mention whether or not their supposed fight against automation was as protective of Trump as they admittedly were of Clinton. Considering what we know about the liberal mindset of the company, one can imagine that most of the employees themselves were highly unlikely to do anything that could be seen as helping Donald Trump.

Another, perhaps even more important point on the testimony from Twitter came from Infowars Jerome Corsi who wrote, “Perhaps the Senate Judiciary Subcommittee should refer Twitter’s admission in its prepared testimony submitted under oath to various law enforcement and regulatory authorities, including the Federal Election Commission and the Department of Justice, to see if Twitter’s pattern of censoring tweets during the 2016 election campaign constituted “collusion” with Hillary Clinton’s campaign.”

“This admission opens the door to Congress demanding that Twitter, as well as other social media giants including Facebook and Google/YouTube, explain the full range of detection systems they used in the 2016 campaign to censor out content favorable to Trump or critical of Clinton in what appears to have been an effort to influence the outcome of the election.”

It seems each week a new revelation comes out that adds another piece of evidence in the now long list of facts that point to a massive operation between the Clinton campaign, the deep state, and the mainstream media to spread propaganda to the American people in a failed “anything goes” bid to stop Donald Trump from becoming president.

Last week it was even revealed that the Clinton campaign itself had paid for the disinformation that was eventually written in the infamous “Trump dossier” by deep state operative Christopher Steele and sourced by Russian intelligence. This disinfo was then subsequently spread around as if it were a credible piece of investigating.