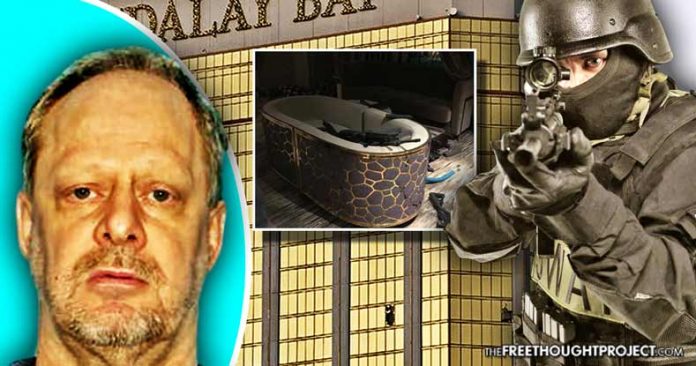 Some of the most glaring changes in the timeline have revolved around the account of Mandalay Bay Hotel security guard Jesus Campos, who was reportedly injured by suspected shooter Stephen Paddock. Campos went from being just another causality in the shooting to Paddock’s first victim, who was shot only once in the leg, despite the fact that the shooter fired 200 rounds down the hallway in his direction.

During an interview on Fox News with Tucker Carlson, an attorney for the victims revealed that not only did police officers respond to Campos after he was shot, they were right outside of Paddock’s door before he began shooting out of his hotel room window.

The conversation came up while Carlson and Eiland were discussing the mysterious circumstances surrounding both Campos’ story and how tightly he has been controlled by MGM Grand.

“Maybe they’re concerned of what he’s going to say. Maybe they’re concerned he’s not going to stick with the MGM story,” Eiland said. “But eventually he will be examined under oath by attorneys in these cases and so it’s going to be important to know the timeline from what he says and from what the other two—now we know that there were two other police officers on the floor with him prior to the shooting—those are all questions that have to be answered and they eventually will be.”

Carlson responded to the revelation by asking, “Just to be clear—not Las Vegas Police Department, but MGM employees acting as security?”

“No. There was a report yesterday that there were two off-duty officers on the floor that responded to Campos prior to the shooting beginning,” Eiland confirmed for the third time.

Eiland also noted that MGM Grand claims to have a “corporate watch center” that trains its employees to report any suspicious activity. So if a guest arrived at Mandalay Bay Hotel with 27 rifles and 5,000 rounds of ammunition stored in 10 bags, why didn’t the employees who helped him, or the cleaning service who visited his room regularly, report suspicious activity? And if they did, why wasn’t it addressed?

“I do think that after 30 days, we ought to be having more information than we have right now. For example, we know bits and pieces. We know that he arrived with 10 bags. We know that two bellmen helped him carry those bags up. Then we find out that those 10 bags had guns in them and 5,000 rounds of ammunition. We know that MGM claims to have a ‘If you see something, say something’ policy—and you’re telling us that nobody saw those guns over a 5-day period? No maid, no housekeeping, no food service ever saw any of the guns? Nobody saw him using power drills in the hallway? Nobody saw him setting up security cameras? These are all things that need to be answered.”

As The Free Thought Project has reported, while the FBI’s timeline of the shooting continues to change, some of the most compelling questions have remained unanswered since Day 1, such as, why has no security footage of the shooter been released, despite the fact that he allegedly stayed in one of the most popular hotels in Las Vegas for several days before the shooting?