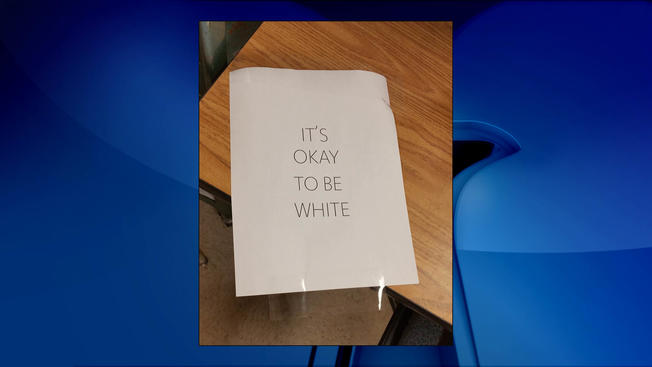 A plain flyer saying “it’s okay to be white” may be “part of a concerted national campaign to foment racial and political tension in our school and community,” according to Montgomery Blair High School principal Renay Johnson.

Johnson assured the media Wednesday his school would not “fall victim” to such “attempts to divide us.”

Fliers saying “it’s okay to be white” were found taped to the exterior doors of a Maryland high school Wednesday morning, apparently as part of an effort to spark racial division.

The principal at Montgomery Blair High School in Silver Spring sent a letter home to families informing them that the signs were discovered on 10 doors at 5:45 a.m. and removed by staff before students arrived for ­classes.

“We are taking this seriously and are investigating this incident,” wrote Renay Johnson, the school’s principal. “Our research so far has indicated that this may be part of a concerted national campaign to foment racial and political tension in our school and community. The same flier was posted in other cities and communities this week.”

Johnson described the school community as “smart, diverse and inclusive” and said it would not “fall victim to attempts to divide us.”

“We are committed to providing a safe and welcoming environment for every student,” the principal’s letter said.

Stickers bearing the same message were discovered Wednesday morning on light poles and electrical boxes in Cambridge, Mass., according to a report in the Boston Globe. Similar signs were found on the campus of Tulane University in New Orleans, and in Rocky River, Ohio.

The posters are part of a 4chan campaign seeking to trigger wild overreactions to the simple statement, “it’s okay to be white.”

Needless to say, it worked.

Similar hysterical reactions have occurred across the Western world. This is perfect. “It’s okay to be white” forces the left to show how much they hate ideas that are simply not their own. pic.twitter.com/52GL8pfbM9

Security image shows person who put up "It's okay to be white" flyers at Montgomery Blair High School https://t.co/phU1ZPir5e pic.twitter.com/q22Mqwwnjx