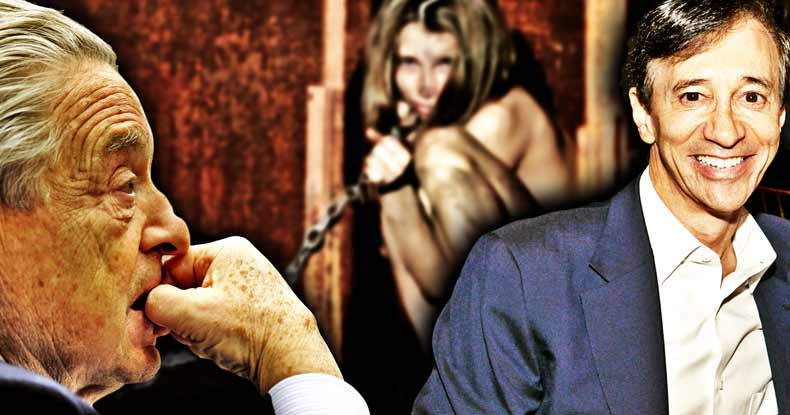 According to the lawsuit, Rubin would lure the girls to New York on JetBlue flights after connecting with them on Instagram. Once they arrived in Manhattan, Rubin would drug them, gag and bound them, and then violently beat and rape them while in his sex dungeon. The lawsuit states that he hit a woman so hard that she passed out as he demanded she call him “daddy.”

“I’m going to rape you like I rape my daughter,” he would say according to two of the alleged victims. He would then attack and punch them so violently and aggressive, that one of his blows “flipped” a woman’s breast implant.

As the Mail reports, they say he then covered up the alleged rapes and attacks and hushed them by paying them up to $5,000 each.

According to the Mail:

Rubin, a notorious Wall Street trader who is blamed for incurring $377million of losses at Merrill Lynch in 1987 and who is featured in Liar’s Poker, has not yet responded to their allegations. He is named alongside associated Stephanie Shon, Jennifer Powers,  and lawyer Yifat Schnur in the lawsuit.

Rubin has been married since the 1980s to his former Harvard Business School classmate Mary Henry. They have three children together.

The lawsuit describes four different incidents in 2016. The women sometimes traveled to meet him in pairs and on other occasions they went alone, they said.

According to the lawsuit, Rubin’s associates Stephanie Shon and Jennifer Powers—a former model who claimed to have slept with Rubin—acted as recruiters for the man’s sadistic plan. The models were offered thousands of dollars and given posh treatment and plane tickets to New York in exchange for their ‘companionship’ with Ruben.

“Shon indicated that she worked for Howard Rubin, and that Rubin, who had seen images of her on Instagram, would like to meet her in New York. While Shon initially identified Rubin by name, she then insisted that the woman refer to him only as “H” so as to protect Rubin’s identity,” the lawsuit reads.

“Powers assured her that Rubin was “a great guy,” and would not do anything to make her feel uncomfortable. Powers told her that if she ever felt uncomfortable she could simply ask to leave, and would not only be allowed to do so, but would still be paid the initial $2,000 for her time,” it continues.

Once their planes landed, they were forced to sign non-disclosure agreements before they were allowed to meet the billionaire.

The women then met Rubin at a nearby bar for dinner and drinks where they were drugged, beat, and raped before he would leave them “to go home to his wife and kids,” the lawsuit states.

The victims were often beaten so badly that they required medical treatment. According to the lawsuit, they were given more money and their medical bills paid in exchange for their silence.

The women claim in the lawsuit that they returned because they were afraid of what he may do to them if they did not appear to appease him.

According to the Mail, in 2008 Rubin came out of retirement after heading up Bear Stearns to manage a Mortgage-Backed Securities Fund for financier George Soros, run by Soros Fund Management, LLC. He quit the firm in 2015.

John Balestriere, a lawyer for one of the women told DailyMail.com in a statement:

While arrogance and self-import may convince certain men otherwise, neither money nor power gives any person the right to victimize a woman. It is our collective responsibility to ensure that victims’ voices are heard, and that abusers’ positions of privilege do not exempt them from the grasp of justice.

Balestriere went on to encourage his other alleged victims to come forward.

We implore other victims of the Enterprise to contact us.

As the Free Thought Project has previously reported, the world of the financial elite, as described by a former insider, is often horrific and sick.

Ronald Bernard is a Dutch entrepreneur whose drive and business contacts quickly catapulted him into the world of the financial elite. However, the deeper into this world Bernard went, the more horrifying it became. In a jaw-dropping interview with De Vrije Media, Bernard details this dark and depraved elite society which he says conducted human sacrifice and celebrated destruction.

In the interview, Bernard shares details about the way this banking society had its members commit unspeakable crimes to people — including children — to test and blackmail them.

“I was warned off when I got into this – don’t do this unless you can put your conscience 100% in the freezer. I heard myself laugh at it back then, but it wasn’t a joke at all.”

“So I was a guest in those circles and it amused me greatly to see all those naked women and the other things. It was the good life. But then at some moment, which is why I am telling you this, I was invited to participate in sacrifices abroad.”

At this point in the interview, the elite banker describes the final straw that forced him to get out and come clean — sacrificing children.

“That was the breaking point. Children.”

“You were asked to do that?” asks the interviewer.

“Yes, and I couldn’t do that,” Bernard explains. “And then I started to slowly break down. I lived through quite a lot as a child myself and this really touched me deeply. Everything changed. But that is the world I found myself in. And then I started to refuse assignments within my job. I could no longer do it. Which made me a threat.”

In the interview, Bernard explains that these same tactics are used worldwide to blackmail politicians and those in authority. These allegations against Rubin could very well be these same practices described by Bernard.