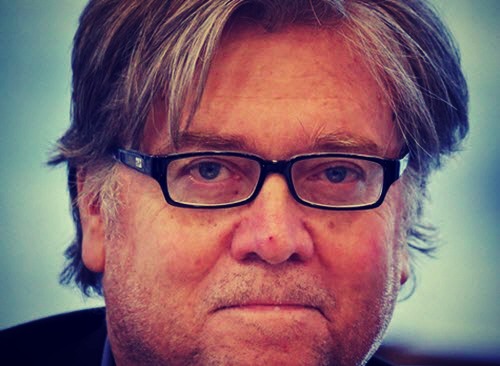 Speaking at a conference held by the Remembrance Project which is made up of families who have lost loved ones at the hands off illegal aliens, Bannon destroyed the notion that support for illegal immigration is based on caring about the actual people who cross into the country illegally.

“We could stay up here all weekend and do this,” Bannon noted as he read off a list of Americans who have been killed. “And each of the victims stories is heart-rendering. But what gets me is what about the American victims dreams? Why are illegal aliens called DREAMers and not the victims?”

Bannon noted that the Americans killed by illegal immigrants aren’t simply a tragedy that just randomly happened but rather are a direct effect of the elites in the country supporting them.

“And by the way, this just doesn’t happen,” Bannon said. “This is not some random law of the universe, this is not physics, okay. This is an act of commission. The elites in this country, the economic, political, and the media elites allow this to happen because they want it to happen”

“The multinational, globalist corporations want cheap labor, and the progressive Left wants cheap votes.” “This is not a conspiracy. And you are not wing-nuts. This is in broad daylight. And if sites like Breitbart and someone like Donald J. Trump had not given you a voice, it’d be totally hidden.”

Despite the benefits of mass illegal and legal immigration for multinational corporations and Democratic politicians — as immigrants are far more likely to vote for Democrats — the impact on Americans has been detrimental.

As Harvard University economist George Borjas has noted, “illegal immigration reduces the wage of native workers by an estimated $99 to $118 billion a year and generates a gain for businesses and other users of immigrants of $107 to $128 billion.”

Every year, at least 1.5 million illegal and legal immigrants enter the U.S. every year, driving down the wages of American workers and costing American taxpayers at least $116 billion every year, as Breitbart News reported.

Bannon also took aim at Republicans in Congress who continue to push for amnesty for illegal immigrants already here.