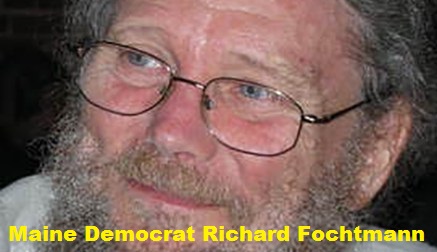 This post was originally published by Fellowship of the Minds

Richard Fochtmann was a 2016 Democratic candidate for District 22 of the Maine State Senate. He ran unopposed in the state’s Democratic primary election on June 14, 2016.

This is the kind of man whom Maine Democrats chose to run for the State Senate.

At a Values and Vision Summit held by the Maine Democratic Party in April 2017, Fochtmann was talking about how more women should be involved in the Democratic Party in his state, when he interrupted himself and began sharing a thought he’d had about a statistic he had seen recently:

“Today, you know, I saw a thing, and it said a lot of men — white men — are committing suicide. I almost thought, ‘Yeah, great!’”

At this, Fochtmann’s audience of Democrats began laughing because, you know, increasing numbers of white men committing suicide is just such a funny thing.

Fochtmann then admitted that “Then I thought about it little more, and I thought maybe I shouldn’t say that out in public,” which of course he did.

Fochtmann is a Jewish surname. (Source)

The incident was captured on cellphone video and tweeted by conservative news website Maine First Media, then picked up by other conservative media outlets. To watch the video and hear pony-tailed Fochtmann and the attendant Democrats joke and laugh about white male suicides, go here.

But the Maine Democratic Party said nothing until a few days later, only to blame the “far right” for publishing the video recording of Fochtmann and spreading “disinformation”.

What if the voters had selected Fochtmann? Maine Democrats would have had a sitting State Senator making jokes about white men committing suicide and celebrating the rise in incidents. […]

The crowd clearly was laughing at Fochtmann’s suicide joke. Maine Democratic Party chairman Phil Bartlett was in the crowd, as well. Did he laugh, too? […]

This isn’t a conspiracy to frame Democrats. The Maine Democratic Party trying to play victim after they used suicide as a punchline is morally wrong and absolutely heartless.

Suicide is a real issue and it is above partisan politics, contrary to what the Maine Democratic Party believes.