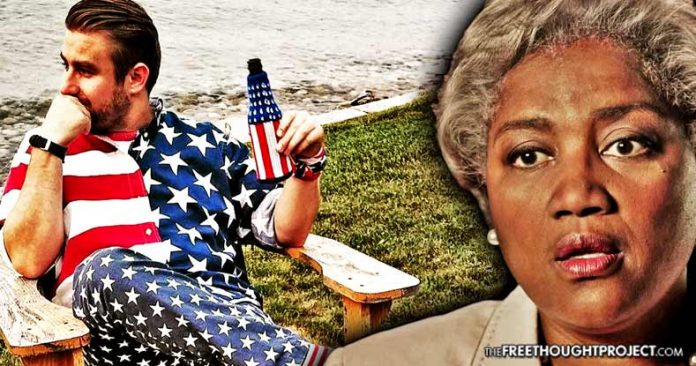 While it is no secret to anyone whose news sources go beyond the mainstream media that the Clinton campaign controlled the Democratic National Committee during the 2016 election, the party’s former chairwoman is revealing that one of the DNC’s greatest scandals made her fear for her life.

When DNC Staffer Seth Rich was murdered on July 10, 2016, the mainstream media attempted to play it off as a botched robbery, trying to convince the public that Rich, who is said to be the source who turned over thousands of DNC emails to WikiLeaks, was not targeted.

Brazile stepped in as the acting chair of the DNC on July 28, 2016, after the leaked emails revealed a cozy relationship between former chair Debbie Wasserman-Schultz and the Clinton Campaign. In her new book, “Hacks: The Inside Story of the Break-ins and Breakdowns that Put Donald Trump in the White House,” Brazile is revealing that she was terrified she would be blamed for the leaks.

In an overview of the forthcoming book, the Washington Post noted that Brazile admitted she “feared for her own life” after Rich was murdered. Now, over one year has passed, and the murder is still unsolved and arguably covered up both law enforcement and the media.

“Brazile writes that she was haunted by the still-unsolved murder of DNC data staffer Seth Rich and feared for her own life, shutting the blinds to her office window so snipers could not see her and installing surveillance cameras at her home. She wonders whether Russians had placed a listening device in plants in the DNC executive suite.”

The Post also reported that when the emails were first leaked, top Democratic officers were encouraged not to talk about what they referred to as a “hacking.” However, it was later revealed that the emails weren’t accessed by way of hacking, they were leaked by a DNC insider.

“At first, Brazile writes of the hacking, top Democratic officials were ‘encouraging us not to talk about it.’ But she says a wake-up moment came when she visited the White House in August 2016, for President Obama’s 55th birthday party. National security adviser Susan E. Rice and former attorney general Eric H. Holder Jr. separately pulled her aside to urge her to take the Russian hacking seriously, which she did, she writes.”

While Brazile admits she was terrified she would be blamed for the leaked emails, she seems to buy the story that the “Russians” were responsible for “hacking” into DNC email accounts.

“Brazile describes her mounting anxiety about Russia’s theft of emails and other data from DNC servers, the slow process of discovering the full extent of the cyberattacks and the personal fallout. She likens the feeling to having rats in your basement: ‘You take measures to get rid of them, but knowing they are there, or have been there, means you never feel truly at peace.’”

As The Free Thought Project has reported, not only was there no evidence of “Russian hacking,” but there is no evidence of ties between the Russian government and WikiLeaks, the organization responsible for publishing the leaked emails.

Brazile’s “The Russians did it!” themed claims fall in line with the story that has been promoted by the mainstream media from the beginning.  For example, when speaking on the subject of “Trump & Russia,” CNN Anchor Jake Tapper said, “And people in the U.S. Intelligence Community—although Assange denies it—say that Assange has worked, and WikiLeaks has worked with the Russians.”

“With the Russians, yes,” Reporter Pamela Brown replied. “They believe that they are a propaganda arm of the Russian government.”

However, as WikiLeaks noted, President Obama, FBI Director James Comey and Director of National Intelligence James Clapper all explicitly said that there was no evidence of connections between WikiLeaks and the Russian government.