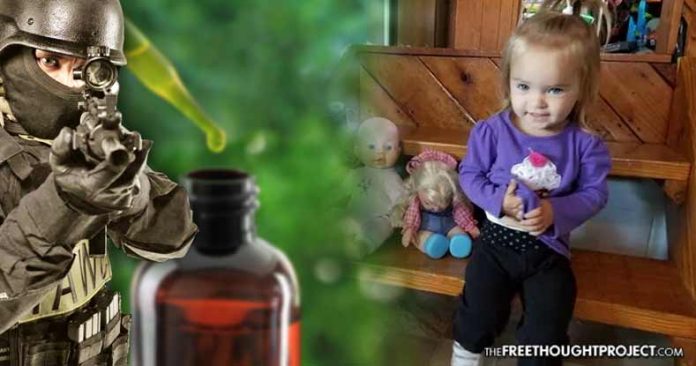 “I would look outside my window just scared to death I would see a police officer and CPS here to take my kid.”

It’s a nightmare made entirely by the State. A little girl would be snatched away from caring parents for doing nothing more than healing their daughter’s debilitating condition with a plant extract.

Even though medical cannabidiol (CBD) is now legal in Indiana, Child Protective Services (CPS) was going to take 20-month-old Jaelah Jerger—because her parents chose to use legal CBD oil instead of a harmful pharma drug. Fortunately, and ironically, this assault was stopped in the nick of time by an Indiana state legislator.

Jaelah suffered about 40 epileptic seizures a day, and was being seen by doctors at Riley Hospital for Children. They recommended the drug Keppra, with known side-effects of “drowsiness, dizziness, unusual tiredness or weakness.”

Instead of immediately turning to pharmaceutical drugs—as the U.S. medical-pharma industry typically does—Leiah Jerger, Jaelah’s mother, and her husband wanted to find out more about this drug and consider alternatives. CBD oil, a cannabis extract, is well-known to stop seizures in their tracks and allow children suffering from multiple seizures a day to become virtually seizure-free.

CBD, the other major ingredient in cannabis alongside THC, does not produce a high and can be extracted from industrial hemp plants. Due to its amazing healing power, especially for childhood seizures, CBD extract has been legalized in most states—even staunchly prohibitionist holdouts.

In April of this year, Indiana legalized the use of CBD oil for those with treatment-resistant epilepsy. After speaking with other parents successfully using CBD, Jaelah’s parents decided they would try it for their own daughter. Why risk the harmful side-effects of Keppra if there is a safer, effective option?

Apparently, at least one “expert” at Riley hospital believes this is such an offense that government must ruin the lives of children and parents who want to end their child’s suffering.

“Lelah Jerger, the child’s mother, said personnel at Riley Hospital for Children reported her to Indiana’s Child Protective Services after she and her husband decided to use cannabidiol oil, or CBD, to treat their daughter Jaelah, rather than use the medication prescribed by a Riley doctor.”

Even though the parents had a prescription for medical CBD from a chiropractic neurologist, and even though Jaelah “went from at least 40 noticeable seizures per day down to almost none,”Riley medical personnel reported the parents for “not treating” their daughter.

Unless you conform to the U.S. medical establishment—driven by Big Pharma and blinded by the drug war—you are in danger of losing the most precious thing in your life. Jaelah was virtually healed of her seizures through a completely legal process, but doctors and the State were somehow compelled to treat these parents as criminals.

“CPS arrived at the Jergers house in Huntingburg on Sept. 20, formally asking the parents to agree to keep Jaelah on Keppra, to take her for weekly blood tests to confirm she was taking Keppra and to only see a specified physician, Lelah said.

Just days before CPS arrived, the Jergers said they had already decided to add Keppra to their CBD oil treatment after consulting with another neurologist.

Jerger said CPS said it would get a court order to remove Jaelah from their home if they did not comply.

CPS contacted that family again on Sept. 26, Jerger said, telling the family to admit the girl to a specific hospital for symptoms from the Keppra medication.”

Rep. Mark Messmer was not going to let this injustice happen. He called the office of Gov. Eric Holcomb the director of the Department of Child Services (DCS). Soon after, DCS dropped the case.

“They had overreacted based on a complaint from the nurse practitioner in this case and should have approached it more cautiously than they did,” Messmer said. “I saw it as extremely heavy handed and over reach on the part of DCS.”

Incredibly, Gov. Holcomb believes that his agency acted appropriately by threatening to steal a child from caring parents for the act of healing their own child through legal means. In his mind, “ensuring the child’s safety” means ripping her from her family and taking away the cure for her seizures.

“Our daughter was never taken away from us, but the fear was horrible to live with,” said Jerger. “I would look outside my window just scared to death I would see a police officer and CPS here to take my kid.“

And she is not taking this lying down.

“Jerger wants CPS to be held accountable for what she sees as wrongdoing by the agency. She has started Facebook pages called “Justice for Lelah” and “Parents for DCS Reform” to bring attention to the situation.

“Our hope in this whole mess is that no other family will ever have to go through this,” she posted on the page. “If a product is legal and works, then something needs to be done to prevent CPS or hospitals from reporting it.”

The actions of Rep. Messmer and other noble lawmakers, such as Rep. Allen Peake of Georgia who skirts the law to bring medical cannabis to sick kids, suggest the tide has turned. With awareness, communication and civil disobedience, resistance to prohibition is growing.