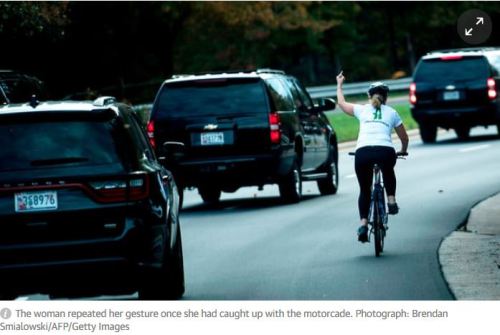 On Saturday, Oct. 28, 2017, President Trump was in a motorcade leaving the National Golf Club on the banks of the Potomac river, on the outskirts of Washington DC.

At 3:12 pm, the motorcade passed two female pedestrians, one of whom gave a thumbs-down sign. Then the motorcade passed a female cyclist in a white top and cycling helmet, who gave the President her middle finger. The motorcade slowed down and the cyclist caught up, still giving the finger, before turning off in a different direction. (The Guardian)

A White House photographer traveling in the motorcade took this picture of the cyclist, which went viral almost immediately.

As recounted by HuffPo, Nov. 6, 2017, late-night talk show hosts told jokes about the cyclist and people on social media began hailing the unidentified woman as a “she-ro,” using the hashtag #Her2020.

The woman’s name is Juli Briskman, a 50-year-old mother of two and a Democrat.

Briskman told HuffPo it was a gut reaction to flip President Trump off: “He was passing by and my blood just started to boil. I’m thinking, DACA recipients are getting kicked out. He pulled ads for open enrollment in Obamacare. Only one-third of Puerto Rico has power. I’m thinking, he’s at the damn golf course again. I flipped off the motorcade a number of time.”

Briskman is so proud of giving a sitting President of the United States the F-you finger gesture, she posted the pic as her profile pic on her Facebook page.

Since April 2017, Briskman had been working as a marketing specialist for Akima, LLC, a federal government contractor. Headquartered in Herndon, Virginia, Akima describes itself as “a holding company that supports a diverse portfolio of Federal and Commercial service providers.”

As her “finger” photo circulated online, Briskman decided to tell her employer’s HR department when she returned to work on Monday.

On Tuesday, her bosses called her into a meeting and fired her because she had violated the company’s social media policy by using the photo as her profile picture on Twitter and Facebook. Briskman said:

“They said, ‘We’re separating from you.’ Basically, you cannot have ‘lewd’ or ‘obscene’ things in your social media. So they were calling flipping him off ‘obscene.’”

Briskman said she emphasized to the executives that she wasn’t on the job when the incident happened and that her social media pages don’t mention her employer. They told her that because Akima is a government contractor, the photo could hurt their business.

Virginia is an employment-at-will state, which means employers can fire people anytime and for any reason. But Briskman said Akima LLC is being unfair because a male colleague kept his job after recently calling someone “a fucking Libtard asshole” on his Facebook page that featured Akima LLC as his cover photo. He was allowed to delete the post and keep his job.

Briskman bristles: “How is that any less ‘obscene’ than me flipping off the president? How is that fair?”