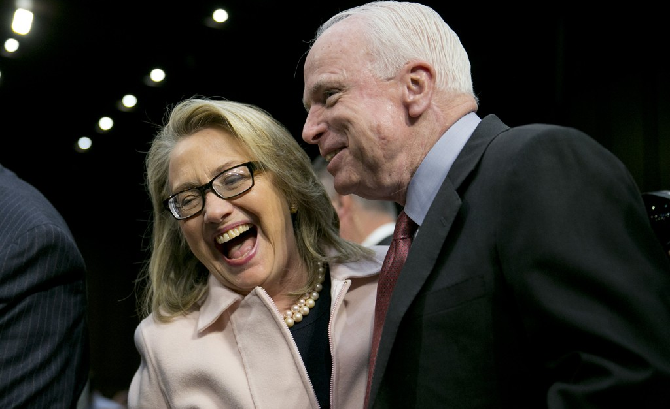 There is a buzz in the Alternative Media that the orthopedic boots worn by Hillary Clinton and John McCain may actually be ankle bracelets, worn to prevent them from fleeing the United States.

Remember Hillary Clinton saying she broke her big toe while “running down stairs wearing heels and falling backward” and so had to discontinue her book tour in the UK?

Here she is, in her last public appearance in the UK, wearing a special boot during an appearance on the BBC’s “Graham Norton Show” on Oct. 15, 2017.

When I posted about her broken toe, FOTM‘s Dave, who recently had much experience with toe and foot medical issues, remarked that “Broken toes do not require boots like that.”

It turns out that the real reason why Hillary discontinued her book tour, broken toe or not, is because she got wind that news would break the next day about Uranium One — that the Obama administration’s FBI and DOJ had known, as early as 2009, about a multi-million $ bribe that the Russian government “routed” to the Clinton Foundation while Hillary was Secretary of State, prior to the State Department’s approval of a controversial deal in 2010 giving Moscow control of 20% of American uranium.

Coincidentally, RINO warmonger Sen. John McCain — whose foundation, the McCain Institute for International Leadership, is funded by the Saudis (remember this!), Rothschilds and George Soros — recently also acquired an orthopedic boot on his right foot, just like Hillary.

“Senator McCain was treated at Walter Reed Medical Center over the weekend for a minor tear in his right Achilles tendon, as well as for other normal and non-life-threatening side effects of cancer therapy. Senator McCain has returned to work in the Senate and will be wearing a walking boot until his injured tendon is fully healed.”