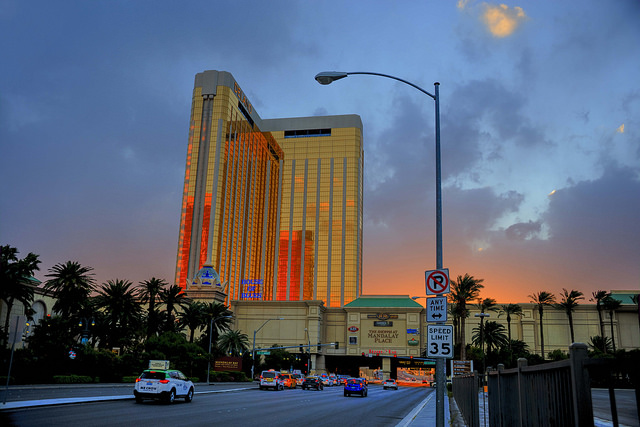 LAS VEGAS (INTELLIHUB) — A man by the name of “Jake” says he had a birdseye view of the massacre from the 64th-floor of the Delano Hotel where he was staying on the night of October 1 and says that he heard gunshots downstairs.

Jake told ABC News the night of the massacre, that he and a few of his friends thought it would be a “good idea” to run up to the Skyfall Lounge, “a bar that overlooks the strip,” where they would have a better view of what was going on after they heard a volley of fully-automatic gunfire ring out closeby.

According to Jake, when he and his friends reached the Skyfall Lounge they noticed that people in the bar were still unaware of what was happening at the concert venue where Jake and his friends noticed the carnage was taking place.

“My friends and I personally saw crowds of people running out of the festival and bodies hitting the ground and we watched these people being gunned down from the shooter on the 32nd-floor of the Mandalay Bay,” he explained.

Jake told ABC News that he and his friends were aware of the “active shooter situation” after they had heard gunshots downstairs which were secondary to the gunshots they had heard coming from Mandalay Bay.

“At that point, we actually went downstairs to the lobby to see if we could find out more and when the elevator doors to the lobby opened the air just wreaked of gunpowder and crowds of people were running to the elevators trying to escape,” he explained. “I guess, at that moment, there was also shooting going on inside the Mandalay Bay.”

That is when Jake decided to go live on Periscope. He had a little over 10,000 viewers on the live-stream, all of which were eager for information as the situation was still developing.

After live-streaming on Periscope, Jake reentered the lobby of the Delano Hotel where he discovered it had been ‘cleared out’ entirely.