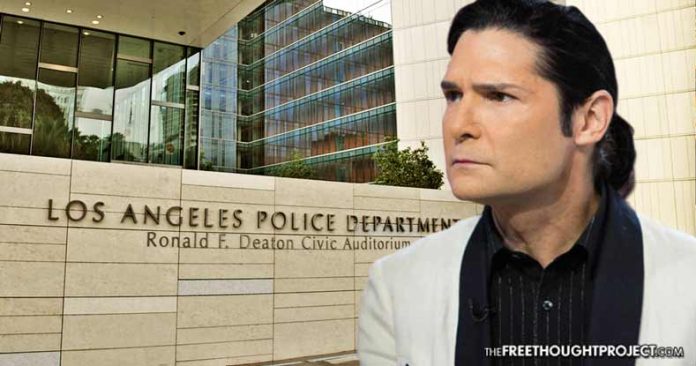 For years, Feldman has attempted to get these names out into the public and last week he went onto the Oz Show and contacted the authorities in Los Angeles. During the show, LAPD said they would get back with Feldman to take his complaint. Now, this week, it was reported that Feldman actually met with the LAPD and told them everything he knows.

As the NY Daily News reports, the 46-year-old actor, who has promised to out a “pedophilia ring” in Hollywood, said Monday that he “completed a formal sit down interview” with LAPD and “gave them all the info I know.”

Now, it is up to the LAPD to act on this information and seek out the justice.

In his book, as TFTP previously noted, Feldman described what Grissom did to him in graphic detail. He used a pseudonym at the behest of his attorneys to describe everything Grissom did.

“We had to change the names legally,” Feldman said. “The lawyers made me change the names. … They gave me a list of three or four, you know, names. I picked the one that sounded closest to his name.”

Feldman said “Ron Crimson” was the name he chose for Grissom in the book. In the book, Feldman detailed the horrifying abuse he endured at the hands of Grissom.

According to IMDB, Grissom appeared in the 1980s movies “License to Drive” and “Dream a Little Dream,” which both starred Feldman. And, in March, Feldman somewhat alluded to the fact that Grissom was one of his abusers.

hmmm can't confirm or deny, but that sure sounds familiar….

Grissom has a MySpace page that shows photos of him with Corey Feldman. Corey Haim is also featured in photos on his page. On the Dr. Oz Show, Feldman said these pictures are to brag about the abuse. “This guy, on his MySpace page and his Facebook page, has pictures of me and Corey Haim. He still taunts it and flaunts it.”

Indeed, on Grissom’s Facebook page, which has since been taken down, he openly shared images of Feldman as well.

According to Online records, Grissom has a criminal history of performing lewd or lascivious acts with a child. He was arrested in 2001 and served time in 2003.

As Heavy reported last week, Grissom was also arrested in Utah for an unknown crime in 1995. That arrest record gives his place of birth as Alaska. In 2000, Grissom spent three months in prison in Arizona for credit card theft, unlawful means of transportation and resisting arrest.

As TFTP reported last week, after Feldman went on the Today’s Show and mentioned the teen club he hung out at, we found Alphy’s Soda Pop Club, which was—as Feldman noted—promoted in teen magazines and catered only to underage child actors in Hollywood. It was owned by Alphy Hoffman.

In Feldman’s biography, Feldman says, “Ralph Kaufman’s club was a private social space for famous teens.” Kaufman is allegedly Hoffman and Feldman said this about him in his book as well:

Last week, Feldman put out the following message to his abusers:

“Now is your time,” Feldman said Thursday. “Be a man for the first time and come forward yourself. … Let it be known and you will be dealt with in a much more tolerant way, I’m sure. However, if you do not, we are coming for you.”

Now, it is a waiting game to see what happens. Rest assured that TFTP will be reporting on it every step of the way.