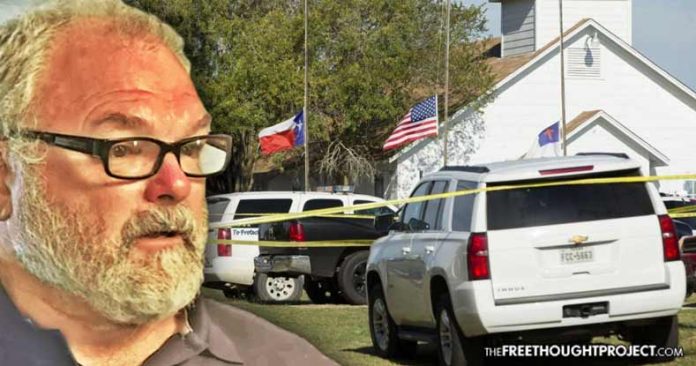 Sutherland Springs, TX – Law enforcement investigators have revealed the Texas church massacre occurred amongst a backdrop of “domestic violence” involving the gunman and his in-laws.

“This was not racially motivated, it wasn’t over religious beliefs,” Freeman Martin of the Texas Department of Public Safety said at a news briefing. “There was a domestic situation going on within the family and the in-laws.”

Two men, Stephen Willeford and Johnnie Langendorff are being hailed as heroes amid the tragedy.

The man hailed as a hero for confronting the Texas mass shooter during his rampage is a sharpshooting plumber with no military background — who hit the gunman through a gap in his body armor, according to a report.

Stephen Willeford managed to shoot Devin Kelley before jumping in another man’s truck and chasing him down, the Daily Mail reported…

Texas Department of Public Safety chief Freeman Martin said Willeford “grabbed his rifle and engaged the suspect” after Kelley left the First Baptist Church in Sutherland Springs, where he opened fire with an assault rifle and killed 26 people.

An area resident told the paper that Willeford, an avid biker who attends another church, learned about the shooting when his daughter called to say a man clad in body armor was shooting worshipers.

The local said that although Willeford has no military background, he didn’t hesitate when he came face to face with the suspect — and managed to squeeze off a round that struck the gunman, who had dropped his Ruger AR-15 variant.

On that fateful Sunday morning, the two men were strangers but came together to try and stop an act of heinous evil that likely saved countless lives.

On Monday night, the two men were reunited and hailed for their heroic actions that helped stop the deadliest mass shooting in Texas history.

The two men hugged one another at a vigil for the 26 murdered and nearly two dozen wounded during the attack on Sutherland Springs First Baptist Church.

Willeford, a former NRA instructor who lives near the church, courageously grabbed his own rifle and ran out of his home barefoot after his daughter alerted him to the attack in an effort to stop the gunman.

Willeford was in the midst of exchanging gunfire with Kelley as he attempted to escape in his SUV, when Johnnie Langendorff came across the scene on the way to his girlfriends. Willeford promptly hailed Langendorff and explained the situation.

“I said, ‘that guy just shot up the Baptist church. We need to stop him,” Willeford told the affiliate.

Langendorff immediately gave chase for 11 miles – with speeds during the pursuit reaching 95 mph.

“I had to make sure he was caught,” Langendorff told CNN. “It was, ‘Do everything necessary to make sure that this guy is stopped.’”

“I was on the phone with dispatch the entire time,” he said. “I gave them the direction we were going, on what road and everything, and that the vehicle was in sight and that I was getting closer and closer to him.”

The killer’s vehicle abruptly veered off the roadway and crashed into a ditch about 11 miles north of the church. Langerdorff then pulled his own truck within 25 yards of the suspect’s vehicle.

“The gentleman that was with me got out, rested his rifle on my hood and kept it aimed at him, telling him to get out get out. There was no movement, there was none of that. I just know his brake lights were going on and off, so he might have been unconscious from the crash or something like that, I’m not sure,” he said.

Langendorff said he had no regrets about throwing himself into such a dangerous situation.

“Because that’s what you do, you chase a bad guy,” he told CNN.

Willeford said he only wished he could have gotten to the church faster, to confront Kelley with his own weapon and stop the massacre.

And while Willeford doesn’t consider himself a hero, the Wilson County Sheriff disagrees.

“What do you say to the man who stepped up when he heard the gunshots? I’d say he’s a hero,” Wilson County Sheriff Joe Tackitt Jr. said. “I don’t think there’s any question about that. Had he not done what he did, we could have lost more people.”

Luckily, for all the other innocent lives potentially saved by Willeford, Texas laws allow citizens to own guns.

On Monday, Willeford spoke to 40/29 News to give a more detailed account of the events:

I didn’t have any time, because I kept hearing the shots, one after another, at a time, very rapid shots, just pop, pop, pop. And I knew every one of those shots represented someone, that it was aimed at someone, that they just weren’t random shots, more than likely. I grabbed a handful of ammunition and started loading my magazine.

And I’m trying to survey the situation, not knowing what’s going on; and then I saw a man in a black tactical helmet with a dark-shaded helmet on, and obviously looked to me like it was a bulletproof vest. He had a pistol in his hand, and we exchanged gunfire.

And I was standing behind a pickup truck for cover, and we exchanged fire. He saw me, and I saw him, I’m like, it was surreal to me; it couldn’t be happening. I couldn’t believe it. I know I hit him. He got into his vehicle, and he fired another couple rounds through his side window. When the window dropped, I fired another round at him again.

We chased him down 539, and when we first started chasing him he was out of sight. And the man driving the truck, I found out later his name is Johnny; he was driving at a high rate of speed. We were trying to pass cars to catch up. We called 911 and we were talking to 911.

I’m no hero; I am not. I think my God, my Lord, protected me and gave me the skills to do what needed to be done. And I just wish I could have got there faster.