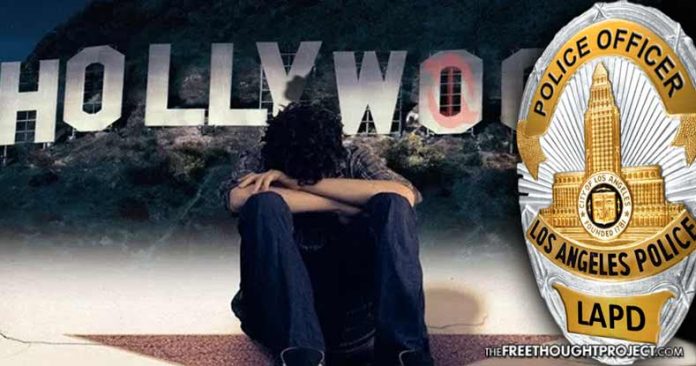 Hollywood, CA — For decades, child actors and Hollywood insiders alike have been all but screaming from rooftops about the alleged pedophile ring that is Tinseltown. However, no significant official inquiry into these claims appears to have ever taken place—until now. The Los Angeles Police Department has just officially confirmed that they are now investigating the alleged pedophile ring in Hollywood.

As the Free Thought Project reported last year, childhood star turned adult actor Elijah Wood came forward and claimed Hollywood is in the midst of a massive sexual abuse scandal, which can be compared to that of Jimmy Savile in Britain.

In an interview with the Sunday Times, Wood dropped a bombshell, noting how child actors were regularly “preyed upon” by industry figures.

What Wood is talking about is the rampant sexual abuse of child actors, which is finally getting mainstream coverage thanks to Corey Feldman and all those who refuse to allow this obvious problem to be swept under the rug.

Now, after decades of seemingly ignoring these problems, the LAPD is forced to act after Feldman bravely sat down with them on Monday and told them everything.

‘IMPORTANT CAMPAIGN UPD8: I JUST COMPLETED A FORMAL SIT DOWN INTERVIEW W @LAPDHQ SPECIAL DIVISION, & GAVE THEM ALL THE INFO I KNOW! THIS WAS OFFICIALLY THE 1ST FORMAL REPORT EVER TAKEN ON ANY OF MY CASES, AS SBPD NEVER FOLLOWED UP BACK IN 1993, & HAS NO RECORD OF MY COMPLAINTS,’ wrote an animated Feldman on Twitter.

OFFICIALLY THE 1ST FORMAL REPORT EVER TAKEN ON ANY OF MY CASES, AS SBPD NEVER FOLLOWED UP BACK IN 1993, & HAS NO RECORD OF MY COMPLAINTS.

He then added: ‘THE LAPD WILL BEGIN AN OFFICIAL INVESTIGATION NOW! THINGS R HEATING UP, IM PRAYING 4 SAFETY!’

On Tuesday, the LAPD confirmed to the Daily Mail that “Corey Feldman filed a report with the Los Angeles Police Department. There is no further information at this time, and his report is being investigated.”

Then, on Wednesday, the Hollywood reported confirmed again that the LAPD is indeed investigating these allegations.

“Los Angeles police have opened an investigation into the claims from Corey Feldman that a pedophile ring has been victimizing young actors for years in Hollywood,” LAPD detective Ross Nemeroff confirmed to The Hollywood Reporter.

“When a report is filed on something as severe as this, an investigation is opened by the robbery/homicide division (which also handles sex crimes),” Nemeroff added.

The idea of an LAPD investigation into a massive decades-old pedophilia ring among Hollywood insiders is certainly a promising bit of news. That being said, however, these alleged predators go to great lengths to cover up their crimes and the LAPD may find themselves hitting brick walls real soon.

While two Feldman’s abusers—whom he has already publicly exposed—are small-time losers, some of these accused predators have resources all the way up to the White House and beyond.

As TFTP reported Tuesday, Harvey Weinstein, a personal friend of Bill Clinton, was exposed hiring Israeli intelligence agencies, made up of former members of Mossad, to silence those who would dare expose him—including his alleged victims and the journalists with whom they talk.

Jon Robberson is a 16 year veteran of Hollywood feature film, television, and commercial production. He worked behind the scenes at all of the major studios and networks, having worked on projects for such notables as Spielberg, Bruckheimer, Silver and Abrams, to name a few. He also left that scene because he says the upper echelons of it are rife with pedophilia.

“There is pedophilia running rampant in Hollywood,” Robberson said. He then noted, just like Wood, that this ring preys on young children and it is made up of the “highest upper echelons of Hollywood, executive VPs of development, producers, mega-power agents and the international bankers that fund all this stuff.”