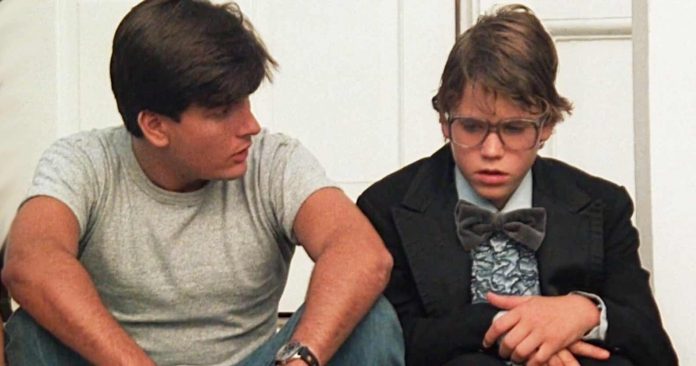 Following weeks of disturbing revelations of rape and pedophilia in the entertainment industry, Charlie Sheen has been accused of child molestation on the set of the 1986 film “Lucas.” According to former actor Dominick Brascia, Sheen who was 19 at the time, had sex on multiple occasions with now deceased Corey Haim, who was only 13.

In an interview with the Enquirer, Brascia said that the late Corey Haim confided in her about his encounters with Sheen.

The Enquirer also reported that this account has been confirmed by over a dozen other sources within the industry, and it has been mentioned that there could be many other victims. One of the anonymous sources told reporters that “Corey was so confused by the sexual encounter he believed, like so many victims, he was ‘in love’ with his abuser,” adding that Sheen bullied young Haim into a vulnerable position for sex.

At least two other actors who were underage on the set of “Lucas” have come forward with allegations that Sheen made sexual advances towards them as well. This new information sheds light on clues that were dropped by Corey Feldman in his 2013 memoir “Coreyography,” where he mentioned that an unnamed adult male sodomized Haim on the set of “Lucas.”

“At some point during the filming he explained an adult male convinced him it was perfectly normal for older men and younger boys in the business to have sexual relations, that it was ‘what all guys do.’ So they walked off to a secluded area between two trailers during a lunch break for the cast and crew, and Haim, innocent and ambitious as he was, allowed himself to be sodomized,” Feldman wrote.

When asked about Sheen in a 2011 interview Feldman said, “I’m not a huge fan of Charlie Sheen…especially the way he’s affected other people that I know.”

Feldman also said that Haim “fought for his entire life to recover from those early experiences and to get his life together.” According to many close to Haim, his early encounters with Sheen sent him on a lifelong downward spiral of depression and drug addiction which ultimately resulted in his young death.

This is not the first time that Sheen has been suspected of pedophilia, back in 2006 Sheen’s ex-wife Denise Richards claimed that she found child pornography on his computer, and she ultimately prevented him from having their daughters overnight.

Richards filed court documents during their divorce claiming that Sheen “belonged to disturbing sites which promoted very young girls, who looked underage to me with pigtails, braces and no pubic hair performing oral sex with each other.”

Additionally, when Feldman was on the Today Show last week, he predicted this very report.

“They cover it up. They protect it. I know of a friend of mine that actually went and spoke to a reporter and gave all the information and they were — the day before I launched my campaign, they were supposed to put out a story in the [National] Enquirer,” said Feldman.

“I believe there’s a lot of darkness in Hollywood right now, and I believe it’s been there for quite some time,” said Feldman. “It’s going to continue unraveling. This is just the beginning, it’s just the tip of the iceberg.”

By the afternoon, Sheen released a statement through his representatives to the Hollywood Reporter saying, “Charlie Sheen categorically denies these allegations.” If Brascia is lying, Sheen could easily sue for defamation, time will tell.

It is also important to mention that this is just one set of one movie and there are various sources claiming that Sheen exhibited this type of behavior. It is highly possible that other victims will be empowered to speak out by these revelations, realizing that they are not alone, as we saw in the cases of Kevin Spacey and Harvey Weinstein, which exploded to dozens of reported victims after the first person came forward.