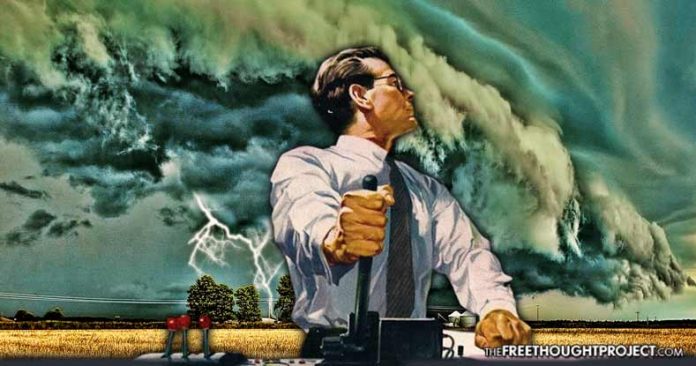 Washington, D.C. – Geoengineering is finally going mainstream as the U.S. House Subcommittee on Environment and Subcommittee on Energy Hearing, on Wednesday, held the first House hearing about the science that until now has generally been considered a “conspiracy theory” and relegated to the fringe’s of society by the Praetorian Guard mainstream media — controlled by the ruling power-elite oligarchy.

The controversial subject of climate engineering or weather modification – which was popularized, and oversimplified with the term “chem-trails” – is stepping from the shadows and into the light of public scrutiny for the first time.

The congressional hearing, titled “Geoengineering: Innovation, Research, and Technology,” was attended by members of the House committees as well as representatives of think tanks, academics, and researcher scientists to discuss the future of geoengineering research.

Interestingly, “Chemtrails” have long been the talk of conspiracy theories with massive amounts of disinformation being posted all over the internet including fake studies and photos. However, several real studies show that some ‘seeding’ or geoengineering may have already taken place – indicating that secret projects to test the science have likely already taken place.

A study published in the International Journal of Environmental Research and Public Health suggests that geoengineering has already begun and that at least one substance being used is a toxic by-product of coal burning called coal-fly ash.

“The widespread, intentional and increasingly frequent chemical emplacement in the troposphere has gone unidentified and unremarked in the scientific literature for years. The author presents evidence that toxic coal combustion fly ash is the most likely aerosolized particulate sprayed by tanker-jets for geoengineering, weather-modification and climate-modification purposes and describes some of the multifold consequences on public health.”

The hearings largely operated as a coming out party for the field, and as an opportunity for the industry to attempt to solicit funding from the Trump administration to advance basic research.

A 2013 report by the Congressional Research Service, titled Geoengineering: Governance and Technology Policy provided a brief overview of the “geoengineering” technology:

In general, geoengineering technologies are categorized as either a carbon dioxide removal (CDR) method or a solar radiation management (SRM) (or albedo-modification) method. CDR methods address the warming effects of greenhouse gases by removing carbon dioxide (CO2) from the atmosphere. CDR methods include ocean fertilization, and carbon capture and sequestration. SRM methods address climate change by increasing the reflectivity of the Earth’s atmosphere or surface. Aerosol injection and space-based reflectors are examples of SRM methods. SRM methods do not remove greenhouse gases from the atmosphere, but can be deployed faster with relatively immediate global cooling results compared to CDR methods.

During Wednesday’s hearing, the potential need to set up a regulatory structure within which experiments would be allowed, at a set scale, was discussed.

California congressman Jerry McNerney said he plans to soon introduce legislation to direct the Energy Department and other federal agencies to support two National Academy of Sciences reports on geoengineering. One would develop a research agenda for solar reflection methods; the other would provide guidance for governance of resulting experiments.

According to a report by investigative journalist Derrick Broze, writing for Activist Post:

Previously, we reported on Director of the Central Intelligence Agency, John O. Brennan, addressing the topic of geoengineering while discussing instability and transnational threats to global security at a meeting with the Council on Foreign Relations in late June 2016.

During his long-winded talk of threats to US interests and how the largely CIA-created ISIL threat is impacting the world, Brennan brought up the topic of geoengineering.

Every expert to testify at Wednesday’s hearing noted that geoengineering techniques shouldn’t be substituted for efforts to reduce greenhouse gases and prepare for climate change impacts. Additionally, a letter, signed by 24 scientists and environmental advocates, stated that “any consideration of a Federally funded and coordinated research program into geoengineering must be in the context of a strategic portfolio of responses to climate change.”

According to The Sacramento Bee:

One idea gaining traction is to seed marine clouds with salt water or other particles, increasing their potential to reflect solar rays, cooling the earth. Its part of nascent and controversial branch of science known as “sunlight reflection methods,” or SRM.

“We think SRN could buy time for other (carbon-reduction) measures to be put in place,” said Philip J. Rasch, chief climate scientist for the Pacific Northwest National Laboratory in Richland, Washington.

“If the worst case scenarios of global warming come to pass, these technologies could be used to help people, saving lives and economies from the worst effects of climate change,” added Joseph Majkut, director of climate policy at the Niskanen Center, a Washington D.C. think tank.

Rasch and Majkut are two climate specialists who testified Wednesday before the House Committee on Science, Space and Technology, which held a subcommittee hearing on the potential for “geoengineering” — a catchall for proposals to directly cool the atmosphere or pull carbon emissions from it.

Geoengineering, which includes SRM, has been discussed by scientists since the 1960s, but with mixed enthusiasm, said Rasch. Some experts fear that seeding clouds could have unintended effects, such as impacts on rainfall.

Scientists at the University of Washington formed the Marine Cloud Brightening Project, in an effort to bolster financial support for basic research, in hopes of running small-scale tests of adding particles to clouds.

In addition to seeding marine clouds, the team is also looking into what’s known as “stratospheric aerosol geoengineering,” which involves injecting reflective particles into the upper atmosphere, similar to a volcano during major eruptions, to produce a regional cooling effect.

During Wednesday’s House hearing Committee Chairman Smith noted that geoengineering “could have positive effects on the Earth’s atmosphere,” but cautioned “we have a lot to learn.”

Although Smith intimated that geoengineering could be preferable to increased regulation, stating, “While we are not sure this is plausible, some scientists believe it could achieve substantial environmental benefits at a cheaper cost than regulations,” he acknowledged the potential for “unintended consequences of geoengineering.”

Smith highlighted the fact that numerous studies have shown a “butterfly effect” whereby altering the climate in one region of the world can have disastrous effects elsewhere on the globe.

“One concern is that brightening clouds could alter rain patterns, making it rain more in some places or less in others,” Smith stated. “We still do not know enough about this subject to thoroughly understand the pros and cons of these types of technologies.”

Kelly Wanser, director of the Marine Cloud Brightening Project, encouraged “governance and regulatory efforts,” and emphasized that oversight should be “rapidly established.”

Joseph Majkut, Director of Climate Policy at The Niskanen Center, said during the hearing that “Congress has already given limited authority to regulate experiments intent on altering the weather, including changing planetary albedo,” but noted, “at this point, those regulations are limited to reporting requirements.”

Majkut called for Congress to implement “significant civil and administrative penalties” and “consider criminal liability” for violating the regulations, and raised the specter of an international governance regime related to geoengineering.

“Congress might also consider whether to extend that criminal liability not only to such experiments originating within or over the United States, but also conducted outside of our borders that result in an impact on the United States,” Majkut stated. “Such considerations would need the input of the diplomatic and international community.”

The Niskanen Center is described as a libertarian think-tank aimed at influencing “Washington insiders,” as opposed to the public. The Center takes on issues like the environment and works to influence political leaders. In a recent blog titled “RIGHTLY GOVERNING SOLAR GEOENGINEERING RESEARCH,” Majkut and colleagues wrote about need for “small-scale field tests” and “a domestic regulatory governance structure for research.” Further, The Niskanen Center wrote that national governance structures might serve “as a test-bed for governance ideas” which could “seed discussions on international deployment” of geoengineering over the coming two decades.

The hearing’s emphasis on the need for domestic and international governance structures illustrates the uncertainty around how exactly geoengineering will affect neighboring nations and communities. The Carnegie Climate Geoengineering Governance Initiative recently released a statement in support of “well-governed research on geoengineering” and urged governments and other institutions to support the University of Calgary’s recent publication of a Code of Conduct for Responsible Geoengineering Research.

“Geoengineering is a matter for all society, worldwide, as it affects us all,” Carnegie wrote. “This means we need to hear many more voices than currently being heard in the geoengineering debate.”

There is no longer debate that geoengineering is real and that it can involve the injecting or spraying of materials into the atmosphere. While this technology has been slowly developed and deployed in the dark, it is clearly being allowed to be brought into the light of the mainstream now to condition the public for the technology’s operationalization.

It seems the public is largely being left out of the discussion.

Will the public speak up and force their voices to be heard, or will they be bullied into silence by being labeled a conspiracy theorist at the slightest mention of geoengineering?

Please share this story in hopes of waking people up to the fact that geoengineering is not a conspiracy theory, but a scientific reality we should all be fully aware of, and educated about!