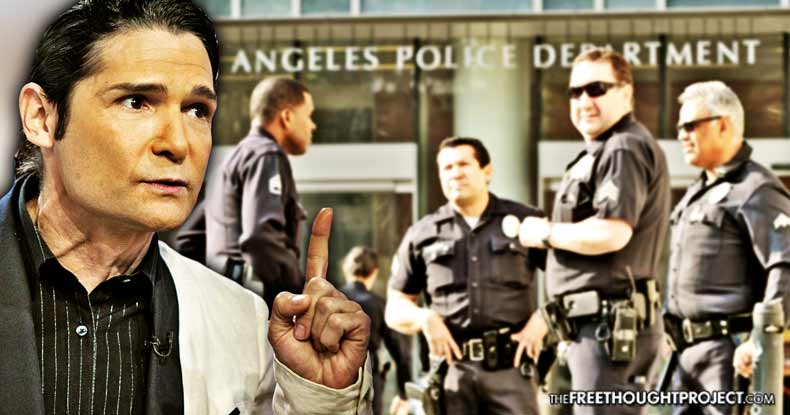 As Corey Feldman predicted on the Today show over a week ago, the Los Angeles Police Department has quickly closed the investigation into the pedophile ring that allegedly operates in Hollywood.

LAPD officials told Page Six on Thursday that they would not be launching a full-scale investigation into the allegations because the statute of limitations has passed.

“The alleged accordance is out of statue and Robbery/Homicide have no avenues to pursue the case. However, the LAPD applauds Mr. Feldman for coming forward, as an out of statute assault report could potentially bolster any current and forthcoming case as it creates a pattern of behavior. The latest rash of sexual assault reports are particularly troubling and the LAPD encourages and will gladly take a report from anyone who feels they may be a victim,” an LAPD spokesperson said in a statement.

It took the department just a few days to decide that they were not interested in pursuing the case, despite the fact that new sex crimes have been popping up in Hollywood on a daily basis after producer Harvey Weinstein was outed in October.

Feldman responded to the news of the investigation getting shut down on Twitter, saying, “MAYBE NOW U WILL #BELIEVE ME WHEN I SAY I NEED 2 DO IT MY WAY: LAPD Not Investigating Corey Feldman’s Abuse Claims.”

MAYBE NOW U WILL #BELIEVE ME WHEN I SAY I NEED 2 DO IT MY WAY: LAPD Not Investigating Corey Feldman's Abuse Claims https://t.co/XmdD0M2MBH

Many critics and skeptics of Feldman’s claims have suggested that he is just doing this for money or publicity and that he should have gone to the police to make a formal complaint. However, the quick disregard that this case was given by the LAPD shows that the laws in California are set up in such a way as to make investigating older claims of abuse nearly impossible.

Prosecution for “normal” sexual assault has a statute of limitations of six years in the state of California. According to Feldman, he told the Santa Barbara police within this time period. However, according to Feldman, the police turned off the recorder when he named his abusers and never looked any further as they were more concerned with hammering Michael Jackson.

Even if Feldman’s abuse is not covered within the statute of limitations, the abusers are still out there, they are still mentally deranged and some of them are still in positions of power where they can prey on children. Any normal person would be under constant surveillance and have their lives run through a fine tooth comb if these types of allegations were leveled against them—but Feldman’s abusers, along with the likes of Weinstein, Kevin Spacey, and others, seem to be getting a pass from local law enforcement.

Feldman has been extremely open about his traumatizing experiences in the entertainment industry throughout his career, and in recent weeks he has been taking things a step further by naming his abusers. As we reported last week, Feldman revealed during an interview with Dr. Oz that one of his abusers was former co-star John Grissom. Grissom is also a convicted child molester from other unrelated cases, lending more evidence to the fact that he could still be a very dangerous man.

On the same day that the LAPD decided to drop the case, it was also reported that Feldman’s “Goonies” co-star Sean Astin corroborated his story of Hollywood pedophile rings. Astin told Page Six at TBS’s “Search Party” premiere that, “Hopefully, this doesn’t play out as a personal tabloid story. The fact is, real people all over the country are starting to have a conversation, and it can be very distracting if it distills down into some kind of typical [story]. My only concern is [it] won’t actually develop into the complex conversation that needs to happen. And if it doesn’t, and it becomes about quickly pointing fingers and making accusations and the obvious stuff, I think it will be a missed opportunity.”