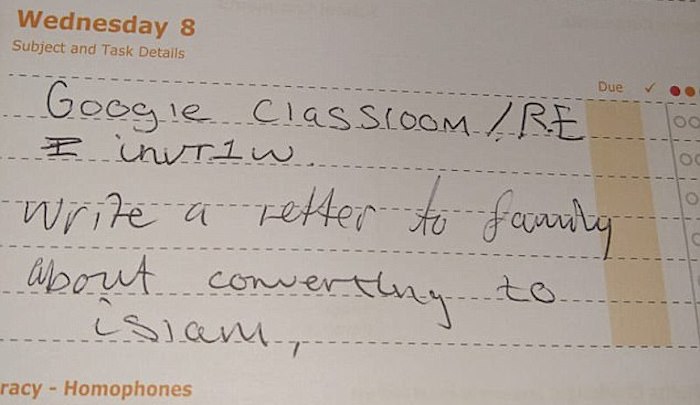 The dhimmi vanguard preparing the rest of the population to be docile and accept their new overlords.

Imagine the outcry if students, including Muslim students, had been assigned to write about converting to Christianity. But no one will be particularly upset about this — that would be “Islamophobic.”

“‘Write letter to family about converting to Islam’: Furious stepfather refuses to let his stepdaughter, 12, complete her homework after she is asked to pen them a note about becoming a Muslim,” by Abe Hawken, Mailonline, November 9, 2017:

A furious stepfather has refused to let his 12-year-old stepdaughter finish her homework after she was asked to write a letter to her family about becoming a Muslim.

Mark McLachlan, 43, from Houghton-le-Spring, near Sunderland, has slammed the decision by the Kepier School to ask pupils to pen the note.

He has refused to let his stepdaughter, who he has asked not to be named, complete the task after failing to see what the letter would accomplish.

Mr McLachlan said: ‘I know as part of the national curriculum they have to learn about all religions.

‘If they want children to learn about Islam, then go teach them all about it and its history.

‘What I don’t want is a school asking my stepdaughter to look into reasons for converting to another religion.

‘Like every parent, it is our decision on how we raise them and once they are old enough to make decisions, then it is there choice.’

Mr McLachlan visited the school to raise his concerns and was told that this was part of the curriculum and was shown example exam questions for Islam, Christianity and Hinduism.

The homework came to light when Mr McLachlan was looking through the youngster’s school planner and saw the teacher has written the task to be handed in on November 8.

He added: ‘When I saw this assignment in the planner, written by the teacher, you could have knocked me over with a feather.

‘I told her she will not be completing it and she is more worried about getting detention.

‘We send our kids to school to get a good education and use what they have learnt to have a good career.

‘I have no problem with them learning about religions but I feel they should not be asking 12-year-olds writing to their parents about why they are converting.

‘I would like to emphasise how much respect I have for the head of year and deputy head who were very receptive to my complaint and concerns but unfortunately in this instance the national curriculum has failed miserably in my opinion.’…