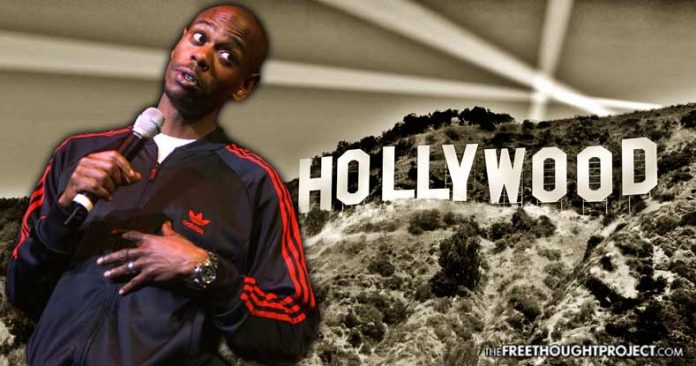 In February of 2006, social commentary and comedy genius Dave Chappelle was asked on to the show, Inside the Actors Studio—the one on one sit down interview show with James Lipton. During the show, Dave Chappelle noted that he was going to “drop some dimes” on the secrets of Hollywood and he held no punches.

Chappelle has been the subject of conspiracy theories for well over a decade. After his comedic genius propelled him to the forefront of the mainstream in 2003 with his record-breaking hit show, The Chappelle Show, all of the sudden Chappelle noted, things got a little weird for him.

“I’m a conspiracy theorist to a degree,” Chappelle famously said on Oprah when he alleged there was a Hollywood conspiracy to put black male actors in dresses. Indeed, nearly every black man who is a major star has been on the silver screen in a dress.

Now, as the curtain slowly gets pulled back on the depravity that is Hollywood, this 2006 interview helps shed some much-needed light on what is likely going on.

In just the past few weeks, men, women, and child victims have begun to come forward after the Harvey Weinstein scandal broke, unleashing a torrent of accusations. The accusations led to naming names and the naming names led to actual police investigations into the depraved underworld of Hollywood.

Let there be no mistake, the decades of alleged abuse that have been silenced in the mainstream media have finally been given the coverage they deserve and the cockroaches are scattering like crazy. While there is still a very long uphill battle to be fought, these small chips into the armor that is the media establishment’s dark secret are having an effect.

However, for so long, that has not been the case.

In 1996, actor and comedian Martin Lawrence, with a gun in his pocket, ran into traffic on a busy street, cursing and screaming until police arrived and threw him in the hospital.

During this incident, according to witnesses, Lawrence was yelling, “Fight the establishment!” and “They are trying to kill me!”

This was reported on in the media as a psychotic episode caused by “complete exhaustion and dehydration.”

However, during the interview with Lipton a decade later, the personal friend of Lawrence, Dave Chappelle, chose to rebut this assertion by the media.

“When we did Blue Streak, and we were promoting it, Martin had a stroke,” recalled Chappelle. “He almost died. And then after that, I saw him, and I was like, ‘oh my god Martin, are you okay?’ And he said, ‘I got the best sleep I ever got in my life.’”

“That’s how tough he is,” Chappelle said as he set up his bombshell.

“So let me ask you this: what is happening in Hollywood that a guy that tough would be on a street waving a gun, screaming they are trying to kill me?”

“Yeah,” Lipton replies, before Chappelle begins to expose the darkness that is Hollywood.

“What’s going on? Why is Dave Chappelle going to Africa? Why does Mariah Carey make a $100-million deal and take her clothes off on TRL? A weak person cannot get to sit here and talk to you. Ain’t no weak people talking to you. So what is happening in Hollywood? Nobody knows. The worst thing to call somebody is crazy. It’s dismissive. I don’t understand this person, so they’re crazy. That’s bullshit. These people are not crazy. They’re strong people. Maybe the environment is a little sick.”

Clearly understanding what he was talking about, the fans in the audience erupted into applause.

Fast forward 11 years and here we are again. Corey Feldman, Rose McGowan, Gweneth Paltrow, Heather Graham, and dozens of others have added their names to a growing list of victims who’ve suffered at the hands of Hollywood predators. Are all these people lying or is what Dave Chappelle said 11 years ago true.

Maybe, just maybe these people — who work with the government to propagandize the citizens into accepting wars and violence as the norm by selling them fictional heroes in fairy tales on the silver screen—maybe they are a little demented.

Maybe this industry that praises violence and rapes men, women, and children—while hiring ex-Mossad agents to cover it up—maybe they are a little corrupt. As Chappelle said, “Maybe the environment is a little sick.”