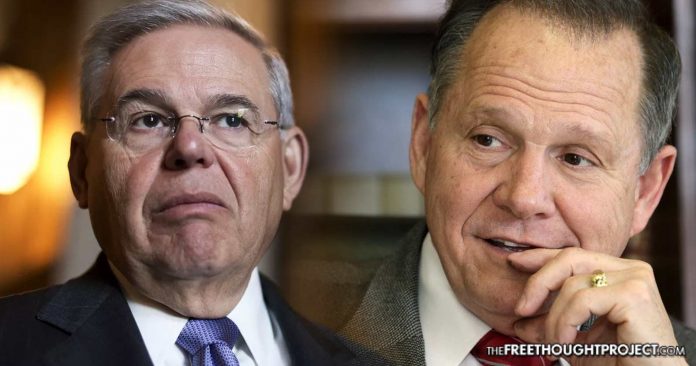 Washington, D.C. — Never has the mainstream media bias been more evident than in the last 48 hours, as all three major broadcast networks have given heavy coverage to the allegations made against Alabama GOP Senate candidate Roy Moore, while the ongoing federal corruption trial of New Jersey Democratic Senator Bob Menendez—who was accused of hiring child prostitutes—has been largely ignored by these same outlets.

Menendez, who has been on trial for 65 days, is charged with taking tens of thousands of dollars in bribes in exchange for political favors. He faces a total of six counts of bribery, three counts of honest services fraud, one count of conspiracy, one count of interstate travel to carry out bribery and one count of making false statements on his congressional financial disclosures to conceal the crimes.

Despite being on trial for over two months, “ABC World News Tonight, CBS Evening News and NBC Nightly News haven’t even mentioned the trial once. NBC’s Today also hasn’t covered this trial at all, while ABC’s Good Morning America and CBS This Morning have managed to give it one story each (1 minute, 48 seconds for ABC and 22 seconds for CBS),” according to the Media Research Center (MRC).

In fact, in the past 24 hours, the same networks that never once in 65 days mentioned Menendez, and the serious accusations against him – including the allegation of hiring child prostitutes, “spent 24 minutes and 36 seconds on serious allegations against Alabama Senate candidate Roy Moore.”

According to a report by the Media Research Center:

To put things into perspective, this is the first time a sitting U.S. Senator has faced a corruption trial since 1981.

Additionally, if Menendez is convicted and forced out of office prior to Jan. 16, 2018, GOP Governor Chris Christie will appoint a replacement—likely flipping a Democratic Senate seat to a Republican one.

The jury has been deliberating Menendez’s fate since Oct. 30.

These facts, along with the salacious details uncovered during the course of the investigation into Menendez, would seemingly be exactly the type of story political pundits in the media salivate over—yet there has largely been silence from the mass media presstitutes.

While the media has a duty to cover the sexual harassment allegations against Alabama Senatorial Candidate Roy Moore, the fact that these same outlets have chosen to give such extremely disparate coverage to Menendez’s trial reeks of liberal media bias.

Regardless of whether a Democrat or a Republican, the media has a duty to share their investigations with the public.

The selective outrage of the mainstream media is unmistakable in the case of these two men and clearly evidenced by the disproportionate coverage given to their alleged indiscretions.

It is inexcusable that these two men, both alleged to have engaged in inappropriate activity with underage parties, are not treated in the same manner by the mainstream media—which speaks volumes as to how the mass media attempts to propagandize Americans into a false sense of reality.

Please share this story to help others clearly see how the media attempts to mold perceptions as to benefit those that largely share their political ideology!