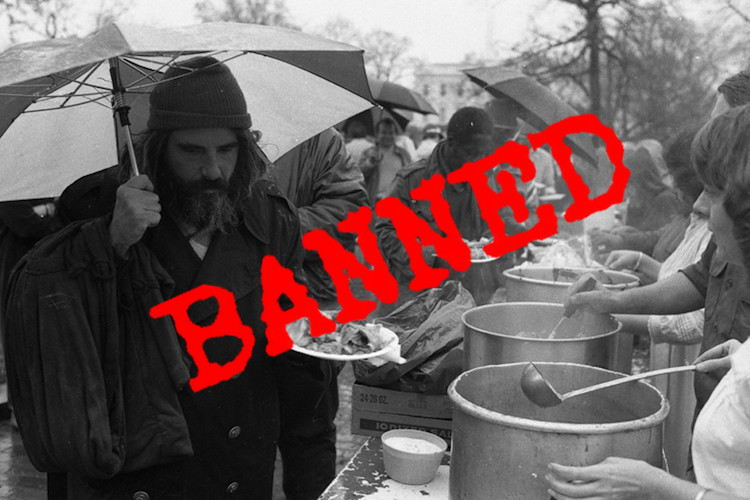 It’s tough to say when our societal values shifted so dramatically, but for some reason now, government at large has decided that charity for the homeless is a crime. In a society with such stunning abundance, efforts to feed the homeless are being met with legal challenges and even police action in America. This is a disturbing trend which has been gaining steam in recent years.

In the latest publicized event, authorities in California have demanded that the United Methodist Church in Malibu, CA stop its meager yet hope-giving program of offering hot meals to the city’s homeless. The church has been giving away only 100 meals a week, on Wednesdays, since 2014, which is a relatively small humanitarian contribution in a wave of homelessness which has descended on the West Coast since the housing crisis of 2008 and now spurred on by the excesses of the regions tech industry.

“It’s a safe place,” said Michah Johnson, who is homeless. “And everyone is welcome. And the food is really good. It’s home-cooked. And there’s TLC involved.”

“The church is very helpful,” he added. “They keep my spirits up. They keep me accountable. When you’re homeless, it’s very easy to slip off and become jaded.” [Source]

This is nothing new, as we have seen for the last few years authorities have been cracking down on efforts by citizens around the nation who attempt to help the homeless by providing food for them. Without the help of churches, citizens and other devoted organizations, our homeless neighbors are left to scavenger for sustenance, as noted by a member of Malibu United Methodist Church.

“I think many of them eat out of dumpsters and trash cans when they aren’t eating with us,” said Kay Gabbard, who also works with the United Methodist Church. “We can’t pretend like (homelessness) doesn’t exist in our backyard. We can’t pretend that it only exists outside Malibu.” [Source]

When contacted by CBS Los Angeles for coomment on this issue, the Mayor’s office in Malibu did not respond with a comment, and as of now there is no clear reason why this policy is to go into effect. Never-the-less, given the track record in cases like these, cities claim that feeding homeless people puts others in danger and causes a public nuisance, which is a wholesale denial of the depth of the homeless problem.

In 2014 it was reported that some 33 U.S. cities had enacted restrictions or outright bans on feeding the homeless, and this has only continued to increase in subsequent years. Charity workers in Florida and other cities have even been arrested for efforts to support the homeless in their communities. And a major crackdown on feeding homeless earlier this year in San Francisco made headlines.

This article (Happy Holidays – California City Demands Church Stop Feeding the Homeless) was originally created and published by Waking Times and is published here under a Creative Commons license with attribution to Vic Bishop and WakingTimes.com. It may be re-posted freely with proper attribution, author bio, and this copyright statement. Please contact [email protected] for more info.