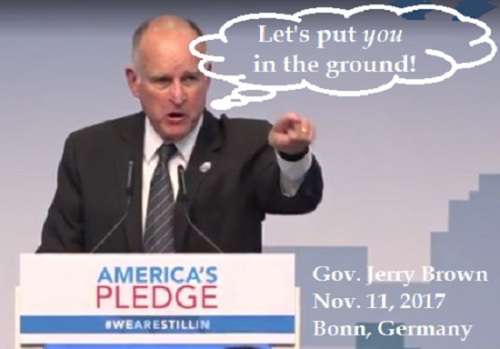 California governor Jerry Brown is in the midst of a 10-day tour in Europe to propagandize about anthropogenic (man-made) “climate change,” which will end with the United Nations conference on climate change.

Several days ago, at an event organized by the Vatican’s Pontifical Academy of Sciences, Brown bemoaned about humans’ “greed” and “inertia” and urged that a “transformation” is needed in our consciousness — that what is needed is mass “brain washing”. (See DCG’s post here.)

Yesterday, Brown was in Bonn, Germany, at the U.S. Climate Action Pavilion on behalf of “America’s Pledge,” which brings together leaders from both the private and public sectors to ensure the U.S. remains dedicated to the climate goals of the Paris Agreement that President Trump had nixed because the agreement would undermine the U.S. economy.

Mandy Mayfield reports for the Washington Examiner that what appears to be a handful of protesters disrupted Brown’s speech by yelling and chanting about fighting pollution and keeping oil in the ground.

“I wish we could have no pollution, but we have to have our automobiles. I agree with you, in the ground. Let’s put you in the ground so we can get on with the show here.“

Imagine what the MSM would do if President Trump had called for putting protesters “in the ground”.

Nor do I believe Jerry Brown was joking.

If the Left had their druthers, they would have all dissidents exterminated.

Do you remember that commercial for the 10:10 Campaign — a worldwide campaign to reduce carbon emissions by at least 10% by 2010? In the commercial, school children and adults who refuse to join 10:10 are blown up into bits, their blood and pieces of flesh spattering those nearby.