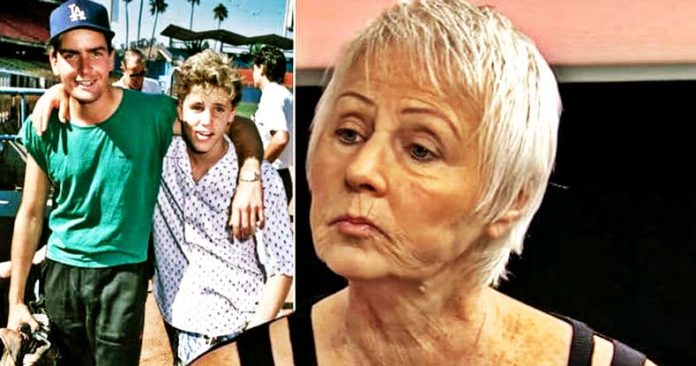 Last week we reported that former actor Dominick Brascia accused Charlie Sheen of molesting the late actor Corey Haim—but now Haim’s mother has come forward to say that her son was sexually abused by Brascia, and she saw it happen.

Judy Haim, Corey’s mother, appeared on the Dr. Oz show after the allegations hit the news to clear the air and tell her side of the story, and she dropped a bombshell.

“This guy Dominick is the guy that abused my son. My son said so. He said so on ‘The Two Coreys.’ If you ever go back and watch any interview that my son ever gave, you would understand what I’m talking about. He hid nothing,” Judy said.

Judy said she even saved her son from being “pinned down” by Brascia on one occasion after she received a phone call from him yelling and screaming that Brascia wouldn’t get off of him.

When she got there Judy said that “Dominick was sitting on my son, pinning him to the floor, not allowing him to move. I took a pool cue — and he will remember that — and I went so close to his head and I said: ‘You better get off of him or I’m bashing your head in.’ And he got off of him and we left.’ “

She added that if she had a chance to do it all over again, she would not have allowed her son to pursue a career in acting.

“He would have been in school, in Toronto, with his friends, playing hockey like he loved,” she said. “[It’s] not a good idea to put these young kids in these movies in Hollywood. Do it in the summertime, let them go to school, don’t go to Hollywood….The industry or the media, they always go and tend to blame a parent. You know what? You can watch them as much as you can watch them. But what are you going to do, go out with a 16- or 17-year-old to every single party, to every single movie? It’s the same thing on set. What if a producer wants to read lines in the trailer? … It’s a really tough situation. What are you going to do? My son went in with a whole bunch of boys to play pool, and one day, this is what happened to him.”

Judy Haim then said that she hopes that Brascia will admit what he did to her son.

Rumors have circulated about Brascia being Haim’s abuser in the past, but he has consistently denied the allegations.

“It’s totally not true. I’m as shocked as anyone else [as Haim] was one of my good friends, I knew him for over 25 years,” Brascia said in an interview last year with Perez Hilton.

It is highly possible that Brascia fabricated the story about Sheen in order to take attention away from his own guilt in the situation.

However, last week’s story did expose that Charlie Sheen’s ex-wife told a court she found child pornography on his computer. Despite this testimony from Haim’s mother, he is probably still a person who should not be left alone with children. It is also important to mention that Judy Haim has given contradictory stories to the media in recent weeks, first saying that her son was not abused at all, and then walking her statement back to claim that Brascia was the real predator.

All of these accounts should be taken with a grain of salt, but in order to get closer to the truth, everyone involved should be questioned about these incidents and have their responses compared with one another. Since the police are not going after the predators in Hollywood, it has become the job of the alternative media to sift through these clues and disseminate them to the pubic for further review.

Tomorrow, Corey Haim's mom, Judy, talks allegations that her son was sexually assaulted by Charlie Sheen & points the finger at someone else pic.twitter.com/ZfcXkXLaWB