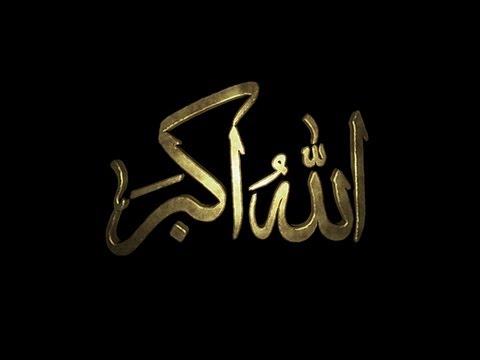 Allahu Akbar. You hear it everywhere these days.

Special agent Scott Wickland said that he heard cries of “Allahu Akbar” before the Benghazi attack. And then the guards ran for their guns.

“Allahu Akbar” has been present at virtually every major recent Islamic terror attack in the West.

But according to the New York Times, “Allahu Akbar” is an “innocent” and “innocuous” expression. According to one of the Times’ sources, “You see a reallу beautiful woman” and “уou go, ‘Allahu Akbar.’”

If all those shouts of “Allahu Akbar” in Paris, London and New York are caused by Muslim terrorists encountering attractive women, their reaction of choice to an attractive woman is a killing spree.

“Allahu Akbar” is not “innocent” or “innocuous.” It’s at the core of what makes Islam violent.

To understand the violent history of “Allahu Akbar”, let’s climb into a time machine and go back to the year 628 and to a place that will one day be known as Saudi Arabia. It’s hot out here in the desert. Temperatures from the spring to the fall routinely cross the hundred degree mark and keep going.

We’re in Khaybar. It’s a desert oasis maintained by the Jews. If being in 109 degree heat has got you down, you stop by the oasis, and have a cool drink of water and some dates. Then you keep going. Out here trade runs through the desert and the oasis is a gas station. If you want to choke off major trade routes, you go after an oasis. And that’s what a cult leader whose followers today terrorize the world by attacking its travel routes, airline hijackings, pirates preying on ships, train and bus bombs, was doing.

Muslims call what happened next, the “Battle of Khaybar”. Like most Muslim battles, it was a treacherous ambush and a massacre. And it helps explain why there are no Jews in Saudi Arabia today. Nor do Muslims regret this act of ethnic cleansing. Instead they celebrate it. Muslims still threaten Jews by chanting, “Khaybar, Khaybar ya Yahud.” “Remember Khaybar, Jews, Mohammed’s Army Will Return.”

That’s what Mohammed shouted as he realized that his surprise attack had been successful. “Allahu-Akbar! Khaybar is destroyed.” He boasted that any nation attacked by Muslims would suffer a similar fate. And then he “had their warriors killed, their offspring and woman taken as captives”. Mohammed also picked up his own sex slave. “Safiya was amongst the captives. She first came in the share of Dahya Alkali but later on she belonged to the Prophet.” Safiya’s husband had been murdered. Like their ISIS successors, the Prophet of Islam’s band of killers and rapists took the women as slaves.

That’s where “Allahu Akbar” originated. And that’s why Muslims still shout it at terrorist attacks.

Allahu Akbar does not mean “God is Great.” It means “Allah is Greater”. What was Allah greater than at Khaybar? Allah was greater than the religion of the Jews because Mohammed was able to defeat them.

In Islam, a religious war is also a religious test. Muslim victories demonstrate the supremacy of Allah.

Despite the incessant claims that Muslims, Jews and Christians all worship the same god, the Koran tells Muslims something very different. “And the Jews say: Ezra is the son of Allah, and the Christians say: The Messiah is the son of Allah. These are the words of their mouths; they imitate the saying of those who disbelieved before; may Allah destroy them; how they are turned away!” (Koran 9:30)

The preceding verse commands Muslims to “Fight those who do not believe in Allah” and “who do not consider unlawful what Allah and His Messenger have made unlawful and who do not adopt the religion of truth from those who were given the Scripture until they pay jizya and submit.”

Those who “were given the Scripture” are Christians and Jews.

Jews and Christians had “taken Rabbis and monks to be their lords besides Allah”. The Christians had taken “Messiah, the son of Mary” when they had been commanded to “worship only one Allah.” (Koran 9:31)

“Allahu Akbar” originated with Mohammed’s attack on the Jews of Khaybar. When Muslim terrorists shout it today, they are declaring that they are about to prove Allah’s superiority by killing non-Muslims.

Muslims kill non-Muslims to prove that, “Allahu Akbar”: that Allah is greater the religions of their victims.

“Allahu Akbar” is the motive for Islamic terrorism.

A typical excuse is that Muslims will use “Allahu Akbar” to celebrate a good event. What this excuse misses though is that Islam is a supremacist religion. And Muslims believe that the good event that they are celebrating is due to being the only ones who truly worship “Allah”. That’s a common religious belief. And they are entitled to it. But the problem is that this relationship rests heavily on Jihad.

The Islamic mission is to make Islam supreme over all other religions (Koran 9:33). If Muslims aren’t striving to defeat other religions, then “Allahu Akbar” rings hollow. Islam does not primarily offer an internal religious experience that transforms the believer, but an external collective experience that transforms the world. Jihad, the acts of terror we see on the news, are that religious experience.

“Allahu Akbar” is the supremacist core of Islam. Mohammed offered a religious experience that merged desert banditry and conquest, whose sacraments were the murder of the enemies of Islam and the rapes of their wives and daughters. The horrifying Islamic rituals of ethnic cleansing, rape and torture demonstrated that, “Allahu Akbar”. That Allah was greater than the dead men and raped women.

The Yazidi girls who were sold as sex slaves to ISIS fighters, as the Prophet Mohammed had done, describe their Islamic captors intimidating them by shouting, “Allahu Akbar”, and recall the Islamic rapist of a 12-year-old girl saying that it brought him “closer to Allah”, of a 15-year-old girl calling it a “prayer to Allah” and of the rapist of another 12-year-old girl describing her abuse as “pleasing to Allah.”

“I write this while the letters drip of pride. Yes, O religions of kufr (non-Muslims) altogether, we have indeed raided and captured the kāfirah women, and drove them like sheep by the edge of the sword. I and those with me at home prostrated to Allah in gratitude on the day the first slave-girl entered our home.”

How can raping children be a prayer to Allah? Because, “Allahu Akbar”. Being able to rape non-Muslim girls is a matter of “pride”. It shows that Allah, the god Muslims worship, is superior to their religion.

When ISIS Jihadists rape children or when an ISIS Muslim sympathizer runs over people in New York, Berlin or Nice, it’s a prayer of praise to Allah. And the prayer is, “Allahu Akbar.”

The more non-Muslims are killed, abused and enslaved, the more the truth of Islam and the supremacy of Allah are proven with the screams of the wounded, the dying and the families of the dead.

“Allahu Akbar” is a mandate to kill non-Muslims. A Muslim terrorist taking a gun, a knife or a truck and attacking non-Muslims is living out, “Allahu Akbar”. He’s showing that Islam is superior.

“Allahu Akbar” isn’t something he happens to say while killing you. It’s why he’s killing you.