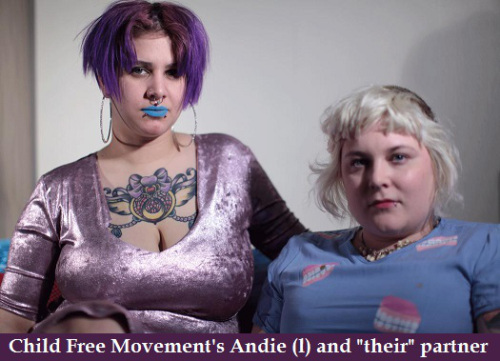 Millennials, aka Generation Y, are those born from the early 1980s to the mid-1990s or early 2000s. The U.S. Census Bureau uses the dates 1982-2000, which would mean Millennials are 17 to 35 years old. Often the children of the Baby Boomers, Millennials are sometimes referred to as “Echo Boomers” due to a major surge in birth rates in the 1980s and 1990s.

Already possessed of some woeful attributes as a group (see examples below), increasing numbers of Millennials are so determined against having kids, they are getting sterilized in their 20s.

Louise Donovan for Vice, March 2, 2017, that the “child free movement” is the subject of a new BBC Three documentary, Young and Sterile: My Choice, exploring why a growing number of teenagers and 20-somethings in the UK and the U.S. are getting sterilized, not just out of fear of becoming accidentally pregnant or a father.

Among those interviewed in the documentary is a 28-year-old woman named Andie, who chooses not to identify as a specific gender, but uses the pronoun “they”.

Andie was sterilized last year and says it’s the best decision “they’ve” ever made:

“It’s massively improved my mental health and [body] dysphoria. No one ever stops people from having children so why would you stop someone who doesn’t want children?

“My mother was a really violent person and I was excommunicated from her at a young age. I’m scared of having kids and turning into her, because motherhood was quite a cruel thing for me. I wouldn’t want my kids to go through the same experience.”

Andie says the stigma around simply not wanting children is huge but it seems to be worse for women, who are viewed as heartless and selfish:

“People judge you. I’ve been back to hospital, unrelated to my procedure, and female doctors have lectured me on something I’ve already had done. This idea that women have to settle down, get married, have children—it’s quite a moral thing, isn’t it? Life isn’t just about reproduction. For me it goes back to this patriarchal idea that gender is binary and, within that, you have to comply with set or ‘normal’ roles. I’m very much against that.”

Andie doesn’t totally rule out being a parent, allowing the possibility of adopting or co-parenting: “There are other ways to have children that don’t involve pushing them out through your uterus.”

Another woman interviewed in the BBC documentary is 19-year-old Katelin, who is originally from Philadelphia. Katelin is absolutely certain she doesn’t want children, so sure that she’s considering sterilization — a permanent procedure that involves blocking a woman’s fallopian tubes, which prevents the woman’s eggs from reaching and being penetrated by sperm. Katelin has mental health problems and a serious heart defect she doesn’t want to pass on, although she also enjoys her “vagina exactly the way it is”.

“I honestly don’t like kids—they’re germ-y and annoying and gross. I’m old enough to vote, play the lottery, drive, and go to jail—why can’t I decide I don’t want kids? I just don’t have a motherly bone in my body.”

Today, one in five British women will never have kids, up from one in ten in the 1970s. And although the number of vasectomies has decreased nearly two-thirds in the last decade, men are also vocal about their child-free choice, like 29-year-old Paul Pritchard, whose vasectomy was filmed live during the making of the documentary.