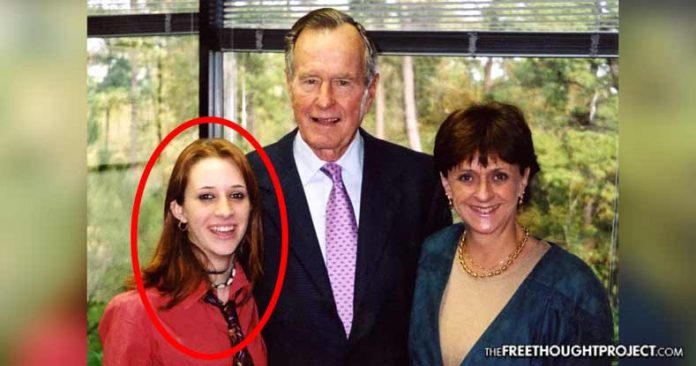 Slowly but surely as the curtain gets peeled back on the Hollywood predators, the light is beginning to turn on the political elite as well. The 41st president of the United States is the latest alleged predator to be outed by a former victim.

Roslyn Corrigan has come forward recently to explain how she was only 16-years-old when she got the chance to meet George H.W. Bush. However, this dream come true to meet a former president quickly turned into a nightmare for the young girl.

In an interview with Time magazine, Corrigan noted that then 79-year-old Bush Sr. groped her buttocks at a November 2003 event in The Woodlands, Texas, office of the Central Intelligence Agency where Corrigan’s father gathered with fellow intelligence officers and family members to meet Bush, Corrigan said.

“My initial action was absolute horror. I was really, really confused,” Corrigan told TIME, speaking publicly for the first time about the encounter. “The first thing I did was look at my mom and, while he was still standing there, I didn’t say anything. What does a teenager say to the ex-president of the United States? Like, ‘Hey dude, you shouldn’t have touched me like that?’”

Corrigan explained that the incident happened as she stood next to Bush for a photo opportunity. While this case could easily be written off by some as an attempt to grab the limelight or make false accusations for attention, it is the sixth such case to emerge since October 24. One such incident was witnessed by Barbara Bush and the former president went on to apologize for it.

In the apology, Bush noted that the butt grabbing was done in a “good-natured manner.”

At age 93, President Bush has been confined to a wheelchair for roughly five years, so his arm falls on the lower waist of people with whom he takes pictures. To try to put people at ease, the president routinely tells the same joke — and on occasion, he has patted women’s rears in what he intended to be a good-natured manner. Some have seen it as innocent; others clearly view it as inappropriate. To anyone he has offended, President Bush apologizes most sincerely.

It is also important to note that Corrigan says she has not been silent on this issue and told plenty of people about her abuse. However, she says most people just dismissed her claims which is why she never went public until now—after more people have also come forward.

“I don’t know, maybe it never really hit people that I was a child at the time and that goes beyond a guy being inappropriate in the workplace to a peer or somebody in his age range,” she said. “I was a child.”

In the interview, Corrigan explained how it happened.

“As soon as the picture was being snapped on the one-two-three he dropped his hands from my waist down to my buttocks and gave it a nice, ripe squeeze, which would account for the fact that in the photograph my mouth is hanging wide open,” Corrigan said. “I was like, ‘Oh my goodness, what just happened?’”

After Bush left, Corrigan immediately told her parents, however, they had no idea how to move forward.

“When he left, my daughter Rozi said, ‘He grabbed me on the rear end.’ And I said, ‘What, what?’” Sari said. “And she said, ‘Yes, he grabbed me when they were taking the picture. He grabbed me on my butt.’ And I was like, ‘Oh my god, are you kidding me?’

“But, you know, it’s the president. What are you supposed to do?” she said in an Oct. 28 interview. “And you’ve got your husband’s job that could be in jeopardy. I mean, you just didn’t then. You should—you should have always spoken up, always—but we didn’t.”

Indeed, because this incident happened in Texas—which has no statute of limitations on child sexual assault—these accusations should spawn an immediate investigation. However, the likelihood of such an investigation taking place is all but non-existent.

For those that think this is some anomaly, Bush is not alone in his propensity to creepily fondle children as they pose for a photo op. Below is a compilation former Vice President Joe Biden creepily fondling, smelling, and whispering to children.