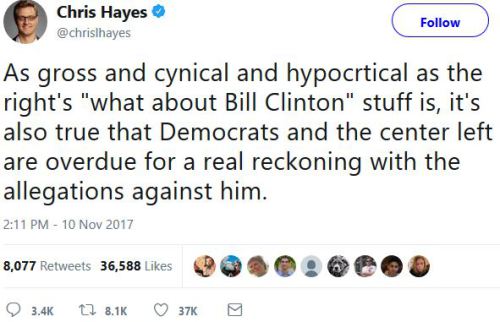 Something interesting is going on with the liberal MSM — they’re turning against the Clintons, specifically Bill Clinton.

At least three mainstays of MSM — MSNBC, The Atlantic and The New York Times — are calling Bill Clinton a rapist. Finally.

“As gross and cynical and hypocritical as the right’s ‘what about Bill Clinton’ stuff is, it’s also true that Democrats and the center left are overdue for a real reckoning with the allegations against him.”

“With a pencil neck and a sagging jacket he clambered gamely onto the stage after Hillary’s acceptance speech and played happily with the red balloons that fell from the ceiling.

When the couple repeatedly reminded the crowd of their new status as grandparents it was to suggest very different associations in voters’ minds. Hillary’s grandmotherhood was evoked to suggest the next phase in her lifelong work on behalf of women and children—in this case forging a bond with the millions of American grandmothers who are doing the hard work of raising the next generation, while their own adult children muddle through life. But Bill’s being a grandfather was intended to send a different message: Don’t worry about him anymore; he’s old now. He won’t get into those messes again.

Yet let us not forget the sex crimes of which the younger, stronger Bill Clinton was very credibly accused in the 1990s. Juanita Broaddrick reported that when she was a volunteer on one of his gubernatorial campaigns, she had arranged to meet him in a hotel coffee shop. At the last minute, he had changed the location to her room in the hotel, where she says he very violently raped her. She said that she fought against Clinton throughout a rape that left her bloodied. At a different Arkansas hotel, he caught sight of a minor state employee named Paula Jones, and, Jones said, he sent a couple of state troopers to invite her to his suite, where he exposed his penis to her and told her to kiss it. Kathleen Willey said that she met him in the Oval Office for personal and professional advice and that he groped her, rubbed his erect penis on her, and pushed her hand to his crotch.

It was a pattern of behavior; it included an alleged violent assault; the women involved had far more credible evidence than many of the most notorious accusations that have come to light in the past five weeks. But Clinton was not left to the swift and pitiless justice that today’s accused men have experienced. Rather, he was rescued by a surprising force: machine feminism. The movement had by then ossified into a partisan operation, and it was willing—eager—to let this friend of the sisterhood enjoy a little droit de seigneur.

The notorious 1998 New York Times op-ed by Gloria Steinem must surely stand as one of the most regretted public actions of her life. It slut-shamed, victim-blamed, and age-shamed; it urged compassion for and gratitude to the man the women accused. Moreover (never write an op-ed in a hurry; you’ll accidentally say what you really believe), it characterized contemporary feminism as a weaponized auxiliary of the Democratic Party. […]

The widespread liberal response to the sex-crime accusations against Bill Clinton found their natural consequence 20 years later in the behavior of Harvey Weinstein: Stay loudly and publicly and extravagantly on the side of signal leftist causes and you can do what you want in the privacy of your offices and hotel rooms. But the mood of the country has changed. We are in a time when old monuments are coming down and men are losing their careers over things they did to women a long time ago. […]

The Democratic Party needs to make its own reckoning of the way it protected Bill Clinton. The party needs to come to terms with the fact that it was so enraptured by their brilliant, Big Dog president and his stunning string of progressive accomplishments that it abandoned some of its central principles. The party was on the wrong side of history, and there are consequences for that. Yet expedience is not the only reason to make this public accounting. If it is possible for politics and moral behavior to coexist, then this grave wrong needs to be acknowledged. If Weinstein and Mark Halperin and Louis C. K. and all the rest can be held accountable, so can our former president and so can his party, which so many Americans so desperately need to rise again.”

Writing in today’s (November 14, 2017) print version of the New York Times, Op-Ed Columnist Michelle Goldberg is more mealy-mouthed and protective of Hillary Clinton than The Atlantic‘s Caitlyn Flanagan. That being said, Goldberg nevertheless admits that: