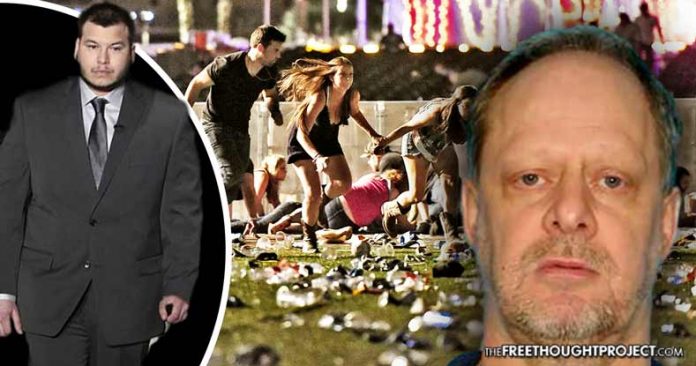 Las Vegas, NV – With the 24/7 news cycle constantly in full swing, important stories at times get lost in the constant onslaught of non-stop information. The mainstream media gatekeepers essentially dictate what social and cultural memes are injected into the public consciousness, what topics are discussed, and which cases are given publicity and thoroughly investigated with journalistic rigor.

With such oligarchical control of the mass media – the media gatekeepers of information decide what stories stay in the glare of the public spotlight, and which ones are allowed to fade from the headlines.

Without question, one would reasonably expect the most deadly mass shooting in recent American history, which took place in Las Vegas on October 1, 2017, to maintain a strong presence in the headlines — especially given the lack of answers surrounding the case.

The scant information released by investigators indicates that Stephen Paddock, 64, who by all accounts was independently wealthy and a Vegas high-roller, opened fire on a music festival from a 32nd-floor hotel room at the Mandalay Bay Casino.

The massacre left 58 dead and 546 injured, yet one and a half months later and there are still few answers – even to the most basic of questions.

Now, a month and a half later, there are few answers to the most deadly mass shooting in recent U.S. history – and perhaps even more strange – the case has been jettisoned from the 24/7 mainstream media cycle, despite the fact that the most basic of questions have yet to be answered.

One would assume that such a high-profile case would garner widespread interest from investigative teams across the spectrum of major broadcast mass media and cable news, and yet, there are no penetrating journalistic investigations delving into the many unanswered questions.

In fact, coverage and investigation into the highly dubious shooting are virtually non-existent outside of online alternative news media.

Here are the few facts that we know thus far, and they seem to raise more questions than answers:

2. Paddock wired $100,000 to an account located in the Philippines a week prior to the massacre.

3. Investigators claim Paddock’s laptop was missing its hard drive when they found it in his hotel room.

4. Paddock reportedly took cruises that made port stops in the Middle East.

5. Authorities now claim an officer discharged his weapon in Paddock’s hotel room – after denying it for the first month after the attack. (This raises the question of why police discharged a weapon if Paddock had already committed suicide prior to law enforcement breaching the room? And why they lied about it after the fact.)

6. Security guard Jesus Campos, who reportedly came across Paddock as he began his attack was allegedly shot in the leg, but a spokesperson for UMC Quick Care, the walk-in health clinic facility Campos supposedly went to after being shot, said they had “heard nothing” about Campos visiting them.

7. During an interview on Fox News with Tucker Carlson, an attorney for the victims revealed that not only did police officers respond to Campos after he was shot, they were right outside of Paddock’s door before he began shooting out of his hotel room window.

8. Eiland also noted that MGM Grand claims to have a “corporate watch center” that trains its employees to report any suspicious activity. So if a guest arrived at Mandalay Bay Hotel with 27 rifles and 5,000 rounds of ammunition stored in 10 bags, why didn’t the employees who helped him, or the cleaning service who visited his room regularly, report suspicious activity? And if they did, why wasn’t it addressed?

9. On Halloween, a suspect, identified as Sayfullo Habibullaevic Saipov, rented a pickup truck, drove it onto a busy bicycle path and mowed down innocent people. Almost immediately after the horrific attack that left 8 dead and a dozen more injured, video of Saipov, an Uzbekistan native, was released. There has yet to be a single image of Stephen Paddock released from the thousands of cameras inside and outside of the Mandalay Bay Casino.

10. Campos disappeared days after the shooting, reportedly leaving the country, thus, being a no-show to numerous scheduled television news interviews. Upon his return to the U.S., he did a softball, scripted, interview on the Ellen DeGeneres Show where no penetrating journalism, nor tough questions were asked. The interview was almost comical in the sense that DeGeneres did more narrating of the actual events than Campos, which allowed for him to not divulge any information.

So why did Jesus Campos leave the country in the middle of an investigation into the most-deadly mass shooting in recent American history? Why did he refuse to do the news interviews, and instead opt for a scripted daytime talk show?

The Mandalay Bay, and all of the Vegas Strip for that matter, are some of the most heavily survielled areas on the planet — yet we have seen no video footage, or even stills — of Paddock.

Additionally, as we previously reported, 4 survivors of the attack have died under somewhat questionable circumstances.

As a report from Zero Hedge notes:

Notably, both Kymberley Suchomel and Danny Contreras both publicly claimed there were multiple gunmen the night of the mass shooting. Dennis and Lorraine Carver died after their Mercedes smashed into a metal gate and exploded into flames.

The couple’s youngest daughter, 16-year-old Madison Carver, told the Las Vegas Review-Journal that she heard the crash from her bedroom. When she ran outside and down the street to find out what had happened, she recognized her family’s vehicle in flames.

By the time their daughter heard the crash (which only happened about a half mile from the Carver’s home) and ran down the road to see what had happened, the car was engulfed in flames… Much like everything else pertaining to the Vegas shooting, the story just doesn’t make sense.

There still has been no motive released for the massacre.

The complete silence from law enforcement in such a high-profile case raises serious questions about the potential for some type of cover-up taking place.

Why is there no investigative coverage of Vegas shooting by major media organizations? Why did the story simply vanish from the news cycle with so much public interest and so many unanswered questions?

The fact that there have been virtually no answers to any of the questions that have arisen from the official story not adding up, while simultaneously being blacked out by the mainstream mass media, seems to indicate an intentional soft-censoring of the Vegas mass shooting… the only question is why?

Over a month and a half later – and we know exactly as much as we did in the immediate aftermath of the attack… virtually nothing.

Contrast that to the recent attack in New York where a detailed picture of the suspect and his activities in the hours and days before the attack was public within hours.…

…yet in the case of Stephen Paddock, we still know nothing a month and a half later.

The official narrative does not add up in the Las Vegas attack, and the public needs to be sure to hold the lamestream media and those investigating the massacre accountable.

It’s clear that this story is being censored by legacy media in an effort to keep the American public in the dark about the exact details surrounding the most-deadly mass shooting in recent U.S. history.

Out of respect for the memory 58 dead and 546 injured — we need to ask why this investigation is being blacked-out and hidden from the public.

Do we really believe that after the most-deadly mass-shooting in America, and with few answers, everyone just decided they didn’t care about the who, what, where, why, and how of the attack?

Please share this important story to help increase public awareness regarding the numerous oddities surrounding the Vegas mass-shooting — and the ongoing media blackout!