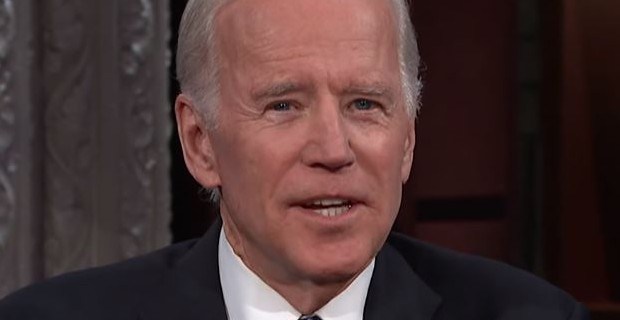 “He would mess with every single woman or teen. It was horrible”

An ex-Secret Service agent is claiming that former Vice President Joe Biden engaged in “Weinstein-level” sexual assault and that he would walk around the VP residence late at night completely naked.

According to Big League Politics’ Cassandra Fairbanks, a Secret Service agent who spoke on condition of anonymity revealed that Biden “would mess with every single woman or teen,” and that a Christmas get-together at the VP’s house had to be canceled “because Biden would grope all of our wives and girlfriend’s asses.”

He also said that the Service often had to protect female agents from him and that Biden was prone to parading around the VP residence late at night with no clothes on.

During one alleged incident in 2009, Biden cupped the breast of a Secret Service agent’s girlfriend during a photo, prompting the agent to shove Biden and almost hit him. The agent was subsequently suspended for a week, according to the source.

Men would often stand in front of female agents and Navy women or create false pretenses to have them leave the room just to get them away from Biden, according to the agent.

Best-selling author Ronald Kessler previously claimed in his book that Biden was fond of swimming naked and that female Secret Service agents found that “offensive”.

In a February 2015 article entitled What are we going to do about Creepy Uncle Joe Biden?, the Washington Post’s Alexandra Petri highlighted a number of incidents where Biden made women feel uncomfortable by getting close and touching them.

There are innumerable videos online that show Biden touching children and whispering into their ears. A thread tweeted by Richard Armande Mills on Monday highlights an alarming number of these incidents.

In this clip, former Vice President Biden uses a candid moment to fondle the chest area of a little girl — in front of her entire family. Her visible discomfort is extremely obvious. pic.twitter.com/PXZx68KEGe

If that wasn't disturbing enough, in this clip, Biden not only touches a young woman but smells her hair, kisses her, whispering something into her ear, only to tell her "see you back home, I hope" after visibly creeping out her and who I assume is her mother. pic.twitter.com/WrFLWmAPFJ

As former VP, Biden had a habit of smelling the hair of women and (particularly) little girls. In this clip, he fixes the hair of a little girl, conveniently placing his hands near her chest area. Her and the other young girl beside her clearly seem uncomfortable by it all. pic.twitter.com/fpER7WB604

In this clip, Biden swears-in (R) Senator Jim Risch. During photographs, Biden touches Risch's daughter, specifically asking to take a photo alone with her. You can hear Risch say "Dad's going to stand pretty close." (I wonder why?) Biden even jokes and says, "If I was young…" pic.twitter.com/LLqJ4guU0q

In this clip at another swearing-in ceremony, former VP Biden starts strangely sniffing the hair of a very young girl (he just met) repeatedly, also kissing on her. This man clearly has no boundaries. pic.twitter.com/MxYxEJVDRR

Biden almost always seems to immediately inquire about the age of the girls he meets during these ops. He also has a habit of creepily saying "no serious guys till you're 31." "Serious" guys? The way he handles young girls is discomforting to watch. You can see it on their faces. pic.twitter.com/AH0V41WiQG

In this clip, Biden grabs onto a little girl he just met, continuing to grab her with one hand as he uses his other to shake hands with those he's being introduced to. Very awkward. He then starts stroking her face repeatedly. pic.twitter.com/NhHkuthDb6

A lot of the family members involved in these awkward moments don't know how to respond to Joe Biden preying on their young female relatives. Jeff Sessions, however, knows exactly what to do. Watch as he swats Biden's hand from touching his granddaughter. Wonder why he'd do that? pic.twitter.com/YNw5ZHlXWP

Former VP Joe Biden has a quote he tells practically every girl he met during those taped confirmation hearings.

In this clip, he asks a little girl if she remembers what he told her the last time they interacted together. What do you think he said? pic.twitter.com/tykYacaI85

Is it a joke? A rule. A requirement. A demand?

Why shouldn't a young women be able to date until she's well-past maturity?

Former VP Biden has said it so much, a montage exists. pic.twitter.com/SdWqn8mSIa

The footage from former Senator Kelly Ayotte's swearing-in was one of the most awkward encounters. I've broken it into 2 parts. In this clip, Ayotte's daughter Billy impatiently enters the staging area ahead of schedule. Former VP Biden notices.

"Who's that beautiful child?" pic.twitter.com/oGdQyt7s8g

After strangely asking 6 y.o. Billy if she was 17, telling her she can do "whatever she wants," former VP Biden proceeds to have an awkward exchange with Kelly, stroking Billy to the point it almost seems Kelly asks her son about the "cameras" intentionally.

One awkward moment after another. The mother's discomfort is clearly noticeable when Biden meets and poses with the children in her family. She strangely asks if picture taking is over early. Biden tells the kids "keep the boys away from their sisters." Sons called "protectors." pic.twitter.com/Esa0SEWyze

In this exchange, Senator Sullivan himself wonders if the picture-taking (& likely Biden being around his kids) is over. During the picture-taking, Biden physical moves Sullivan's daughter towards him, clutching onto her side. She even calls out for her father twice in confusion. pic.twitter.com/9voIJ10mG9

Visibly perturbed family members seem to be a running theme at these Biden led swear-ins. During this one, a family member almost looks as if she's using the prop she's holding to mask Biden's roaming hands, which are on her younger female relative. pic.twitter.com/o2fVhe5hda

During this confirmation swear-in ceremony, the senator involved loudly (and intentionally?) reminds Biden of his position by saying "this is the Vice President of the United States." Hair sniffing and eery whispers by Biden make an comeback in this clip. pic.twitter.com/9RSV1fOGoT

In this clip, Senator Cantwell introduces former VP Biden to her nieces, who all look visibly uncomfortable in his presence. The former Vice President then says "it's ripe" while whisper-speaking with Cantwell's young nieces. What on earth does he mean by that? pic.twitter.com/EGqYx8SG1a

While there are unfortunately many, MANY more disturbing clips like what has been previously witnessed, this last clip with Senator Joni Ernst concludes the video portion of this thread. Observe everything Biden says or does that leads to an uncomfortable laugh from Ernst. 😅 pic.twitter.com/gWFQ1IzdSE

Why must former Vice President Joe Biden habitually smell the hair of the women, little girls, and babies he meets? pic.twitter.com/U53mdueVFi

Though there is no actual evidence to suggest Biden did anything illegal, many on the left claim that all accusations about sexual assault should instantly be believed.

Although Judge Roy Moore has denied the allegations against him, he has been smeared as a pedophile by Democrats for the last week.