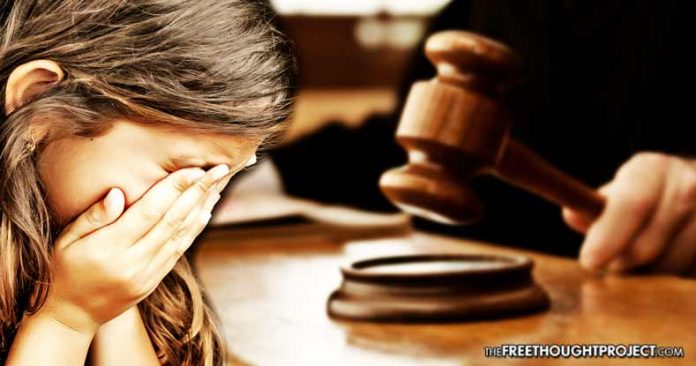 A recent French court case has sharpened the debate over the age of sexual consent and rape. This is the second recent case that highlights the normalize of pedophilia currently taking place across western society.

In the most recent case, a jury at Meaux, near Paris, said last week that the prosecution failed to prove any of the four criteria required for a rape conviction under French law – threat, violence, constraint or surprise.

The accused, a Cape Verde citizen now aged 30, who has not been named, admitted to meeting the 11-year-old girl in the street where she was playing, taking her to the park and engaging in sexual intercourse, which he claims was consensual.

According to a report in le Parisien newspaper:

Prosecuted for rape on minor under 15 years, the accused, a Cape Verdean today aged 30, was acquitted on Tuesday evening by jurors of the Assize Court of Seine-et-Marne. At the hearing, the Advocate General had required eight years of imprisonment, with a socio-judicial follow-up. On Friday, the public prosecutor’s office of the Paris Court of Appeal appealed this verdict. “Until 15 years old, a child must be preserved. You can not get him sex. His consent is not informed, “says Dominique Laurens, the prosecutor Meaux.

In the reasons for the judgment, the court explains that none of the elements of rape, namely, threat, violence, coercion or surprise, are established and there is doubt as to whether the accused had aware of coercing the one with whom he had sex. At no point in the verdict is there any mention of the age of the child.

“My client is traumatized,” says her lawyer Me Laure Habeneck. “In his defense, the accused referred to the African heat (sic). It is to be hoped that this justification will not be at the root of the jury’s deep conviction. It appears from this decision that a sexual relationship between a 22-year-old man and an 11-year-old girl is normalized in our society.“

The girl, who is of Congolese origin, was reportedly playing with her cousin when the man approached her and invited her for a walk in the park, according to le Parisien.

After going to the park, under the guise of going for a walk, the man – who was 22 at the time — proceeded to undress the girl and forced her to have sexual intercourse, says the 11-year-old victim. The girl claimed during the hearing that she asked the man to stop and told the stranger her age as he sexually assaulted her.

The man maintains the act was consensual, and that the girl told him she was almost 15 – the age of consent in France. To obtain a rape conviction, prosecutors needed to prove that the sex was non-consensual.

Despite the girl’s testimony about telling the man her age, the jury chose to believe the man who initially lied about engaging in a sexual encounter with the child.

“My client maintained at the hearing that the complainant lied to her about her age. He says they flirted,” said Samir Mbarki, attorney for the defense.

According to the girl’s counselor, who met her after the incident, she was of “girlish physique, [and] could not be confused with a teenager or a woman,” according to le Parisien.

The girl told no one of the alleged sexual assault, and the incident only coming to light after the girl’s family noticed she was pregnant months later.

Her mother told le Parisien: “The man has destroyed the life of my daughter.”

Prosecutors were seeking an eight-year jail term for the man, but after two days of hearings, an acquittal verdict was delivered. The decision has been appealed.

Apparently, the word of the defendant, who initially lied to investigators and said nothing happened between him and the young girl — only to later change his story about having sex with the 11-year-old girl — was enough to secure an acquittal.

In another recent case, a French court dropped rape charges against a 28-year-old man who allegedly raped an 11-year-old girl, as prosecutors claim the sex was “consensual” citing a lack of violence.

As we previously reported, authorities claim the child consented to the sexual acts and was not coerced into having intercourse, despite being 11-years-old, claiming that the child willingly followed the accused who had previously approached her twice for intimacy.

“There was no violence, no constraint, no threat, and no surprise,” the prosecution said.

That incident sparked mass outrage in France, as critics of the decision have noted that actual consent is not even possible at such a young age. The man is now charged with sexual assault of a minor under the age of 15 – with a maximum penalty of five years in prison – but not rape, which in France carries a sentence of fifteen years imprisonment and twenty years behind bars if the victim is a minor.

Both recent cases are similar in the fact that there was no “violence” was used to force the sex, although an argument could be made that taking off the clothes of an 11-year-old girl and penetrating her could constitute violence – especially given the fact that a child of that age has no ability to consent and little to resist.

In the wake of the case, human rights groups called for changes to French laws, saying a legal age under which sexual consent is never presumed should be introduced.

While it is currently illegal in France to have sex with anyone under 15, rape charges can only be brought if prosecutors can prove the act was non-consensual.

Despite its age of consent, France currently does not have any law which defines sex with someone below a fixed age as rape.

Currently, if there is no violence or coercion proved, people may only be charged with sexual abuse of a minor charge and not rape — which has a maximum sentence of five years in prison. The penalties for rape are much more severe.

In the wake of the recent decision, Justice Minister Nicole Belloubet said that the age of just 13 was now a “limit that is worth considering” by lawmakers, according to The Sun.

The man is set to be retired next year after the prosecution appealed his acquittal.

Please share this story in hopes of waking people up to the creeping normalization of pedophilia taking place across Western society!