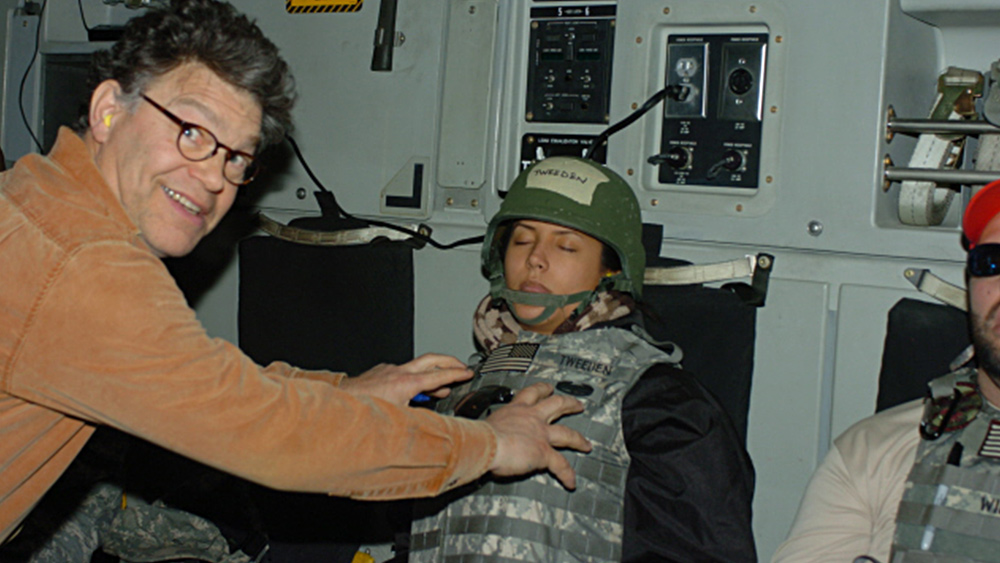 (Natural News) U.S. Sen. Al Franken, a Democrat, sexually groped an unconscious woman and proudly smiled for a sick photo to show off his deed to others.

The woman, named Leeann Tweeden, is a member of the media and has gone to the Middle East to help lift the morale of U.S. troops stationed there. She has now gone public with the details of the sexual assault in this article at KABC.com, where she says:

He groped me, without my consent, while I was asleep.

I felt violated all over again. Embarrassed. Belittled. Humiliated.

How dare anyone grab my breasts like this and think it’s funny?

This photo captured the moment: 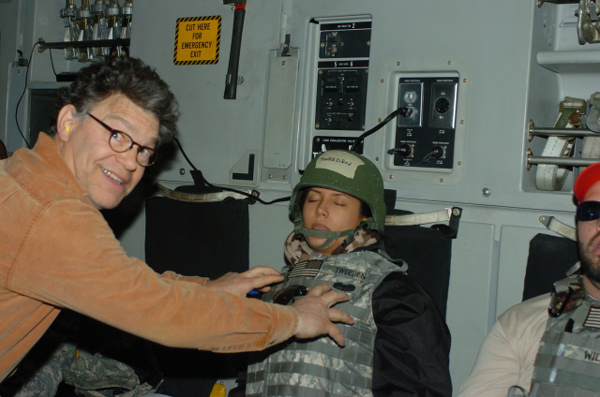 Tweeden goes on to describe her torment in living with the knowledge that she was sexually assaulted by Sen. Al Franken (@SenFranken on twitter)

I am angry that I didn’t call him out in front of everyone when I had the microphone in my hand every night after that. I wanted to. But I didn’t want to rock the boat. I was there to entertain the troops and make sure they forgot about where they were for a few hours. Someday, I thought to myself, I would tell my story.

That day is now.

Senator Franken, you wrote the script. But there’s nothing funny about sexual assault.

Like all Democrat perverts, Al Franken has long pretended to be a champion for women’s rights

Keep in mind that Al Franken, just like Harvey Weinstein, Kevin Spacey, Bill Cosby and all the other left-wing perverts who sexually assault women (or young men, in Spacey’s case), pretends to be a champion for women. He faithfully parrots all the right lines about liberalism, feminism and “progressivism,” but in the dark corners of his hidden closet, he’s a sex assault pervert just like all the rest of them. (Chime in on Sen. Franken’s Facebook page at this link.)

Democratic U.S. Senator Al Franken is the latest high-profile man in power to face a sexual assault accusation, after a model-turned-radio host wrote Thursday that the longtime comedian and comic writer kissed and groped her without consent during a 2006 USA tour in Afghanistan.

And he responded to Weinstein’s apparent history of serial sexual-assault last month in a stinging Facebook essay, saying that ‘the disappointing responses women often face when they go public both embolden harassers and encourage victims to stay silent’.”

Al Franken has issued a statement claiming the photo “was clearly intended to be funny but wasn’t.” Tweeden has also revealed that Al Franken used a Harvey Weinstein-like tactic to gain sexual access to women, claiming they needed to conduct a “full rehearsal” for a skit where he groped and kissed her.

“All I could think about was getting to a bathroom as fast as possible to rinse the taste of him out of my mouth,” Tweeden now writes. “I felt disgusted and violated.” (And who wouldn’t feel violated if Al Franken shoved his tongue into your mouth?)

The depths of sexual perversion festering inside the twisted mind of Al Franken are abundantly evident in this 2000 video where he cracks jokes about baby rape as part of a comedy routine. In this bit, he says:

Well, the success of The Dick Van Dyke Show changed things dramatically, Carl started inviting many of his famous friends to f#ck his son. That list includes some of the greats in comedy: Paul Lynde, Dom DeLuise, Rip Taylor, Danny Kaye, Charles Nelson Reilly and Rock Hudson – whom, I frankly don’t think is that funny. Thank you for doing so much to make sure another kid doesn’t end up like you…

To this day, Democrats and the left-wing media continue to cover up Bill Clinton’s sordid history of sexual assault and RAPE

No one who really knows what Democrat elitists are capable of doing is surprised by the truth about Al Franken. After all, the Democrats have long covered up the sexual assaults and rape crimes of Bill Clinton. Not only did they excuse his behavior for decades, they attacked and smeared the women who were victimized by Bill!

Contrast this with the current coordinated media attack blitz against Alabama candidate Roy Moore, who has been feverishly convicted in the court of public opinion even though the lawyer for his most recent accuser is a known political operative who routinely stages sex accusations solely against conservative candidates. The lesson here is inescapable: When Democrats sexually assault women, they are given a pass (and the women are smeared, defamed and discredited). But when Republicans are accused of questionable behavior (such as a 30-year-old dating high school girls), the accusations are given immediate and permanent authority and the female accusers are always believed and celebrated.

Recently, actor Brian Cranston even suggestion that Harvey Weinstein could be forgivenbecause he’s a Democrat. Yes, 30+ years of rape, sexual assault, perversion and twisted sicko behavior can be forgiven if you’re a Democrat who promotes abortion. That’s the philosophy of the mentally deranged Left. Even raping women can’t get you ostracized if you apologize and continue to support abortion and other left-wing causes.

Regardless of what you believe about Roy Moore, what’s especially interesting is that there has so far been no hard evidence of Roy Moore doing anything at all with young girls (no photos, no videos, no audio recordings, etc.). Even the now infamous high school yearbook signature looks to be a forgery, and when attorney Gloria Allred, who is “well known for trotting out women to confess to phony crimes against conservatives,” writes The Gateway Pundit, was asked to confirm the yearbook signature wasn’t forged, she refused to answer the question.

Many internet observers, meanwhile, have concluded that the Roy Moore signature in the yearbook was written in different colored ink than the rest of the message, leading many people to suspect the signature is a forgery and a setup. It fits the pattern of sex accusation setups that are routinely leveled against conservative candidates, including Justice Clarence Thomas, who barely survived a massive, coordinated sex assault charge campaign during his SCOTUS confirmation hearings.

How many more Democrats will be outed as sex perverts and predators? … Joe Biden?

With the bombshell story of Harvey Weinstein exploding everywhere, women who have long held dark secrets about being molested, assaulted or raped by powerful men are finally coming forward. It seems as if the entire culture has decided to air all the “dirty laundry” about sex assault and perversion. (And that’s a good thing!)

My only real question is: How many more Democrats are going to be outed as sex perverts as more revelations are made public? Joe Biden, for instance, has a well known reputation for groping not just adult women but even young children.

What’s especially amazing about all this is that most of the women who have been groped and sexually assaulted by these left-wing men are, themselves, Leftists. Yet even they can no longer remain silent about the perversion, contradiction and crude hypocrisy of these male Democrat sex predators who hide behind “liberalism” while systematically assaulting and objectifying women.

All the lies, perversion and abuse of these so-called “women’s rights” Left-wing men are now being made public. And it’s about time. Join us in calling for Sen. Al Franken to resign in disgrace, for his behavior is simply not acceptable for a United States Senator. Tweet him at @SenFranken to let him know what you really think. And find more reports of outrageous behavior among the political elite at OutrageDepot.com.