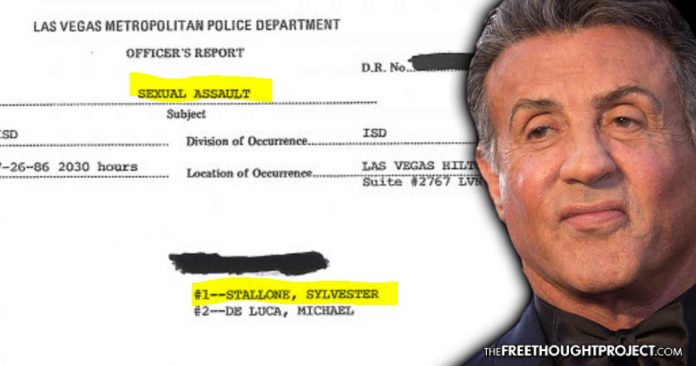 Shocking revelations have just come out detailing a police report filed on Sylvester Stallone for the alleged gang rape of a 16-year-old girl. Unlike previous instances of he said, she said, this case was documented—as soon as it allegedly happened—to the police.

The incident reportedly took place in Las Vegas with then 40-year-old Stallone was filming the hit movie Over the Top in the late 1980s.

As the report from Daily Mail notes:

Sylvester Stallone was accused of sexual assault by a 16-year-old girl while he was filming a movie in Las Vegas in the late 1980s, according to a bombshell police report obtained by DailyMail.com.

The Rocky actor was 40 years old when an unnamed teenager disclosed to Las Vegas police that she had been ‘intimidated’ into having sex with him and his bodyguard Michael ‘Mike’ De Luca at the former Las Vegas Hilton hotel in July 1986.

The 16-year-old claimed she had sex with Stallone and he encouraged De Luca to join them. At that point she became ‘very uncomfortable’ with the encounter but felt she had ‘no choice’.

De Luca then forced the teenager to perform oral sex on him before penetrating her, while Stallone made her give him oral sex, according to the police report.

To confirm the validity of the report, the Mail reached out to retired Las Vegas Metro police department detective sergeant John Samolovitch, who was head of the sexual assault unit at the time, and he confirmed that it is indeed a true copy.

After the alleged incident, the teen told police that she was threatened by Stallone as he turned to her and told her that if she said anything about it ‘they would have to beat her head in’, before laughing with De Luca.

According to the police report, the unidentified teen ultimately decided against pressing charges against either of her alleged attackers because she feared for her life as well as being “ashamed and humiliated.”

According to the Mail:

Police were alerted to the incident when a hotel employee called police to report that a friend of the victim said she needed advice on the matter.

When officials tracked down the teen, she relayed details of the alleged assault to them.

She said she was staying at the Las Vegas Hilton hotel with family friends for 10 days, from July 18 to July 28, during the time that Stallone happened to be filming at the hotel for the upcoming movie Over the Top.

The teen said she met actor David Mendenhall, who was playing Stallone’s son in the film, at the hotel’s arcade and he introduced her and her cousin to Stallone on Wednesday, July 23, 1986.

***
De Luca then gave her two keys for a room on the 27th floor and told her to go up to the room as soon as possible,’ according to the police report.

That night, the teen claims she went up to the 27th floor where she met Stallone and De Luca in the hallway and together, they all went into the hotel suite.

From there, the teen said she and Stallone went into the bedroom, got undressed and began having intercourse, while De Luca stayed in the bathroom.
The teen told police that they ‘really didn’t have sex’ because Stallone only inserted himself ‘a little ways’ into her and ‘only kept it in for a few seconds’.

Stallone remarked to the girl that she was ‘very tight’ before asking her if she ever had sex with two men at the same time, according to the report.

The report continued: ‘She indicated that if the sexual encounter had only been with Stallone, she would not pursue this matter, but due to the fact that Mike, the bodyguard became involved in the sexual incident, she didn’t know what she wanted to do.’

Ultimately, the extremely upset teen told police she didn’t want to press charges, saying, “I’m kind of scared and I’m very ashamed. I don’t want anybody else to have that happen to them, but I don’t want to prosecute. I cannot talk about this anymore, please leave me alone.”

While the report cites the fact that the victim chose not to press charges on her own, a woman who was allegedly present during the police testimony says it was the cops who told her not to pursue it because Stallone was powerful.

This incident was also reported on by the Baltimore Post Examiner, who “interviewed the mother of the victim’s girlfriend who was chaperoning the victim on their Las Vegas trip. She was present with the victim when she was being interviewed by the Sexual Assault Unit detectives.”

According to Doug Poppa, who conducted the interview, “She told me that the female detective had talked the victim out of pressing charges, telling her that Sylvester Stallone was powerful, had money and would drag her through the mud. She said that was a deciding factor as to why no charges were pressed.”

According to the Examiner, who also interviewed the victim last year, the woman, now 46, said that the incident has haunted her for three decades, but has come forward because she wants Stallone to understand how his actions have impacted her life. The Baltimore Post-Examiner does not identify names of victims or children of sexual incidents.

“He should be ashamed of himself, what he did to me affected my life and destroyed me,” she said in an exclusive interview with the Baltimore Post-Exam

After the incident, some cops still thought some sort of punishment should be issued and on July 30, LVMPD detectives confiscated De Luca’s gun permit. Below is a copy of the original report showing that police temporarily stripped De Luca of his concealed carry permit after the allegations. 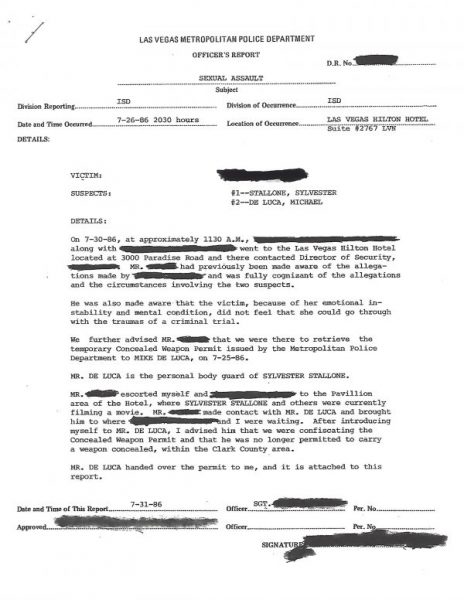