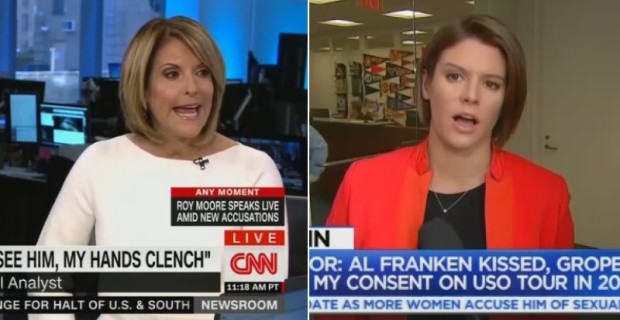 “Not actually groping, but mock-groping”

Mainstream media pundits on both CNN and NBC defended Senator Al Franken after a photo emerged of him groping a woman, with CNN’s Chief Political Analyst Gloria Borger pardoning the behavior because Franken “was just a comedian”.

TV host and sports broadcaster Leeann Tweeden accused Franken of groping her while she slept during a December 2006 USO tour to entertain the U.S. military, and provided photo evidence to prove it.

“I felt violated all over again. Embarrassed. Belittled. Humiliated,” wrote Tweeden. “How dare anyone grab my breasts like this and think it’s funny?”

In a separate incident, Tweeden said Franken tried to kiss her as part of a rehearsal for a skit and “aggressively stuck his tongue” in her mouth.

During an appearance on CNN’s Newsroom yesterday, Borger defended Franken by emphasizing how, “Leeann (Tweeden) did not call for him to step down or say he ought to step down.”

“He was not a member of the Congress at the time this occurred,” she added. “He was just a comedian.”

Borger went on to say that “Franken has no effect on her at this particular time in her life,” an odd statement given that Tweeden herself literally wrote yesterday, “I’m still angry at what Al Franken did to me.”

The CNN pundit then tried to deflect by demanding the focus be kept on Roy Moore and Donald Trump.

Meanwhile, over on NBC, corespondent and #MeToo supporter Kasie Hunt struck a similar tone, claiming that the infamous photo shows Franken, “not actually groping, but mock-groping her while she was asleep.”

As Chris Menahan observes, “Notice how Hunt completely ignored how Franken shoved his vomit-inducing tongue into her mouth?”

In another clip, Hunt again describes the incident as “mock groping,” despite the fact that Tweeden herself said Franken groped her breasts.

MSNBC's Kasie Hunt claims Franken was "mock-groping," not "groping" — not how Leeann Tweeden described it. pic.twitter.com/Si9evlh6QR

Hunt’s defense of Franken comes after she tweeted support for victims of sexual assault with the #MeToo hashtag just a month ago.

The reaction of both Hunt and Borger to Franken’s groping scandal again underscores the left’s rampant hypocrisy when it comes to sexual assault.

When the alleged victim is abused at the hands of a Republican, as in the case of Roy Moore, the media demands that the accuser be automatically believed.

However, in the case of a Democrat – with Bill Clinton being the biggest example – the victims are trashed and the abuse is downplayed or outright rejected altogether.