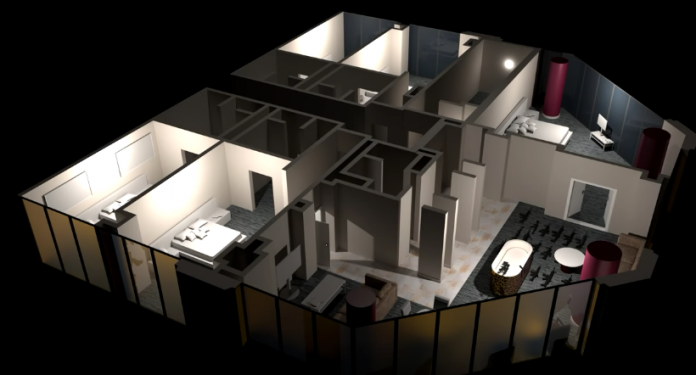 LAS VEGAS (INTELLIHUB) — Anyone who has been closely following the Las Vegas shooting investigation knows that Sheriff Joseph Lombardo, for whatever reason, has not been fully forthcoming about all of the events which took place on the night of October 1.

One glaring detail that throws a wrench in the entire Las Vegas Metropolitan Police Department’s official story in which authorities claim Stephen Paddock acted alone is the fact that the door which adjoins rooms 135 (Paddock’s suite) and 134 (a queen suite next to Paddock’s) was locked and had to be breached by SWAT after Paddock’s suite was secure.

If SWAT had to breach the door it had to be locked from the opposite side. If that’s the case, then who rented room 134? Did they exit into the hallway Campos was in?

As you may already know, on Nov. 1 Intellihub was the first to publish the precise video timestamp and a screenshot of what appeared to be a single ‘muzzle flash’ emitting from the room adjacent to Stephen Paddock’s 32nd-floor Mandalay Bay suite but now an independent ballistic analysis confirms the flash was, in fact, actual gunfire.

You can best view the flash by enlarging the video to ‘full screen.’

Here is a screenshot of the flash.

The following data was compiled by @jwillworld2000 on Twitter and reveals the flash was indeed an actual gunshot:

Keep in mind that many more shots were likely fired from that very same position but the number is unknown.

Based on the data we are seeing and video proof of muzzle flash it is safe to say that there was a shooter in room 32134 but it was not Paddock.

Additionally, as pointed out by the “HDRCFX Cornwall” YouTube channel, the venue did not appear to have 22,000 people inside it at the time of the massacre as reported by multiple news outlets. A number of 6000-7000 may be more reasonable for the Sunday night draw. It is not yet known if the dispute over turnout numbers has any significance.