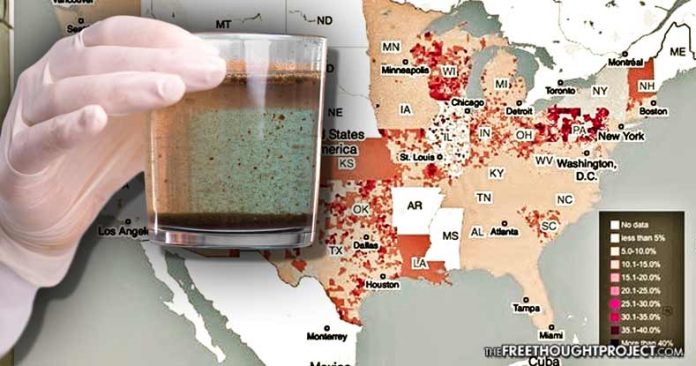 For years there has been an ongoing debate about the levels of lead that have been found in the drinking water in Flint, Michigan, but recent studies have shown that water conditions are just as bad in many other areas throughout the country.

In fact, Reuters recently published neighborhood-level blood lead testing results from 34 states, as well as Washington DC, which were collected by the Centers for Disease Control and Prevention (CDC). The results showed that 3,810 neighborhood areas have levels of lead that are at least double those seen in Flint. Close to half of these sites had levels that were actually four times as high as those in Flint.

Some of the areas shown to be affected the most were parts of Pennsylvania, New York, Baltimore and parts of Ohio. Researchers noted that areas which were heavily industrialized before lead was recognized as a problem have become hotspots for contamination. A color-coded map identifying many of these hotspots was published with the report, showing some of the highest levels of contamination in Savannah, Georgia; Brooklyn, New York; and even as far north as Rutland, Vermont.

The results showed that despite the fact that Flint had become the face of lead contamination in America, it doesn’t even rank among the most toxic water supplies in the country. Far from being a localized problem, it seems that water supplies throughout the entire country could be compromised. In 2013, prior to the Flint controversy, The American Society of Civil Engineers gave the nation’s water infrastructure a “D+” on their Report Card for America’s Infrastructure in 2013. It is estimated that the much-needed overhaul of the country’s water infrastructure could cost over $1 trillion.

“Restoring existing water systems as they reach the end of their useful lives and expanding them to serve a growing population will cost at least $1 trillion over the next 25 years,” a 2012 American Water Works Association (AWWA) report concluded.

However, the residents of Flint are still waiting on drinkable water, so it does not seem likely that any of these other areas will see help anytime soon. Just this week it was reported that Flint is still in negotiations for a long-term water contract while the city’s residents are still waiting on clean drinking water.

Environmental activist Erin Brockovich predicted this scenario would begin to unfold as more research was conducted. Brockovich is best known for building a case against the Pacific Gas and Electric Company (PG&E) of California in 1993. Since then she has been a world-renowned environmental activist and has even had a movie made about her activism, starring Julia Roberts.

Speaking in an interview last year, Brockovich said, “I can tell you that Flint, Michigan is the tip of the iceberg. I can tell you for certain that this is a national crisis that we are not getting ready to face. The crisis is already here. Even since Flint has hit the national stage, we’ve found out that Sebring, Ohio has the same problem … The same thing is happening in Louisiana, and we’re just now hearing rumors—I haven’t verified it before I came out—we’re having the same situation in Wisconsin.”

Lead contamination has become less of a widespread problem over the decades as it has been removed from products like paint and gasoline, but sadly the pipes that local and state governments are responsible for have not caught up with the times.