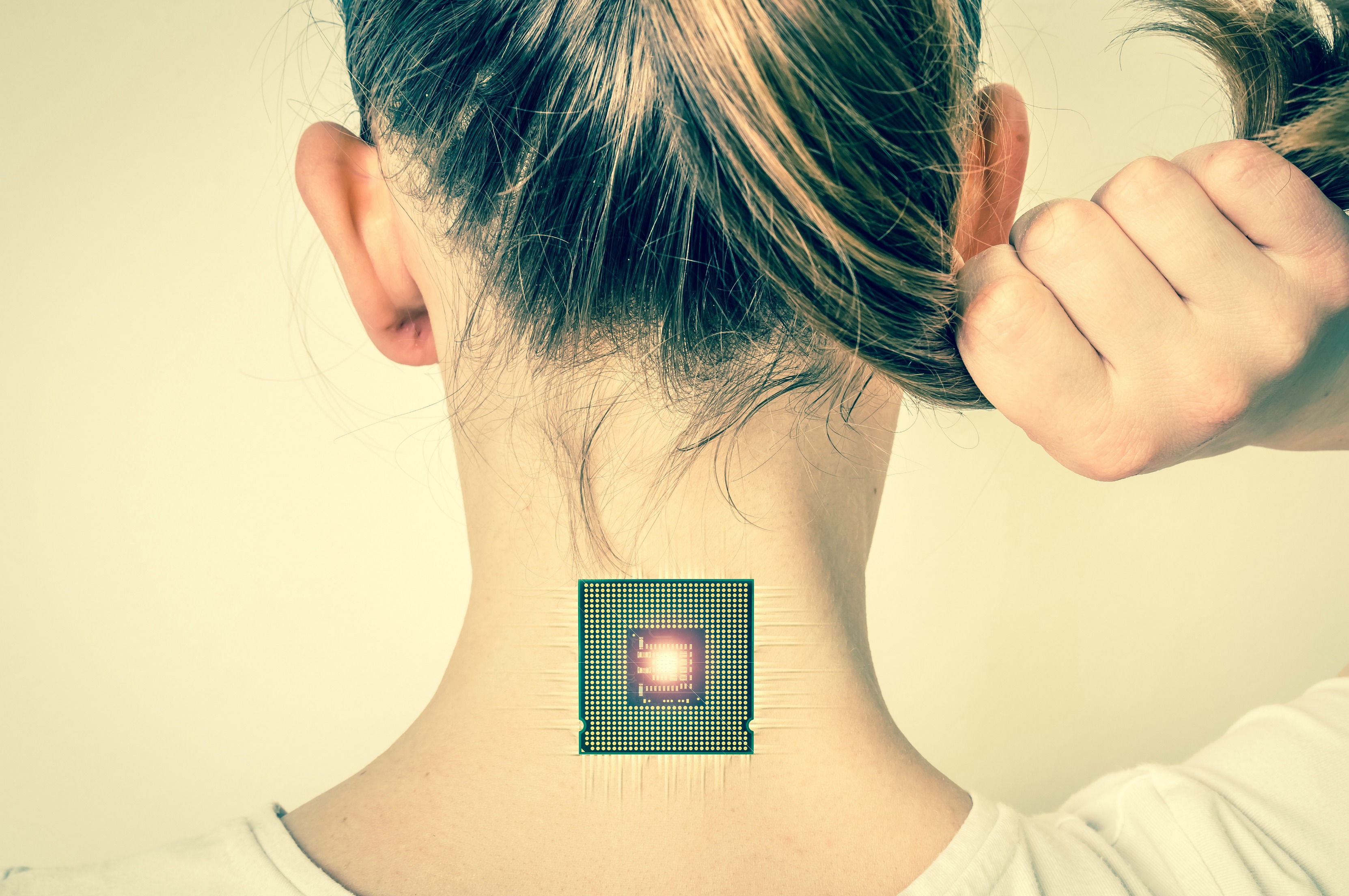 So…some people actually want to be microchipped like a dog. They’re lining up for it. They’re having parties to get it done. It if isn’t available to them, they’re totally bummed out.

I’m not even going to venture into the religious aspect of having a microchip inserted into a human being. Let’s just talk about the secular ramifications.

Certain folks won’t be happy until everyone has a computer chip implanted in them. Here’s how this could go.

Read on, because I could not make this stuff up.

Some employers are chipping workers.

Last summer, the internet was abuzz about a company in Wisconsin that wanted to microchip their employees. Workers at the technology company, Three Market Square, were given the option of having a chip implanted in their hands and 50 out of 80 eagerly lined up for the privilege.

Why? So they could buy food or swipe their way through building security with a wave of their hand. Software engineer Sam Bengtson explained why he was on board.

“It was pretty much 100 percent yes right from the get-go for me. In the next five to 10 years, this is going to be something that isn’t scoffed at so much, or is more normal. So I like to jump on the bandwagon with these kind of things early, just to say that I have it.” (source)

He wasn’t alone. In fact, they had a microchipping party and some people got chipped live on TV so the rest of us reluctant humans could all see how cool it was to get microchipped. Watch what fun they had!

It isn’t just this American company chipping workers. Here’s an example in Sweden.

What could pass for a dystopian vision of the workplace is almost routine at the Swedish start-up hub Epicenter. The company offers to implant its workers and start-up members with microchips the size of grains of rice that function as swipe cards: to open doors, operate printers or buy smoothies with a wave of the hand.

“The biggest benefit, I think, is convenience,” said Patrick Mesterton, co-founder and chief executive of Epicenter. As a demonstration, he unlocks a door merely by waving near it. “It basically replaces a lot of things you have, other communication devices, whether it be credit cards or keys.” (source)

Alessandro Acquisti, a professor of information technology and public policy at Carnegie Mellon University’s Heinz College, warns that this might not be a good idea. (Although it doesn’t take a Ph.D. to realize this.)

“Companies often claim that these chips are secure and encrypted…But “encrypted” is “a pretty vague term,” he said, “which could include anything from a truly secure product to something that is easily hackable.”

Another potential problem, Dr. Acquisti said, is that technology designed for one purpose may later be used for another. A microchip implanted today to allow for easy building access and payments could, in theory, be used later in more invasive ways: to track the length of employees’ bathroom or lunch breaks, for instance, without their consent or even their knowledge.

“Once they are implanted, it’s very hard to predict or stop a future widening of their usage,” Dr. Acquisti said. (source)

Pretty soon, experts say everyone will want to be microchipped.

Many sources say that it’s inevitable that we’re all going to get chipped. Noelle Chesley, an associate professor of sociology at the University of Wisconsin-Milwaukee, says it’s inevitable.

“It will happen to everybody. But not this year, and not in 2018. Maybe not my generation, but certainly that of my kids.” (source)

Another pro-chipping advocate, Gene Munster, an investor and analyst at Loup Ventures, says that we just have to get past that silly social stigma and then everyone will be doing it within 50 years. Why? Oh, the benefits.

The company, which sells corporate cafeteria kiosks designed to replace vending machines, would like the kiosks to handle cashless transactions.

This would go beyond paying with your smartphone. Instead, chipped customers would simply wave their hands in lieu of Apple Pay and other mobile-payment systems.

The benefits don’t stop there. In the future, consumers could zip through airport scanners sans passport or drivers license; open doors; start cars; and operate home automation systems. All of it, if the technology pans out, with the simple wave of a hand. (source)

There are other companies who are on board with chipping everyone.

At a recent tech conference, Hannes Sjöblad explained how a microchip implanted in his hand makes his life easier. It replaces all the keys and cards that used to clutter his pockets.

“I use this many times a day, for example, I use it to unlock my smart phone, to open the door to my office,” Sjöblad said.

Sjöblad calls himself a biohacker. He explained, “We biohackers, we think the human body is a good start but there is certainly room for improvement.”

The first step in that improvement is getting a microchip about size of a grain of rice slipped under the skin. Suddenly, the touch of a hand is enough to tell the office printer this is an authorized user.

The microchips are radio frequency identification tags. The same technology widely used in things like key cards. The chips have been implanted in animals for years to help identify lost pets and now the technology is moving to humans.

Tech start-up Dangerous Things has sold tens of thousands of implant kits for humans and some to tech companies in Europe.

Sjöblad said he even organizes implant parties where people bond over getting chipped together.  (source)

Will microchipping parties be the next generation of those outrageously expensive candle parties? Will folks be pimping microchips like they do those scented wax melts? Will it become some kind of MLM thing to make it even more socially acceptable?

A UK newspaper, the Sun, explains how awesome it is to be microchipped.

The woman sat next to you could be hiding an implant under the skin which slowly releases hormones to stop her from getting pregnant.

Nans and granddads across the nation come installed with cutting-edge technology installed just to boost their hearing and vision seeing or help them walk with comfort.

We’re preparing ourselves for the next form of evolution in which humans will merge with artificial intelligence, becoming one with computers.

At least that’s the belief of Dr. Patrick Kramer, chief cyborg officer at Digiwell, a company that claims to be dedicated to “upgrading humans”. (source)

Seriously, who wouldn’t want all that awesomeness in their lives?

There are some serious pitfalls

While the current chips being “installed” in humans are said not to have GPS tracking, don’t you figure it’s just a matter of time? And also, how do you KNOW that there is no GPS tracking technology in that teeny little chip? Just because they tell you so?

Then there is the issue of the chip in your body being hacked.

“This is serious stuff. We’re talking about a nonstop potential connection to my body and I can’t turn it off, I can’t put it away, it’s in me. That’s a big problem,” said Ian Sherr, an executive editor at CNET.

“It’s very easy to hack a chip implant, so my advice is don’t put your life secrets on an implant, Sjöblad said…

“It’s about educating the people and giving every person the tools…not only how to use the technology but, more importantly, when it’s being used against you,” Sjöblad warned.  (source)

And microchipping won’t stop with a payment chip in your hand.

The endgame is microchipping people’s brains. And folks are chomping at the bit to get them. Scientists are saying that they can fix mental health issues with brain chips, they can make people smarter, and help them “merge” with AI. A chipped person could, theoretically, think his thoughts right onto his computer.

So, with these chips in our brains, we’ll actually be merging with computers to some degree. The robot overlords will have a pretty easy takeover if our brains can be accessed like this.

Microchips may not be optional one day.

This horror movie gets even scarier. There is already a law on the books that potentially allows human beings to be forcibly chipped.

Oh, it’s couched in warm, fuzzy language and they say it’s just to help keep track of folks with Alzheimer’s or other developmental disabilities, but remember that the most unpatriotic law ever passed was also called the Patriot Act.

It directs the Department of Justice’s (DOJ’s) Bureau of Justice Assistance (BJA) to award competitive grants to health care, law enforcement, or public safety agencies, and nonprofit organizations, to develop or operate locally based proactive programs to prevent wandering and locate missing individuals with dementia or children with developmental disabilities. The BJA must give preference to law enforcement or public safety agencies partnering with nonprofit organizations that use person-centered plans and are directly linked to individuals, and families of individuals, with dementia or developmental disabilities. (source)

Despite the fact that the bill requires everyone to use privacy “best practices,” it’s not that much of a stretch to see what a slippery slope this is. Who gets to decide whether a person “needs” to be chipped for their own good? Law enforcement. Scary.

Could this lead to a cashless society?

If “everyone” is getting microchipped like these experts predict, that could be the next step in the push toward a cashless society. Think about the lack of privacy then. If everything is purchased via a chip unique to you, then no purchases could be under the radar. Whether a person was stocking up on food, watching X-rated movies, reading books on revolution, or buying ammo, it would all be recorded in a database. Our purchases could be used in some kind of pre-crime technology, ala Minority Report, or they could be used to profile us in other ways.

If there is no way to make purchases but with a chip, many people will have to reluctantly comply. The same chips could be a requirement for medical care, driver’s licenses, jobs – you name it. No matter where you tried to hide, your GPS locator would mean that you would be found. It would be like everyone being forced to have one of those ankle bracelets that criminals wear, except it would be inside your body.

If you think the atmosphere of control is unnerving now, just wait. When everyone is microchipped, the net will be even tighter.

Between the pending robot apocalypse that I wrote about earlier this week and forcible microchipping, it seems like we won’t have to wait for “climate change” or a war of Mutually Assured Destruction to get us. Technology just might be the end of humanity.