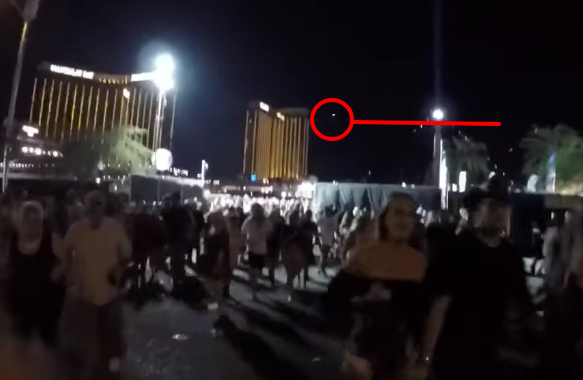 LAS VEGAS (INTELLIHUB) — If you have been following my reports on the Las Vegas Shooting than you are likely aware of my “helicopter theory” which I presented in great detail on “The Alex Jones Show” Halloween day.

On the broadcast, I presented a portion of the information I possessed at the time as a “theory” in order to fill in the blanks for the listening audience by explaining exactly how an advanced air assault and extraction were indeed possible despite the fact that I already had seen enough evidence at the time to conclude in my mind that helicopters were indeed operating within the airspace around the vicinity of the venue before, during, and after the massacre took place.

9:47 p.m. — A southward bound Airbus EC130 helicopter displaying the callsign “MH854” arrives just to the west side of Mandalay Bay and appears to hover, according to archived flight data from FlightRadar24.com.

9:49 p.m. — Two minutes later, a second southward bound Airbus EC130 helicopter displaying the callsign “MH848” arrives just to the west side of Mandalay Bay and appears to hover, according to archived flight data from FlightRadar24.com.

9:50 p.m. — A minute later, a third southward bound Airbus EC130 helicopter displaying the callsign “MH858” arrives just to the west side of Mandalay Bay and appears to hover, according to archived flight data from FlightRadar24.com.

Video footage posted to the “itis flat” YouTube channel on November 13 proves that “MH854” and “MH848” were both, in fact, flying southbound just to the west of the Mandalay Bay as the radar shows between the hours of 9:47 and 9:49 p.m. Both of which appeared to be below the roofline of the Delano approximately 350 feet above ground level (AGL). And although there is no visual evidence that a third chopper “MH858” arrived, flight radar data shows otherwise.

So we have visual confirmation that at least two helicopters were flying southward just west of the Delano Hotel toward the positions in which they appear to hover on flight radar for approximately one minute before their transponder signals go dark altogether and can no longer be seen on radar.

Using an unedited video posted to the “Arch Angel Studios” YouTube channel in its entirety on Oct. 2 as a reference point/baseline I have managed to establish a solid timeline which syncs directly with flight radar data provided by FlightRadar24.com.

In order to better see and comprehend this data, I kindly ask that you watch the video in “full-screen mode” and experiment with adjusting the video’s speed to 25% by using the YouTube settings.

Based on my detailed analysis of the matter I have set the starting time for the “Arch Angel Studios” video to 10:01:29 p.m. local time, Oct. 1, 2017. With that being said, I have identified the first visible aircraft which can be seen in the video occupying the airspace between the Delano Hotel and the Mandalay Bay as the video starts.

The aircraft is displaying the callsign “FFT1122” which is Frontier Airlines flight F91122. The airliner just departed McCarran International Airport to the west and is in route to Cincinnati. The aircraft can be found on both video and radar (i.e. it exists).

The following image shows “FFT1122” on the radar within the videographer’s line of sight between the Delano Hotel and Mandalay Bay at precisely 10:01:30 p.m. local time, confirming the aircraft’s existance on both mediums.

The second aircraft can be seen occupying the airspace between the Delano Hotel and Mandalay Bay at 10:04:36 p.m. and is displaying the callsign “FFT1116.” The aircraft is Frontier Airlines flight F91116. The airliner just departed McCarran International Airport to the west and is in route to Cleveland. The aircraft can be found on both video and radar (i.e. it exists).

Again, these visual/radar matches have allowed me to establish a baseline for this presentation.

The following image shows “FFT1116” on radar within the videographer’s line of sight between the Delano Hotel and Mandalay Bay at precisely 10:04:36 p.m. local time.

Helicopter appears in video but not on radar

Between 10:02:06 p.m. and 10:02:23 p.m. (0:36-0:53 seconds into the video) a helicopter can be seen aloft the airspace between the Delano Hotel and Mandalay Bay, beyond the two buildings to the west. The aircraft appears to be flying well below the roofline of the two buildings and is moving slowly in a southeasterly direction. Furthermore, the helicopter appears to be emitting flashes inconsistent with FAA approved running lights (i.e. the flashes are not created by running lights.)

The following image illustrates how there are no aircraft showing on the radar for miles anywhere to the southwest of hotels yet we have what appears to be a helicopter flying low, between the two hotels, from north to southeast before it appears to take refuge behind the Mandalay Bay at 10:02:23 p.m.

Two tour helicopters return to base

At 10:02:47 p.m. (1:18 into the video) two helicopters can be seen overflying the New York New York and the Excalibur, just to the north of the Route 91 Harvest Music Festival venue.

The two helicopters (N208SH, and N213SH) are registered to “Sundance Helicopters” and are returning to the airpark where they land a moment later.

Helicopter spotted on video flying southbound just to the west of the Luxor, heads to the airspace between the Delano Hotel and Mandalay Bay

Within seconds it ends up in the airspace between the Delano Hotel and Mandalay Bay which seems to be rather popular just before and throughout the ten o’clock hour.

Between 10:07:58 p.m. and 10:08:08 numerous flashes can be seen coming from several different aircraft hovering at several different elevations (between 200 and 300 feet above ground level) in the airspace between the Delano Hotel and Mandalay Bay.

Gunfire can be heard during this time.

Again, these aircraft are captured on video but are not displaying their callsigns on the flight radar.

There appears to be three of them hovering between 200 and 300 feet above ground level (AGL).

By 10:08:39 p.m. A helicopter can be seen retreating toward the airpark from the southeast side of the Mandalay Bay, from behind the building, rising above the roofline.