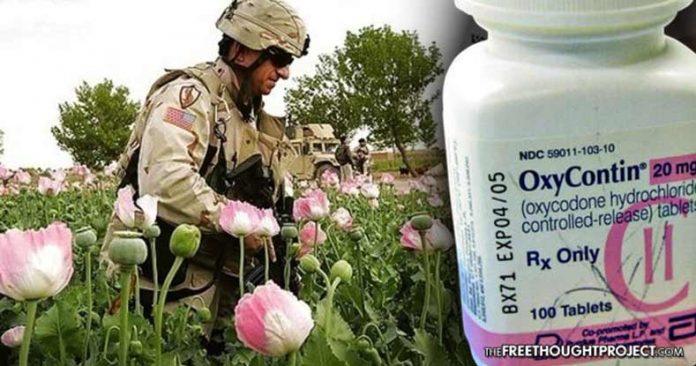 The opioid crisis has killed thousands in the United States, and as more than 100 Americans die every day, opium poppy cultivation has hit a record high in Afghanistan in 2017. Coincidentally, President Donald Trump’s troop surge in Afghanistan has essentially been completed, boosting the number of service members on the ground from 11,000 to 14,000, the Pentagon said this week.

“We’ve just completed a force flow into Afghanistan,” Marine Lt. Gen. Kenneth McKenzie, the Pentagon’s Joint Staff Director, said at a news conference. “The new number for Afghanistan is now approximately 14,000—might be a little above that, might be a little below that, as we flex according to the mission.”

Coinciding with the completion of the troop surge, the United Nations Office on Drugs and Crime and Afghanistan’s Ministry of Counter Narcotics released a report claiming that the “area under opium poppy cultivation increased by 63% since 2016, reaching a new record high.”

“There is no single reason for the massive 2017 increase in opium poppy cultivation in Afghanistan … Rule of law-related challenges, such as political instability, lack of government control and security, as well as corruption, have been found to be main drivers of illicit cultivation. also impact farmers’ decisions, for example scarce employment opportunities, lack of quality education and limited access to markets and financial services continue to contribute to the vulnerability of farmers towards opium poppy cultivation.”

As a result of the increase in 2017, the report acknowledges, “The significant levels of opium poppy cultivation and illicit trafficking of opiates will probably further fuel instability, insurgency and increase funding to terrorist groups in Afghanistan. More high quality, low cost heroin will reach consumer markets across the world, with increased consumption and related harms as a likely consequence.”

As TFTP has previously reported, a former British Territorial Army mechanic, Anthony C Heaford released a report two years ago, and a series of photos, which he says proves that British and American troops are harvesting opium in Afghanistan.

Not only is the increase in opium poppy cultivation hurting civilians in Afghanistan and fueling the same terrorist groups the United States claims to be working to defeat, it has made Afghanistan responsible for producing 90 percent of the world’s opium supply.

That supply is having a direct effect in the United States where more Americans died from drug overdoses in 2016 than were killed in the Vietnam War. That number has only continued to increase in 2017, with more than 100 Americans dying every day—meaning that opioids are killing more Americans than car crashes and gun deaths combined.

The Afghanistan War has cost American taxpayers more than $1 trillion over the last 16 years, and it has resulted in more than 31,000 civilian deaths. While the media does not publicize it, and most politicians won’t acknowledge it, the record number of deaths from opioid overdoses in the U.S. is a direct result of the record-high opium cultivation in Afghanistan—where U.S. troops are literally guarding the plants.