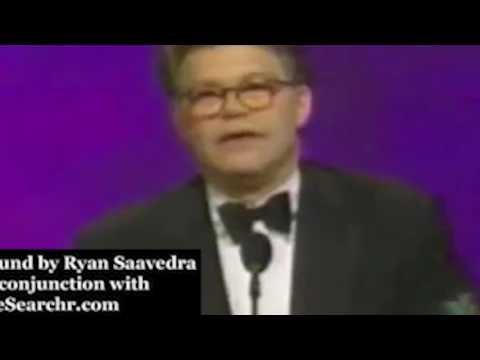 In 2000, Comedy Central hosted the N.Y. Friars Club Roast of director Rob “Meathead” Reiner. The roast was recorded and released as a TV movie on November 1, 2000.

One of the roasters was Senator Al Franken (D-Minnesota), 66, who is very much in the news for groping sports commentator Leeann Tweeden’s breasts while she was asleep. (Franken was narrowly elected senator in 2008.)

Here’s a transcript of Franken’s roast:

Franken: “On a typical night, Carl [Reiner] would slip into Rob’s bed, roll him over, swab him down and say something like, ‘I’m thinking about hiring Morey Amsterdam to play Buddy Sorrell, what do you think?’”

Franken: “Well, the success of The Dick Van Dyke Show changed things dramatically, Carl started inviting many of his famous friends to fuck his son.”

Fox19 reports, October 5, 2013, that Lorain County police arrested James Osborne, a registered sex offender, and confiscated a laptop found in his apartment which contained a video of Heather Koon, 25, “engaging in sexual conduct with an unknown infant”.

Police had to figure out who the child was, and determined the child was one of the children in the ABC Kidz Child Care Center in Elyria, Ohio, where Koon was an employee.

The child’s father, who wants to remain anonymous, said:

“I still haven’t wrapped my mind around it. It’s every parent’s worst nightmare. They [ABC Kidz] tried to act like it was a simple assault. A few hours later they called us back again and asked us to keep it discrete. Any child [at ABC Kidz] that’s old enough to talk, they should talk to. Any child that’s not old enough to talk should be taken to a physician.”

Although I had known about Tribe months ago, I couldn’t bring myself to post about it because what Tribe‘s members write about is so horrific and demonic.

So, consider yourself forewarned.