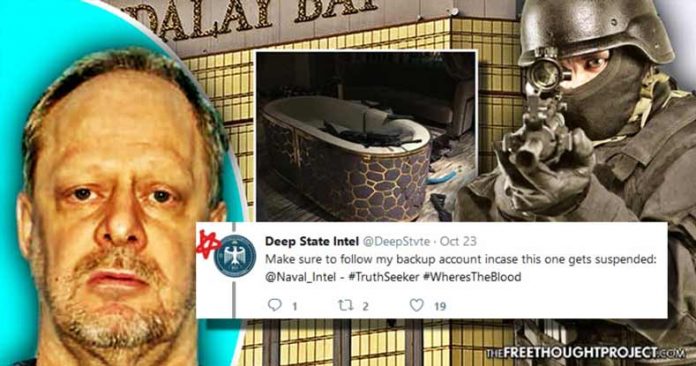 Las Vegas – In another strange twist to the largest mass-shooting in recent U.S. history, a damning report indicates that the parent company of the Mandalay Bay Resort and Casino, MGM Resorts International, is paying crisis management firm Joele Frank to spread disinformation about the massacre online.

According to a bombshell report, published by Thomas Michael on Medium, the crisis management firm is deliberately spreading ridiculous conspiracy theories on social media in an attempt to discredit legitimate inquiry into the bizarre official narrative—and actively trying to muddy the water about events surrounding the mass-shooting.

The report details how MGM International hired Joele Frank to run damage control in the wake of the deadly attack that left 58 people dead on Oct. 1. Michael’s report subsequently exposes ties between the crisis management firm and numerous Twitter accounts posting clearly bogus conspiracy theories about the mass-shooting, claiming “the shooting was fake, there was no blood, no victims, crisis actors, the whole nine-yards.”

The report goes on to explain how Michael discovered that a significant portion of the disinformation on Twitter concerning the Las Vegas massacre was originating from an account with the handle @DeepStvte.

Curiously, the @DeepStvte account is heavily connected with bots, which helped it spread nonsensical conspiracy theories about the shooting, according to GotNews.

Michael then made a number of disturbing discoveries upon further investigation:

“Now, here is where it gets really weird. Sifting through every reply on the DeepStvte account, I discovered someone who made a few replies in the comment sections — an individual by the name of Mr. Scott Bisang, handle @sbis85. Upon further research, Mr. Bisang is the Head Manager of Joele Frank, the crisis management firm that Mandalay Bay hired after the 1 October Shooting. So, when I searched his Twitter to find his comments on the Las Vegas Massacre again for this piece, all of the posts/replies had been deleted.”

The Medium report goes on to expose an intentional disinformation campaign by the crisis management firm to confuse people who are seeking answers to the tragic Las Vegas massacre:

“Furthermore, the REAL conspiracy theories that were being propagated by the above mentioned Twitter handles were pushing stories such as the shooting was fake, there was no blood, no victims, crisis actors, the whole nine-yards; while simultaneously discrediting any viable theories made by the public. These are, without question, professionals. And, when I mean pushing their real conspiracy theories: they were getting 7.5M impressions at one point in October on Twitter. This was a direct disinformation campaign designed to lure folks who were questioning the official narrative into being told fairy-tales about what actually happened that night, and thus become discredited as ‘conspiracy theorists’ after they rattle off some absurd story that they were told by one of those Twitter handles.”

Make no mistake that such a massive, and well-coordinated, disinformation campaign is the work of top-notch public relations/crisis management specialists.

The shooting disappearing from the news cycle, amidst so many unanswered questions, has only served to heighten suspicions that the entire story is being intentionally pushed aside by the ruling oligarchy and their mainstream mass media cronies.

In the pursuit of truth and justice, we must ask ourselves:

Why has the Mandalay Bay—from which Stephen Paddock allegedly carried the largest mass-shooting in recent U.S. history—hired a crisis management firm to run coordinated disinformation campaigns against the American public?

Please share this story if you think it is extremely strange that the crisis management firm hired by MGM International is running intelligence operations to confuse the facts of the case and muddy the waters!