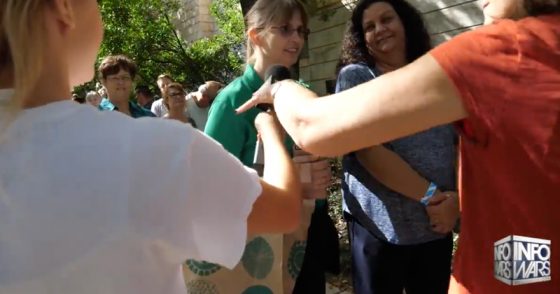 Recently released footage taken during a Hillary Clinton event in Austin, Texas shows a vicious group of women Clinton supporters attacking independent reporter Millie Weaver after she asked them a question they did not like.

Weaver, covering the event for Infowars.com, attempted to ask multiple different liberal women what their take was on Bill Clinton’s documented history of sexual violence against women.

For a group and party supposedly dedicated to women’s rights, the response Weaver was given was startling to say the least.

From having her microphone pushed out of her hand to being flipped off directly in her face, the hoard of Clinton zombies showed their true colors, all because Weaver dared to ask them a question that they have purposefully chosen to ignore for years.

Weaver began her report by explaining the planned Clinton event and noting that she had chosen to wear a t-shirt that exposed Bill Clinton’s long history of sexual violence in the hopes that the female Hillary supporters would be interested in discussing these alleged crimes but perhaps knowing that they would most likely be “triggered” by the mere mention of them.

Weaver then encountered a security guard who claimed that he worked for the property owner but had actually been filmed doing security for the Clinton motorcade. In other words, a Clinton crony was sent to bother Weaver almost immediately.

Clinton fans then laughably claimed that the documented fact that Clinton helped sell off some of our uranium to the Russians is “fake news.”

The same women who claimed that a verified fact is fake news also refused to answer a question about how she feels about all the women accusing Bill Clinton of sexual assault by turning her answer into a question itself about disinformation she heard from the mainstream media regarding Alex Jones.

Another Clinton zombie was so triggered that she actually grabbed Weaver’s microphone in a clear attempt at squashing both free speech and the rights of the press.

Perhaps the most shocking part of the entire exchange between Weaver and the Clinton zombies came when employees of the book store where Clinton was signing her excuses filled book actually came up to Weaver and demanded that she leave under the threat of violence.

“I’m sorry I need for you to go because you are upsetting people,” one of the liberal store employees laughably claimed. (Keep in mind they were on a public sidewalk)

After Weaver replied that she needed them to get out of her face, the other store employee decided to threaten the independent (female) reporter.

“We care about our customers, this is a customer event, you need to go or we are going to call other people to get you out of her,” the store employee threatened.

These are truly brainwashed morons.