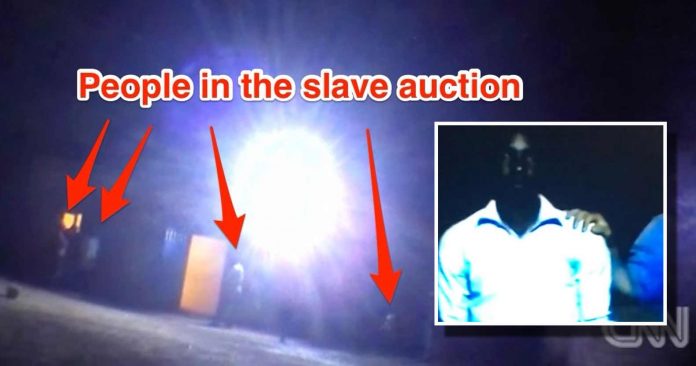 Refugees are being kidnapped from Libya and Niger, and sold in auctions for as little as $400, according to an investigative report that documented the abuse in war-torn Libya through hidden cameras that showed young men being lined up to be inspected for buyers, with auctioneers referring to them as “merchandise” and “big strong boys for farm work.”

It is highly likely that there are even more barbaric auctions held for females, and there have been widespread reports of this happening, but so far no footage has been collected of these crimes.

While this is the first footage of this nature that the public has seen, there have been reports of slave auctions in Libya for at least the past year. “The situation is dire. The more IOM engages inside Libya, the more we learn that it is a vale of tears for many migrants. Some reports are truly horrifying and the latest reports of ‘slave markets’ for migrants can be added to a long list of outrages,” Mohammed Abdiker, IOM’s Director of Operation and Emergencies said in a report last year.

Despite the frequent reports of forced labor, sex-trafficking and torture inside Libyan refugee camps, there has been little to no response from local authorities—but now that the news has gone international, the region’s puppet politicians are promising change.

Anes Alazabi, Libya’s Anti-Illegal Immigration Agency told CNN that a full-scale investigation will be launched as a result of their report. However, the agency provided no solutions to the problem aside from taking refugees right back to the violence that they are fleeing in the first place.

“A high-level committee has been convened encompassing representatives from all the security apparatus to oversee this investigation. Priorities of the investigation are not only to convict those responsible for these inhumane acts, but also to identify the location of those who have been sold in order to bring them to safety and return them to their countries of origin,” Alazabi said.

More than 8,800 stranded refugees have been returned home this year, according to the International Organization for Migration.

The mainstream media has framed this as a “migrant crisis.” However, it is important to point out that these people are obviously refugees from war-torn countries that have suffered military destabilization and occupation by US and NATO forces.

The US invasion of Libya has been highly publicized, and it is well known that the country is in worse shape than it was before, with the war creating social conditions that allow crimes against humanity to run rampant. Large numbers of these refugees are also coming from Niger, where the US military has been waging secret operations that were exposed last month when members of the US special forces were killed during their occupation of the country.

According to the International Organization for Migration, there are roughly 700,000 to 1 million migrants in Libya, and it is estimated that more than 2,000 have died at sea in the past year alone.

Refugees, as TFTP has reported in the past, become easy targets for human traffickers as they have no money and nowhere to go. The children are often kidnapped and sold into child trafficking rings and the adults are sold into slavery as indentured servants to the elite.

The United Kingdon has become a hotspot for such trafficking. There are an estimated 13,000 victims of forced labor, sexual exploitation and domestic servitude in Britain, according to Government data and the police have no idea how to handle it.

Luckily, however, this horrifying practice is now getting the attention of the mainstream media as enough people are demanding it.

News of the slave auctions sparked protests outside of the Libyan Embassy in Paris, where many refugees have fled to escape this type of violence. French police used riot gear and tear gas to suppress over a thousand protesters. The French government is not innocent in the conquest of Libya either, they were one of the first countries to push NATO into the war, and it was the first country to use their aircraft in strikes against the country.