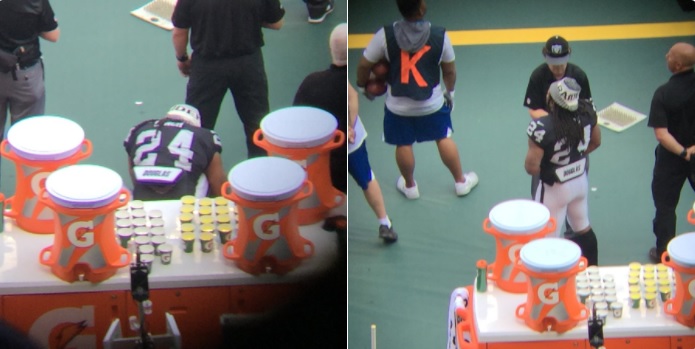 These protests are purely about hating America.

Raiders running back Marshawn Lynch sat during most of U.S. anthem and stood for the Mexican anthem before their game against the Patriots at Azteca Stadium in Mexico City.

Marshawn Lynch sits during the US national anthem, stands for Mexican anyhem pic.twitter.com/8wdaKprEki

Lynch has not stood for the national anthem since returning from retirement this season.

Here’s the video, he’s at the bottom next to the Gatorade coolers:

Afro-Mexicans are treated like garbage and subject to extreme, racist violence in Mexico. Lynch has no problem standing for their national anthem.

As I said, this is purely about hating America.

Marshawn Lynch of the NFL’s Oakland Raiders stands for the Mexican Anthem and sits down to boos for our National Anthem. Great disrespect! Next time NFL should suspend him for remainder of season. Attendance and ratings way down.