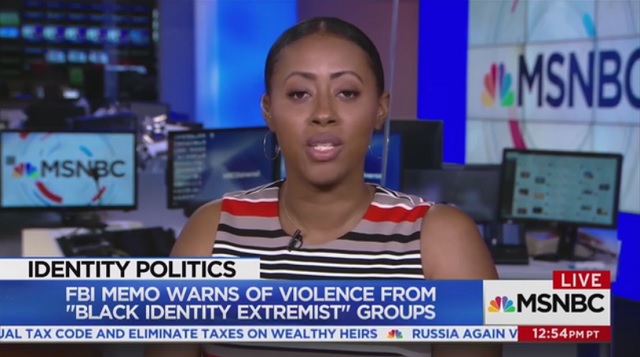 According to MSNBC panelist Jamira Burley, it’s “documented and verified” that white men “pose the biggest threat to Americans every single day.”

In a segment about the Justice Department looking at “Black Identity Extremist” groups, Burley said, “Again it continues to try to undermine and criminalize our leaders in a way that undermines the movement. We saw that with MLK when J. Edgar Hoover wrote letters telling him to commit murder, we saw that when Fred Hampton was actually assassinated by police.”

She continued, “And so I think this is nothing new, what is interesting though is that white men continue to be the–pose the biggest threat to Americans every single day. It’s been documented and verified that they are more likely to burn down churches, more likely to commit mass murders and mass shootings and so Jeff Sessions’ reality and his assessment on these people is both lacking in facts and both reality.”

Burley also said white Americans are trying to “demin [sic]… demean” and “vilimize [sic] our leaders” in a way that is “counter-productive to moving our society in the right direction.”

I agree, the vilimization of black identity extremists must come to an end.

In other news, the FBI released crime stats numbers for 2016 about a month ago. Shockingly, white Americans were not the greatest threat.