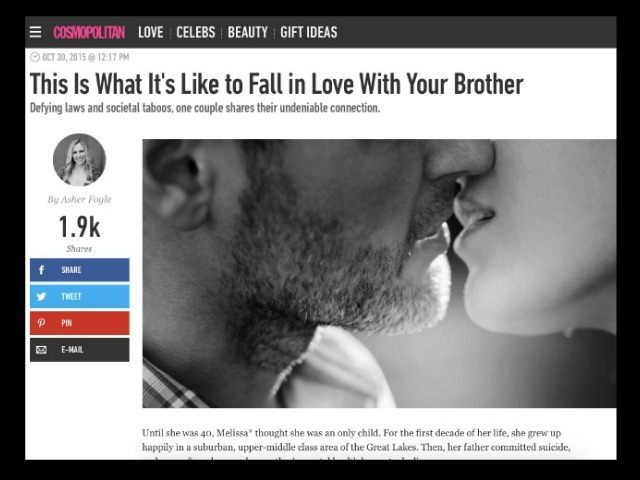 There is a decided push underway to make legitimate, if not legalize, incest — all in the name of “love”. See:

Never mind that incest is a long-standing cross-cultural taboo, the purpose of which is to prevent genetic defects. See:

That filthy piece of trash, Cosmopolitan magazine, is now promoting incest in the guise of an article by Asher Fogle about a brother and sister in Great Lakes heroically “defying laws and societal taboos” by “falling in love” with and screwing each other.

Note: Asher Fogle is the features editor of Good Housekeeping. According to Geni.com, Fogle is a variation of Fogel, which Ancestry.com identifies as an Ashkenazi Jewish surname.

The woman, Melissa (not her real name), already had a live-in “much-older lover” when she was only 14, because her mother “had no boundaries” and spoiled Melissa “rotten,” allowing the girl to “do anything”. Melissa’s father had committed suicide.

When Melissa was 40, a man named Chris (not his real name either) contacted her on Facebook, claiming that they have the same biological father — a man with whom Melissa’s “no boundaries” mom had an affair that resulted in Melissa. The man had several children in his first marriage, one of whom is Chris, and another son named Brian (also not his real name), 45.

Looking at Brian’s pics on Facebook, “no boundaries” Melissa had sexual feelings about him. She says:

“It was love at first sight, absolutely the craziest thing I have ever experienced. The sexual force was like I was levitating off the earth. Your body instantly craves the other person.”

Long story short, Brian and Melissa met and, after a quick drink at a bar, tore their clothes off and fornicated in his car.

The Cosmopolitan article then went into an extensive propaganda about “genetic sexual attraction” — a supposed phenomenon that occurs when two family members, who were separated early in life, eventually meet and experience an intense sexual attraction to each other.