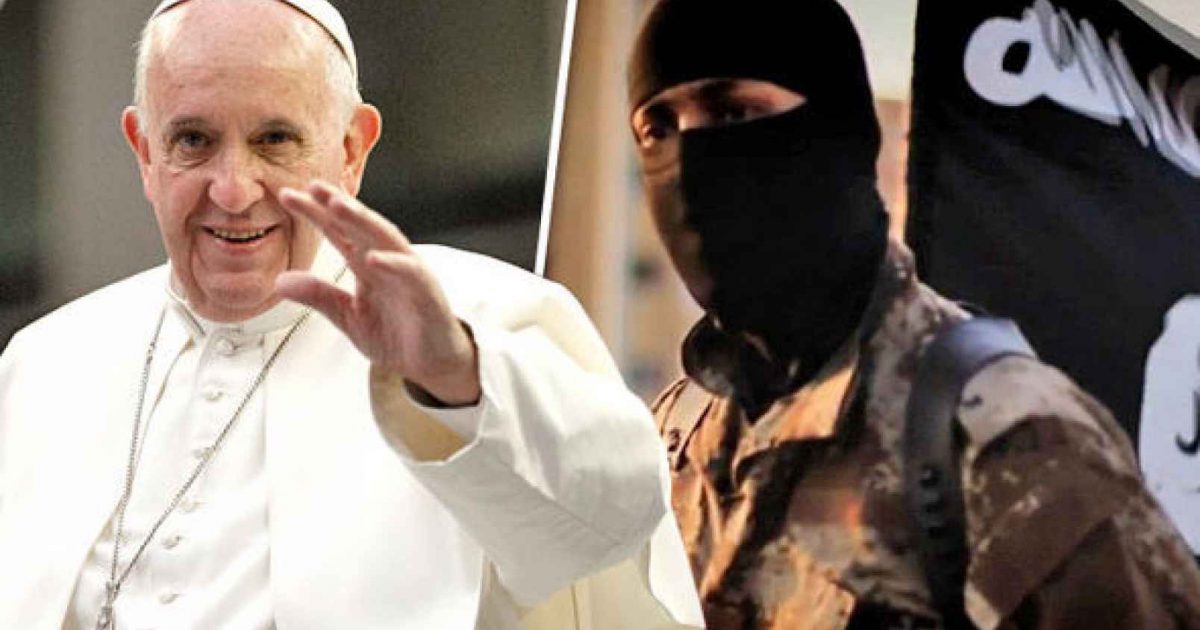 The Islamic State (ISIS) last Friday released a poster depicting Pope Francis beheaded, following quickly after its threat to attack the Vatican and draw “Christmas blood.” If the Pope has been apprised of this, he must feel piqued at their ingratitude: after all he has done for Islam, this is the thanks he gets?

After all, last September, Pope Francis met in the Vatican with Dr. Muhammad bin Abdul Karim Al-Issa, the secretary general of the Muslim World League (MWL), a group that has been linked to the financing of jihad terror. During the meeting, al-Issa thanked the Pope for his “fair positions” on what he called the “false claims that link extremism and violence to Islam.”

Nor was that the first time a Muslim leader has thanked the Pope for being so very useful.  Ahmed al-Tayeb, the Grand Imam of Cairo’s al-Azhar, thanked him for his “defense of Islam against the accusation of violence and terrorism.” AP reported that the Pope “embraced the grand imam of Al-Azhar, the prestigious Sunni Muslim center of learning, reopening an important channel for Catholic-Muslim dialogue after a five-year lull and at a time of increased Islamic extremist attacks on Christians.”

Why had there been this “five-year lull”? Because “the Cairo-based Al-Azhar froze talks with the Vatican to protest comments by then-Pope Benedict XVI.” What did Benedict say? Andrea Gagliarducci of the Catholic News Agency explains that after a jihad terrorist murdered 23 Christians in a church in Alexandria 2011, Benedict decried “terrorism” and the “strategy of violence” against Christians, and called for the Christians of the Middle East to be protected.

Al-Tayeb was furious. He railed Benedict for his “interference” in Egypt’s affairs and warned of a “negative political reaction” to the Pope’s remarks. In a statement, Al-Azhar denounced the Pope’s “repeated negative references to Islam and his claims that Muslims persecute those living among them in the Middle East.”

Benedict stood his ground, and that was that. But in September 2013, al-Azhar announced that Pope Francis had sent a personal message to al-Tayeb. In it, according to al-Azhar, Francis declared his respect for Islam and his desire to achieve “mutual understanding between the world’s Christians and Muslims in order to build peace and justice.” At the same time, Al Tayyeb met with the Apostolic Nuncio to Egypt, Mgr. Jean-Paul Gobel, and told him in no uncertain terms that speaking about Islam in a negative manner was a “red line” that must not be crossed.

So Pope Benedict condemned a jihad attack, one that al-Azhar also condemned, and yet al-Azhar suspended dialogue because of the Pope’s condemnation. Then Pope Francis wrote to the Grand Imam of al-Azhar affirming his respect for Islam, and the Grand Imam warned him that criticizing Islam was a “red line” that he must not cross. That strongly suggests that the “dialogue” that Pope Francis has now reestablished will not be allowed to discuss the Muslim persecution of Christians that will escalate worldwide, especially since an incidence of that persecution led to the suspension of dialogue in the first place.

What’s more, his dialogue partner, al-Tayeb, has shown himself over the years to be anything but a preacher of peace, cooperation and mercy: he has justified anti-Semitism on Qur’anic grounds; and called for the Islamic State murderers of the Jordanian pilot to be crucified or have their hands and feet amputated on opposite sides (as per the penalty in Qur’an 5:33 for those who make war against Allah and his messenger or spread “mischief” in the land. Al-Azhar was also revealed to be offering free copies of a book that called for the slaughter of Christians and other Infidels.

Francis, for his part, proclaimed that “authentic Islam and the proper understanding of the Koran reject every form of violence,” doing his bit to ensure that as many Christians as possible would remain ignorant and complacent about the jihad threat that his precious “dialogue” does nothing to mitigate.

And now ISIS has called for his head. If this Pope loses his head, would anyone notice?

He is a disgrace to the Church, to Judeo-Christian civilization, and to the free world.